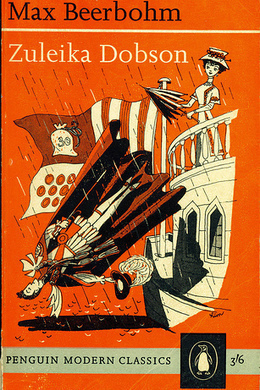 Max Beerbohm’s sparklingly wicked satire concerns the unlikely events that occur when a femme fatale briefly enters the supremely privileged, all-male domain of Judas College, Oxford. A conjurer by profession, Zuleika Dobson can only love a man who is impervious to her considerable charms: a circumstance that proves fatal, as any number of love-smitten suitors are driven to suicide by the damsel’s rejection. Laced with memorable one-liners (“Death cancels all engagements,” utters the first casualty) and inspired throughout by Beerbohm’s rococo imagination, this lyrical evocation of Edwardian undergraduate life at Oxford has, according to Forster, “a beauty unattainable by serious literature.”

That old bell, presage of a train, had just sounded through Oxford station; and the undergraduates who were waiting there, gay figures in tweed or flannel, moved to the margin of the platform and gazed idly up the line. Young and careless, in the glow of the afternoon sunshine, they struck a sharp note of incongruity with the worn boards they stood on, with the fading signals and grey eternal walls of that antique station, which, familiar to them and insignificant, does yet whisper to the tourist the last enchantments of the Middle Age.

At the door of the first-class waiting-room, aloof and venerable, stood the Warden of Judas. An ebon pillar of tradition seemed he, in his garb of old-fashioned cleric. Aloft, between the wide brim of his silk hat and the white extent of his shirt-front, appeared those eyes which hawks, that nose which eagles, had often envied. He supported his years on an ebon stick. He alone was worthy of the background.

Came a whistle from the distance. The breast of an engine was descried, and a long train curving after it, under a flight of smoke. It grew and grew. Louder and louder, its noise foreran it. It became a furious, enormous monster, and, with an instinct for safety, all men receded from the platform’s margin. (Yet came there with it, unknown to them, a danger far more terrible than itself.) Into the station it came blustering, with cloud and clangour. Ere it had yet stopped, the door of one carriage flew open, and from it, in a white travelling dress, in a toque a-twinkle with fine diamonds, a lithe and radiant creature slipped nimbly down to the platform.

A cynosure indeed! A hundred eyes were fixed on her, and half as many hearts lost to her. The Warden of Judas himself had mounted on his nose a pair of black-rimmed glasses. Him espying, the nymph darted in his direction. The throng made way for her. She was at his side.

“Grandpapa!” she cried, and kissed the old man on either cheek. (Not a youth there but would have bartered fifty years of his future for that salute.)

“My dear Zuleika,” he said, “welcome to Oxford! Have you no luggage?”

“Then,” said the Warden, “let us drive straight to College.” He offered her his arm, and they proceeded slowly to the entrance. She chatted gaily, blushing not in the long avenue of eyes she passed through. All the youths, under her spell, were now quite oblivious of the relatives they had come to meet. Parents, sisters, cousins, ran unclaimed about the platform. Undutiful, all the youths were forming a serried suite to their enchantress. In silence they followed her. They saw her leap into the Warden’s landau, they saw the Warden seat himself upon her left. Nor was it until the landau was lost to sight that they turned–how slowly, and with how bad a grace!–to look for their relatives.

Through those slums which connect Oxford with the world, the landau rolled on towards Judas. Not many youths occurred, for nearly all–it was the Monday of Eights Week–were down by the river, cheering the crews. There did, however, come spurring by, on a polo-pony, a very splendid youth. His straw hat was encircled with a riband of blue and white, and he raised it to the Warden.

“That,” said the Warden, “is the Duke of Dorset, a member of my College. He dines at my table to-night.”

Zuleika, turning to regard his Grace, saw that he had not reined in and was not even glancing back at her over his shoulder. She gave a little start of dismay, but scarcely had her lips pouted ere they curved to a smile–a smile with no malice in its corners.

As the landau rolled into “the Corn,” another youth–a pedestrian, and very different–saluted the Warden. He wore a black jacket, rusty and amorphous. His trousers were too short, and he himself was too short: almost a dwarf. His face was as plain as his gait was undistinguished. He squinted behind spectacles.

“And who is that?” asked Zuleika.

A deep flush overspread the cheek of the Warden. “That,” he said, “is also a member of Judas. His name, I believe, is Noaks.”

“Is he dining with us to-night?” asked Zuleika.

“Certainly not,” said the Warden. “Most decidedly not.”

Noaks, unlike the Duke, had stopped for an ardent retrospect. He gazed till the landau was out of his short sight; then, sighing, resumed his solitary walk.

The landau was rolling into “the Broad,” over that ground which had once blackened under the fagots lit for Latimer and Ridley. It rolled past the portals of Balliol and of Trinity, past the Ashmolean. From those pedestals which intersperse the railing of the Sheldonian, the high grim busts of the Roman Emperors stared down at the fair stranger in the equipage. Zuleika returned their stare with but a casual glance. The inanimate had little charm for her.