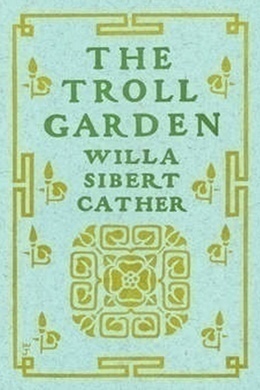 In the stories that comprise The Troll Garden, her first book, Willa Cather evokes the devastated, romantic dreams that haunt her characters. Artists, inveterate sentimentalists, hungering beauties, and demon-ridden ascetics find themselves torn between the need to confess and keep secret their private aspirations. Involved with the hope that destroys the spirit, their lives reflect both the impoverished materialism and the deadly idealism of the Plains country, of the fashionable East, and of London at the turn of the century.

Near Rattlesnake Creek, on the side of a little draw stood Canute’s shanty. North, east, south, stretched the level Nebraska plain of long rust-red grass that undulated constantly in the wind. To the west the ground was broken and rough, and a narrow strip of timber wound along the turbid, muddy little stream that had scarcely ambition enough to crawl over its black bottom. If it had not been for the few stunted cottonwoods and elms that grew along its banks, Canute would have shot himself years ago. The Norwegians are a timber-loving people, and if there is even a turtle pond with a few plum bushes around it they seem irresistibly drawn toward it.

As to the shanty itself, Canute had built it without aid of any kind, for when he first squatted along the banks of Rattlesnake Creek there was not a human being within twenty miles. It was built of logs split in halves, the chinks stopped with mud and plaster. The roof was covered with earth and was supported by one gigantic beam curved in the shape of a round arch. It was almost impossible that any tree had ever grown in that shape. The Norwegians used to say that Canute had taken the log across his knee and bent it into the shape he wished. There were two rooms, or rather there was one room with a partition made of ash saplings interwoven and bound together like big straw basket work. In one corner there was a cook stove, rusted and broken. In the other a bed made of unplaned planks and poles. It was fully eight feet long, and upon it was a heap of dark bed clothing. There was a chair and a bench of colossal proportions. There was an ordinary kitchen cupboard with a few cracked dirty dishes in it, and beside it on a tall box a tin washbasin. Under the bed was a pile of pint flasks, some broken, some whole, all empty. On the wood box lay a pair of shoes of almost incredible dimensions. On the wall hung a saddle, a gun, and some ragged clothing, conspicuous among which was a suit of dark cloth, apparently new, with a paper collar carefully wrapped in a red silk handkerchief and pinned to the sleeve. Over the door hung a wolf and a badger skin, and on the door itself a brace of thirty or forty snake skins whose noisy tails rattled ominously every time it opened. The strangest things in the shanty were the wide windowsills. At first glance they looked as though they had been ruthlessly hacked and mutilated with a hatchet, but on closer inspection all the notches and holes in the wood took form and shape. There seemed to be a series of pictures. They were, in a rough way, artistic, but the figures were heavy and labored, as though they had been cut very slowly and with very awkward instruments. There were men plowing with little horned imps sitting on their shoulders and on their horses’ heads. There were men praying with a skull hanging over their heads and little demons behind them mocking their attitudes. There were men fighting with big serpents, and skeletons dancing together. All about these pictures were blooming vines and foliage such as never grew in this world, and coiled among the branches of the vines there was always the scaly body of a serpent, and behind every flower there was a serpent’s head. It was a veritable Dance of Death by one who had felt its sting. In the wood box lay some boards, and every inch of them was cut up in the same manner. Sometimes the work was very rude and careless, and looked as though the hand of the workman had trembled. It would sometimes have been hard to distinguish the men from their evil geniuses but for one fact, the men were always grave and were either toiling or praying, while the devils were always smiling and dancing. Several of these boards had been split for kindling and it was evident that the artist did not value his work highly.

It was the first day of winter on the Divide. Canute stumbled into his shanty carrying a basket of cobs, and after filling the stove, sat down on a stool and crouched his seven foot frame over the fire, staring drearily out of the window at the wide gray sky. He knew by heart every individual clump of bunch grass in the miles of red shaggy prairie that stretched before his cabin. He knew it in all the deceitful loveliness of its early summer, in all the bitter barrenness of its autumn. He had seen it smitten by all the plagues of Egypt. He had seen it parched by drought, and sogged by rain, beaten by hail, and swept by fire, and in the grasshopper years he had seen it eaten as bare and clean as bones that the vultures have left. After the great fires he had seen it stretch for miles and miles, black and smoking as the floor of hell.