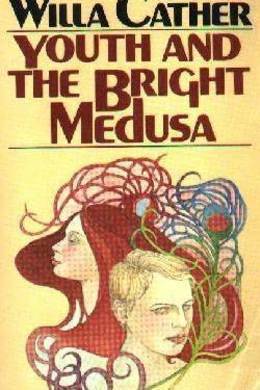 Youth and the Bright Medusa

Memorable short stories by a great American writer. “Coming, Aphrodite!” is an unforgettable novella of a young artist in New York and his relationship with a girl who hopes to become an opera star. “Paul’s Case” reveals the frustration and pain of a lonely youth from the provinces who escapes to NYC for a brief, tragic time. “Excellent..poetical interpretations of American life,” said The Nation .

Don Hedger had lived for four years on the top floor of an old house on the south side of Washington Square, and nobody had ever disturbed him. He occupied one big room with no outside exposure except on the north, where he had built in a many-paned studio window that looked upon a court and upon the roofs and walls of other buildings. His room was very cheerless, since he never got a ray of direct sunlight; the south corners were always in shadow. In one of the corners was a clothes closet, built against the partition, in another a wide divan, serving as a seat by day and a bed by night. In the front corner, the one farther from the window, was a sink, and a table with two gas burners where he sometimes cooked his food. There, too, in the perpetual dusk, was the dog’s bed, and often a bone or two for his comfort.

The dog was a Boston bull terrier, and Hedger explained his surly disposition by the fact that he had been bred to the point where it told on his nerves. His name was Caesar III, and he had taken prizes at very exclusive dog shows. When he and his master went out to prowl about University Place or to promenade along West Street, Caesar III was invariably fresh and shining. His pink skin showed through his mottled coat, which glistened as if it had just been rubbed with olive oil, and he wore a brass-studded collar, bought at the smartest saddler’s. Hedger, as often as not, was hunched up in an old striped blanket coat, with a shapeless felt hat pulled over his bushy hair, wearing black shoes that had become grey, or brown ones that had become black, and he never put on gloves unless the day was biting cold.

Early in May, Hedger learned that he was to have a new neighbour in the rear apartment–two rooms, one large and one small, that faced the west. His studio was shut off from the larger of these rooms by double doors, which, though they were fairly tight, left him a good deal at the mercy of the occupant. The rooms had been leased, long before he came there, by a trained nurse who considered herself knowing in old furniture. She went to auction sales and bought up mahogany and dirty brass and stored it away here, where she meant to live when she retired from nursing. Meanwhile, she sub-let her rooms, with their precious furniture, to young people who came to New York to “write” or to “paint”–who proposed to live by the sweat of the brow rather than of the hand, and who desired artistic surroundings.

When Hedger first moved in, these rooms were occupied by a young man who tried to write plays,–and who kept on trying until a week ago, when the nurse had put him out for unpaid rent.

A few days after the playwright left, Hedger heard an ominous murmur of voices through the bolted double doors: the lady-like intonation of the nurse–doubtless exhibiting her treasures–and another voice, also a woman’s, but very different; young, fresh, unguarded, confident. All the same, it would be very annoying to have a woman in there. The only bath-room on the floor was at the top of the stairs in the front hall, and he would always be running into her as he came or went from his bath. He would have to be more careful to see that Caesar didn’t leave bones about the hall, too; and she might object when he cooked steak and onions on his gas burner.

As soon as the talking ceased and the women left, he forgot them. He was absorbed in a study of paradise fish at the Aquarium, staring out at people through the glass and green water of their tank. It was a highly gratifying idea; the incommunicability of one stratum of animal life with another,–though Hedger pretended it was only an experiment in unusual lighting. When he heard trunks knocking against the sides of the narrow hall, then he realized that she was moving in at once. Toward noon, groans and deep gasps and the creaking of ropes, made him aware that a piano was arriving. After the tramp of the movers died away down the stairs, somebody touched off a few scales and chords on the instrument, and then there was peace. Presently he heard her lock her door and go down the hall humming something; going out to lunch, probably. He stuck his brushes in a can of turpentine and put on his hat, not stopping to wash his hands. Caesar was smelling along the crack under the bolted doors; his bony tail stuck out hard as a hickory withe, and the hair was standing up about his elegant collar.

Hedger encouraged him. “Come along, Caesar. You’ll soon get used to a new smell.”

In the hall stood an enormous trunk, behind the ladder that led to the roof, just opposite Hedger’s door. The dog flew at it with a growl of hurt amazement. They went down three flights of stairs and out into the brilliant May afternoon.