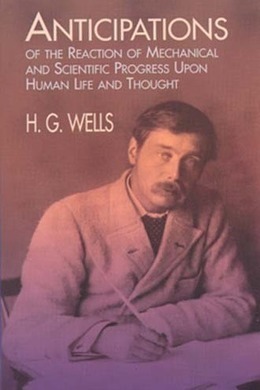 In 1901, the great writer and social critic attempted to predict the future in this book, a fascinating mix of accurate forecasts — development of cars, buses and trucks, use of flying machines in combat, decline of permanent marriage — and wild misses, including the prediction that submarines will suffocate their crews and founder at sea.

It is proposed in this book to present in as orderly an arrangement as the necessarily diffused nature of the subject admits, certain speculations about the trend of present forces, speculations which, taken all together, will build up an imperfect and very hypothetical, but sincerely intended forecast of the way things will probably go in this new century.[FN^1] Necessarily diffidence will be one of the graces of the performance. Hitherto such forecasts have been presented almost invariably in the form of fiction, and commonly the provocation of the satirical opportunity has been too much for the writer;[FN^2] the narrative form becomes more and more of a nuisance as the speculative inductions become sincerer, and here it will be abandoned altogether in favour of a texture of frank inquiries and arranged considerations. Our utmost aim is a rough sketch of the coming time, a prospectus, as it were, of the joint undertaking of mankind in facing these impending years. The reader is a prospective shareholder–he and his heirs–though whether he will find this anticipatory balance-sheet to his belief or liking is another matter.

For reasons that will develop themselves more clearly as these papers unfold, it is extremely convenient to begin with a speculation upon the probable developments and changes of the means of land locomotion during the coming decades. No one who has studied the civil history of the nineteenth century will deny how far-reaching the consequences of changes in transit may be, and no one who has studied the military performances of General Buller and General De Wet but will see that upon transport, upon locomotion, may also hang the most momentous issues of politics and war. The growth of our great cities, the rapid populating of America, the entry of China into the field of European politics are, for example, quite obviously and directly consequences of new methods of locomotion. And while so much hangs upon the development of these methods, that development is, on the other hand, a process comparatively independent, now at any rate, of most of the other great movements affected by it. It depends upon a sequence of ideas arising, and of experiments made, and upon laws of political economy, almost as inevitable as natural laws. Such great issues, supposing them to be possible, as the return of Western Europe to the Roman communion, the overthrow of the British Empire by Germany, or the inundation of Europe by the “Yellow Peril,” might conceivably affect such details, let us say, as door-handles and ventilators or mileage of line, but would probably leave the essential features of the evolution of locomotion untouched. The evolution of locomotion has a purely historical relation to the Western European peoples. It is no longer dependent upon them, or exclusively in their hands. The Malay nowadays sets out upon his pilgrimage to Mecca in an excursion steamship of iron, and the immemorial Hindoo goes a-shopping in a train, and in Japan and Australasia and America, there are plentiful hands and minds to take up the process now, even should the European let it fall.

The beginning of this twentieth century happens to coincide with a very interesting phase in that great development of means of land transit that has been the distinctive feature (speaking materially) of the nineteenth century. The nineteenth century, when it takes its place with the other centuries in the chronological charts of the future, will, if it needs a symbol, almost inevitably have as that symbol a steam engine running upon a railway. This period covers the first experiments, the first great developments, and the complete elaboration of that mode of transit, and the determination of nearly all the broad features of this century’s history may be traced directly or indirectly to that process. And since an interesting light is thrown upon the new phases in land locomotion that are now beginning, it will be well to begin this forecast with a retrospect, and to revise very shortly the history of the addition of steam travel to the resources of mankind.

A curious and profitable question arises at once. How is it that the steam locomotive appeared at the time it did, and not earlier in the history of the world?