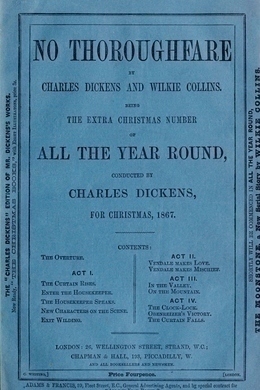 A story of mistaken identities, courage, justice, and a journey that stretches from the depths of the city of London to the Alps and the Mediterranean.

In a court-yard in the City of London, which was No Thoroughfare either for vehicles or foot-passengers; a court-yard diverging from a steep, a slippery, and a winding street connecting Tower Street with the Middlesex shore of the Thames; stood the place of business of Wilding & Co., Wine Merchants. Probably as a jocose acknowledgment of the obstructive character of this main approach, the point nearest to its base at which one could take the river (if so inodorously minded) bore the appellation Break-Neck-Stairs. The court-yard itself had likewise been descriptively entitled in old time, Cripple Corner.

Years before the year one thousand eight hundred and sixty-one, people had left off taking boat at Break-Neck-Stairs, and watermen had ceased to ply there. The slimy little causeway had dropped into the river by a slow process of suicide, and two or three stumps of piles and a rusty iron mooring-ring were all that remained of the departed Break-Neck glories. Sometimes, indeed, a laden coal barge would bump itself into the place, and certain laborious heavers, seemingly mud-engendered, would arise, deliver the cargo in the neighbourhood, shove off, and vanish; but at most times the only commerce of Break-Neck-Stairs arose out of the conveyance of casks and bottles, both full and empty, both to and from the cellars of Wilding & Co., Wine Merchants. Even that commerce was but occasional, and through three-fourths of its rising tides the dirty indecorous drab of a river would come solitarily oozing and lapping at the rusty ring, as if it had heard of the Doge and the Adriatic, and wanted to be married to the great conserver of its filthiness, the Right Honourable the Lord Mayor.

Some two hundred and fifty yards on the right, up the opposite hill (approaching it from the low ground of Break-Neck-Stairs) was Cripple Corner. There was a pump in Cripple Corner, there was a tree in Cripple Corner. All Cripple Corner belonged to Wilding and Co., Wine Merchants. Their cellars burrowed under it, their mansion towered over it. It really had been a mansion in the days when merchants inhabited the City, and had a ceremonious shelter to the doorway without visible support, like the sounding-board over an old pulpit. It had also a number of long narrow strips of window, so disposed in its grave brick front as to render it symmetrically ugly. It had also, on its roof, a cupola with a bell in it.

“When a man at five-and-twenty can put his hat on, and can say ‘this hat covers the owner of this property and of the business which is transacted on this property,’ I consider, Mr. Bintrey, that, without being boastful, he may be allowed to be deeply thankful. I don’t know how it may appear to you, but so it appears to me.”

Thus Mr. Walter Wilding to his man of law, in his own counting-house; taking his hat down from its peg to suit the action to the word, and hanging it up again when he had done so, not to overstep the modesty of nature.

An innocent, open-speaking, unused-looking man, Mr. Walter Wilding, with a remarkably pink and white complexion, and a figure much too bulky for so young a man, though of a good stature. With crispy curling brown hair, and amiable bright blue eyes. An extremely communicative man: a man with whom loquacity was the irrestrainable outpouring of contentment and gratitude. Mr. Bintrey, on the other hand, a cautious man, with twinkling beads of eyes in a large overhanging bald head, who inwardly but intensely enjoyed the comicality of openness of speech, or hand, or heart.

A decanter, two wine-glasses, and a plate of biscuits, stood on the desk.

“You like this forty-five year old port-wine?” said Mr. Wilding.

He laughed again, as he held up his glass and ogled it, at the highly ludicrous idea of giving away such wine.

“And now,” said Wilding, with a childish enjoyment in the discussion of affairs, “I think we have got everything straight, Mr. Bintrey.”

“A housekeeper advertised for–”

“Housekeeper advertised for,” said Bintrey, “‘apply personally at Cripple Corner, Great Tower Street, from ten to twelve’–to-morrow, by the bye.”

“And all charges paid.”

“And all charges paid,” said Bintrey, with a chuckle: probably occasioned by the droll circumstance that they had been paid without a haggle.