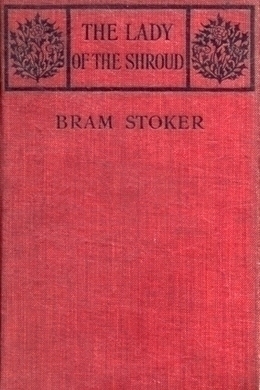 The Lady of the Shroud

The tale of Rupert Sent Leger, who has inherited huge amount of money under one condition: to keep it, he must help the people of the Blue Mountain gain their independence. Visited by a young and beautiful lady, he is in despair about whether she might be a vampire. Set in the early nineteenth century, Brams fiction The Lady of the Shroud is full of mystical and super-natural elements. A brilliant presentation of a lady who appears always in a shroud, this work engrosses the readers. The Balkan lands are presented and a slight political touch is also given towards the end. Mesmerizing!

I consider it at least useful–perhaps necessary–to have a complete and accurate record of all pertaining to the Will of my late grand-uncle Roger Melton.

To which end let me put down the various members of his family, and explain some of their occupations and idiosyncrasies. My father, Ernest Halbard Melton, was the only son of Ernest Melton, eldest son of Sir Geoffrey Halbard Melton of Humcroft, in the shire of Salop, a Justice of the Peace, and at one time Sheriff. My great-grandfather, Sir Geoffrey, had inherited a small estate from his father, Roger Melton. In his time, by the way, the name was spelled Milton; but my great-great-grandfather changed the spelling to the later form, as he was a practical man not given to sentiment, and feared lest he should in the public eye be confused with others belonging to the family of a Radical person called Milton, who wrote poetry and was some sort of official in the time of Cromwell, whilst we are Conservatives. The same practical spirit which originated the change in the spelling of the family name inclined him to go into business. So he became, whilst still young, a tanner and leather-dresser. He utilized for the purpose the ponds and streams, and also the oak-woods on his estate–Torraby in Suffolk. He made a fine business, and accumulated a considerable fortune, with a part of which he purchased the Shropshire estate, which he entailed, and to which I am therefore heir-apparent.

Sir Geoffrey had, in addition to my grandfather, three sons and a daughter, the latter being born twenty years after her youngest brother. These sons were: Geoffrey, who died without issue, having been killed in the Indian Mutiny at Meerut in 1857, at which he took up a sword, though a civilian, to fight for his life; Roger (to whom I shall refer presently); and John–the latter, like Geoffrey, dying unmarried. Out of Sir Geoffrey’s family of five, therefore, only three have to be considered: My grandfather, who had three children, two of whom, a son and a daughter, died young, leaving only my father, Roger and Patience. Patience, who was born in 1858, married an Irishman of the name of Sellenger–which was the usual way of pronouncing the name of St. Leger, or, as they spelled it, Sent Leger–restored by later generations to the still older form. He was a reckless, dare-devil sort of fellow, then a Captain in the Lancers, a man not without the quality of bravery–he won the Victoria Cross at the Battle of Amoaful in the Ashantee Campaign. But I fear he lacked the seriousness and steadfast strenuous purpose which my father always says marks the character of our own family. He ran through nearly all of his patrimony–never a very large one; and had it not been for my grand-aunt’s little fortune, his days, had he lived, must have ended in comparative poverty. Comparative, not actual; for the Meltons, who are persons of considerable pride, would not have tolerated a poverty-stricken branch of the family. We don’t think much of that lot–any of us.