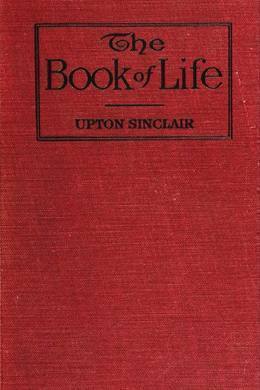 The Book of Life

Upton Sinclair, one of America’s foremost and most prolific authors, addresses the cultivation of the mind and the body. Sinclair’s goal was to attempt to tell the reader how to live, how to find health, happiness and success, and how to develop fully both the mind and the body. Part One: The Book of the Mind covers such subjects as faith, reason, morality, and the subconscious. Part Two: The Book of the Body develops such subjects as errors in diet, the fasting cure, food and poisons, work and play, and diseases and their cures .

If I could, I would begin this book by telling you what Life is. But unfortunately I do not know what Life is. The only consolation I can find is in the fact that nobody else knows either.

We ask the churches, and they tell us that male and female created He them, and put them in the Garden of Eden, and they would have been happy had not Satan tempted them. But then you ask, who made Satan, and the explanation grows vague. You ask, if God made Satan, and knew what Satan was going to do, is it not the same as if God did it himself? So this explanation of the origin of evil gets you no further than the Hindoo picture of the world resting on the back of a tortoise, and the tortoise on the head of a snake–and nothing said as to what the snake rests on.

Let us go to the scientist. I know a certain physiologist, perhaps the greatest in the world, and his eager face rises before me, and I hear his quick, impetuous voice declaring that he knows what Life is; he has told it in several big volumes, and all I have to do is to read them. Life is a tropism, caused by the presence of certain combinations of chemicals; my friend knows this, because he has produced the thing in his test-tubes. He is an exponent of a way of thought called Monism, which finds the ultimate source of being in forms of energy manifesting themselves as matter; he shows how all living things arise from that and sink back into it.

But question this scientist more closely. What is this “matter” that you are so sure of? How do you know it? Obviously, through sensations. You never know matter itself, you only know its effects upon you, and you assume that the matter must be there to cause the sensation. In other words, “matter,” which seems so real, turns out to be merely “a permanent possibility of sensation.” And suppose there were to be sensations, caused, for example, by a sportive demon who liked to make fun of eminent physiologists–then there might be the appearance of matter and nothing else; in other words, there might be mind, and various states of mind. So we discover that the materialist, in the philosophic sense, is making just as large an act of faith, is pronouncing just as bold a dogma as any priest of any religion.

This is an old-time topic of disputation. Before Mother Eddy there was Bishop Berkeley, and before Berkeley, there was Plato, and they and the materialists disputed until their hearers cried in despair, “What is Mind? No matter! What is Matter? Never mind!” But a century or two ago in a town of Prussia there lived a little, dried-up professor of philosophy, who sat himself down in his room and fixed his eyes on a church steeple outside the window, and for years on end devoted himself to examining the tools of thought with which the human mind is provided, and deciding just what work and how much of it they are fitted to do. So came the proof that our minds are incapable of reaching to or dealing with any ultimate reality whatever, but can comprehend only phenomena–that is to say, appearances–and their relations one with another. The Koenigsberg professor proved this once for all time, setting forth four propositions about ultimate reality, and proving them by exact and irrefutable logic, and then proving by equally exact and irrefutable logic their precise opposites and contraries. Anybody who has read and comprehended the four “antinomies” of Immanuel Kant[FN^1] knows that metaphysics is as dead a subject as astrology, and that all the complicated theories which the philosophers from Heraclitus to Arthur Balfour have spun like spiders out of their inner consciousness, have no more relation to reality than the intricacies of the game of chess.

The writer is sorry to make this statement, because he spent a lot of time reading these philosophers and acquainting himself with their subtle theories. He learned a whole language of long words, and even the special meanings which each philosopher or school of philosophers give to them. When he had got through, he had learned, so far as metaphysics is concerned, absolutely nothing, and had merely the job of clearing out of his mind great masses of verbal cobwebs. It was not even good intellectual training; the metaphysical method of thought is a trap. The person who thinks in absolutes and ultimates is led to believe that he has come to conclusions about reality, when as a matter of fact he has merely proved what he wants to believe; if he had wanted to believe the opposite, he could have proven that exactly as well–as his opponents will at once demonstrate.