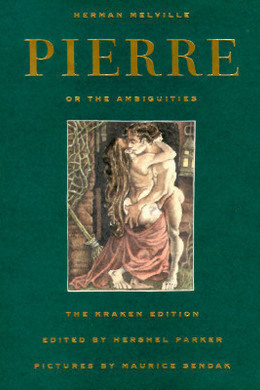 With profound moral and philosophical ideals, Melville has presented a novel that touches the heart and mind. the idiosyncratic characters are etched into the plot of the novel and fight for distinguishing between the right and wrong. an amalgamation of factors from popular fiction and gothic drama, it is a work that absorbs the attention of the reader.

There are some strange summer mornings in the country, when he who is but a sojourner from the city shall early walk forth into the fields, and be wonder-smitten with the trance-like aspect of the green and golden world. Not a flower stirs; the trees forget to wave; the grass itself seems to have ceased to grow; and all Nature, as if suddenly become conscious of her own profound mystery, and feeling no refuge from it but silence, sinks into this wonderful and indescribable repose.

Such was the morning in June, when, issuing from the embowered and high-gabled old home of his fathers, Pierre, dewily refreshed and spiritualized by sleep, gayly entered the long, wide, elm-arched street of the village, and half unconsciously bent his steps toward a cottage, which peeped into view near the end of the vista.

The verdant trance lay far and wide; and through it nothing came but the brindled kine, dreamily wandering to their pastures, followed, not driven, by ruddy-cheeked, white-footed boys.

As touched and bewitched by the loveliness of this silence, Pierre neared the cottage, and lifted his eyes, he swiftly paused, fixing his glance upon one upper, open casement there. Why now this impassioned, youthful pause? Why this enkindled cheek and eye? Upon the sill of the casement, a snow-white glossy pillow reposes, and a trailing shrub has softly rested a rich, crimson flower against it.

Well mayst thou seek that pillow, thou odoriferous flower, thought Pierre; not an hour ago, her own cheek must have rested there. “Lucy!”

As heart rings to heart those voices rang, and for a moment, in the bright hush of the morning, the two stood silently but ardently eying each other, beholding mutual reflections of a boundless admiration and love.

“Nothing but Pierre,” laughed the youth, at last; “thou hast forgotten to bid me good-morning.”

“That would be little. Good-mornings, good-evenings, good days, weeks, months, and years to thee, Pierre;–bright Pierre!–Pierre!”

Truly, thought the youth, with a still gaze of inexpressible fondness; truly the skies do ope, and this invoking angel looks down.–“I would return thee thy manifold good-mornings, Lucy, did not that presume thou had’st lived through a night; and by Heaven, thou belong’st to the regions of an infinite day!”

“Because in us love is profane, since it mortally reaches toward the heaven in ye!”

“There thou fly’st again, Pierre; thou art always circumventing me so. Tell me, why should ye youths ever show so sweet an expertness in turning all trifles of ours into trophies of yours?”

“I know not how that is, but ever was it our fashion to do.” And shaking the casement shrub, he dislodged the flower, and conspicuously fastened it in his bosom.–“I must away now, Lucy; see! under these colors I march.”

“Bravissimo! oh, my only recruit!”

Pierre was the only son of an affluent, and haughty widow; a lady who externally furnished a singular example of the preservative and beautifying influences of unfluctuating rank, health, and wealth, when joined to a fine mind of medium culture, uncankered by any inconsolable grief, and never worn by sordid cares. In mature age, the rose still miraculously clung to her cheek; litheness had not yet completely uncoiled itself from her waist, nor smoothness unscrolled itself from her brow, nor diamondness departed from her eyes. So that when lit up and bediademed by ball-room lights, Mrs. Glendinning still eclipsed far younger charms, and had she chosen to encourage them, would have been followed by a train of infatuated suitors, little less young than her own son Pierre.

But a reverential and devoted son seemed lover enough for this widow Bloom; and besides all this, Pierre when namelessly annoyed, and sometimes even jealously transported by the too ardent admiration of the handsome youths, who now and then, caught in unintended snares, seemed to entertain some insane hopes of wedding this unattainable being; Pierre had more than once, with a playful malice, openly sworn, that the man–gray-beard, or beardless–who should dare to propose marriage to his mother, that man would by some peremptory unrevealed agency immediately disappear from the earth.

This romantic filial love of Pierre seemed fully returned by the triumphant maternal pride of the widow, who in the clear-cut lineaments and noble air of the son, saw her own graces strangely translated into the opposite sex. There was a striking personal resemblance between them; and as the mother seemed to have long stood still in her beauty, heedless of the passing years; so Pierre seemed to meet her half-way, and by a splendid precocity of form and feature, almost advanced himself to that mature stand-point in Time, where his pedestaled mother so long had stood.