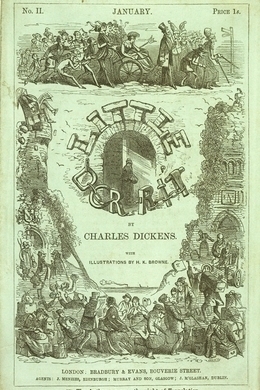 As for many of Dickens’ novels, highlighting social injustices is at the heart of Little Dorrit. His father was imprisoned for debt, and Dickens’ shines a spotlight on the fate of many who are unable to repay a debt when the ability to seek work is denied. Amy Dorrit is the youngest daughter of a man imprisoned for debt and is working as a seamstress for Mrs Clennam when Arthur Clennam crosses her path. Will the sweet natured Amy win Arthur’s heart? And will they ever escape the shadow of debtors’ prison?

Thirty years ago, Marseilles lay burning in the sun, one day.

A blazing sun upon a fierce August day was no greater rarity in southern France then, than at any other time, before or since. Everything in Marseilles, and about Marseilles, had stared at the fervid sky, and been stared at in return, until a staring habit had become universal there. Strangers were stared out of countenance by staring white houses, staring white walls, staring white streets, staring tracts of arid road, staring hills from which verdure was burnt away. The only things to be seen not fixedly staring and glaring were the vines drooping under their load of grapes. These did occasionally wink a little, as the hot air barely moved their faint leaves.

There was no wind to make a ripple on the foul water within the harbour, or on the beautiful sea without. The line of demarcation between the two colours, black and blue, showed the point which the pure sea would not pass; but it lay as quiet as the abominable pool, with which it never mixed. Boats without awnings were too hot to touch; ships blistered at their moorings; the stones of the quays had not cooled, night or day, for months. Hindoos, Russians, Chinese, Spaniards, Portuguese, Englishmen, Frenchmen, Genoese, Neapolitans, Venetians, Greeks, Turks, descendants from all the builders of Babel, come to trade at Marseilles, sought the shade alike–taking refuge in any hiding-place from a sea too intensely blue to be looked at, and a sky of purple, set with one great flaming jewel of fire.

The universal stare made the eyes ache. Towards the distant line of Italian coast, indeed, it was a little relieved by light clouds of mist, slowly rising from the evaporation of the sea, but it softened nowhere else. Far away the staring roads, deep in dust, stared from the hill-side, stared from the hollow, stared from the interminable plain. Far away the dusty vines overhanging wayside cottages, and the monotonous wayside avenues of parched trees without shade, drooped beneath the stare of earth and sky. So did the horses with drowsy bells, in long files of carts, creeping slowly towards the interior; so did their recumbent drivers, when they were awake, which rarely happened; so did the exhausted labourers in the fields. Everything that lived or grew, was oppressed by the glare; except the lizard, passing swiftly over rough stone walls, and the cicala, chirping his dry hot chirp, like a rattle. The very dust was scorched brown, and something quivered in the atmosphere as if the air itself were panting.

Blinds, shutters, curtains, awnings, were all closed and drawn to keep out the stare. Grant it but a chink or keyhole, and it shot in like a white-hot arrow. The churches were the freest from it. To come out of the twilight of pillars and arches–dreamily dotted with winking lamps, dreamily peopled with ugly old shadows piously dozing, spitting, and begging–was to plunge into a fiery river, and swim for life to the nearest strip of shade. So, with people lounging and lying wherever shade was, with but little hum of tongues or barking of dogs, with occasional jangling of discordant church bells and rattling of vicious drums, Marseilles, a fact to be strongly smelt and tasted, lay broiling in the sun one day. In Marseilles that day there was a villainous prison. In one of its chambers, so repulsive a place that even the obtrusive stare blinked at it, and left it to such refuse of reflected light as it could find for itself, were two men. Besides the two men, a notched and disfigured bench, immovable from the wall, with a draught-board rudely hacked upon it with a knife, a set of draughts, made of old buttons and soup bones, a set of dominoes, two mats, and two or three wine bottles. That was all the chamber held, exclusive of rats and other unseen vermin, in addition to the seen vermin, the two men.

It received such light as it got through a grating of iron bars fashioned like a pretty large window, by means of which it could be always inspected from the gloomy staircase on which the grating gave. There was a broad strong ledge of stone to this grating where the bottom of it was let into the masonry, three or four feet above the ground. Upon it, one of the two men lolled, half sitting and half lying, with his knees drawn up, and his feet and shoulders planted against the opposite sides of the aperture. The bars were wide enough apart to admit of his thrusting his arm through to the elbow; and so he held on negligently, for his greater ease.