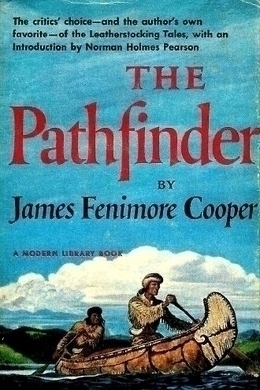 Vigorous, self-reliant, amazingly resourceful, and moral, Natty Bumppo is the prototype of the Western hero. A faultless arbiter of wilderness justice, he hates middle-class hypocrisy. But he finds his love divided between the woman he has pledged to protect on a treacherous journey and the untouched forest that sustains him in his beliefs. A fast-paced narrative full of adventure and majestic descriptions of early frontier life, Indian raiders, and defenseless outposts, The Pathfinder set the standard for epic action literature.

The sublimity connected with vastness is familiar to every eye. The most abstruse, the most far-reaching, perhaps the most chastened of the poet’s thoughts, crowd on the imagination as he gazes into the depths of the illimitable void. The expanse of the ocean is seldom seen by the novice with indifference; and the mind, even in the obscurity of night, finds a parallel to that grandeur, which seems inseparable from images that the senses cannot compass. With feelings akin to this admiration and awe–the offspring of sublimity–were the different characters with which the action of this tale must open, gazing on the scene before them. Four persons in all,–two of each sex,–they had managed to ascend a pile of trees, that had been uptorn by a tempest, to catch a view of the objects that surrounded them. It is still the practice of the country to call these spots wind-rows. By letting in the light of heaven upon the dark and damp recesses of the wood, they form a sort of oases in the solemn obscurity of the virgin forests of America. The particular wind-row of which we are writing lay on the brow of a gentle acclivity; and, though small, it had opened the way for an extensive view to those who might occupy its upper margin, a rare occurrence to the traveller in the woods. Philosophy has not yet determined the nature of the power that so often lays desolate spots of this description; some ascribing it to the whirlwinds which produce waterspouts on the ocean, while others again impute it to sudden and violent passages of streams of the electric fluid; but the effects in the woods are familiar to all. On the upper margin of the opening, the viewless influence had piled tree on tree, in such a manner as had not only enabled the two males of the party to ascend to an elevation of some thirty feet above the level of the earth, but, with a little care and encouragement, to induce their more timid companions to accompany them. The vast trunks which had been broken and driven by the force of the gust lay blended like jack-straws; while their branches, still exhaling the fragrance of withering leaves, were interlaced in a manner to afford sufficient support to the hands. One tree had been completely uprooted, and its lower end, filled with earth, had been cast uppermost, in a way to supply a sort of staging for the four adventurers, when they had gained the desired distance from the ground.

The reader is to anticipate none of the appliances of people of condition in the description of the personal appearances of the group in question. They were all wayfarers in the wilderness; and had they not been, neither their previous habits, nor their actual social positions, would have accustomed them to many of the luxuries of rank. Two of the party, indeed, a male and female, belonged to the native owners of the soil, being Indians of the well-known tribe of the Tuscaroras; while their companions were–a man, who bore about him the peculiarities of one who had passed his days on the ocean, and was, too, in a station little, if any, above that of a common mariner; and his female associate, who was a maiden of a class in no great degree superior to his own; though her youth, sweetness and countenance, and a modest, but spirited mien, lent that character of intellect and refinement which adds so much to the charm of beauty in the sex. On the present occasion, her full blue eye reflected the feeling of sublimity that the scene excited, and her pleasant face was beaming with the pensive expression with which all deep emotions, even though they bring the most grateful pleasure, shadow the countenances of the ingenuous and thoughtful.