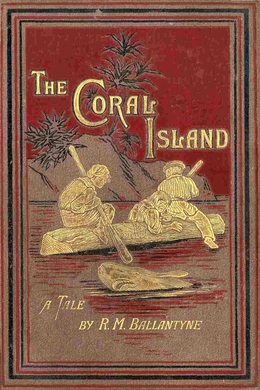 A Tale of the Pacific Ocean

Fifteen-year-old Ralph, mischievous young Peterkin and clever, brave Jack are shipwrecked on a coral reef with only a telescope and a broken pocketknife between them. At first the island seems a paradise, with its plentiful foods and wealth of natural wonders. But then a party of cannibals arrives, and after that a pirate ship…what is to become of them?

The sequel, The Gorilla Hunters, is also available.

Roving has always been, and still is, my ruling passion, the joy of my heart, the very sunshine of my existence. In childhood, in boyhood, and in man’s estate, I have been a rover; not a mere rambler among the woody glens and upon the hill-tops of my own native land, but an enthusiastic rover throughout the length and breadth of the wide wide world.

It was a wild, black night of howling storm, the night in which I was born on the foaming bosom of the broad Atlantic Ocean. My father was a sea-captain; my grandfather was a sea-captain; my great-grandfather had been a marine. Nobody could tell positively what occupation his father had followed; but my dear mother used to assert that he had been a midshipman, whose grandfather, on the mother’s side, had been an admiral in the royal navy. At anyrate we knew that, as far back as our family could be traced, it had been intimately connected with the great watery waste. Indeed this was the case on both sides of the house; for my mother always went to sea with my father on his long voyages, and so spent the greater part of her life upon the water.

Thus it was, I suppose, that I came to inherit a roving disposition. Soon after I was born, my father, being old, retired from a seafaring life, purchased a small cottage in a fishing village on the west coast of England, and settled down to spend the evening of his life on the shores of that sea which had for so many years been his home. It was not long after this that I began to show the roving spirit that dwelt within me. For some time past my infant legs had been gaining strength, so that I came to be dissatisfied with rubbing the skin off my chubby knees by walking on them, and made many attempts to stand up and walk like a man; all of which attempts, however, resulted in my sitting down violently and in sudden surprise. One day I took advantage of my dear mother’s absence to make another effort; and, to my joy, I actually succeeded in reaching the doorstep, over which I tumbled into a pool of muddy water that lay before my father’s cottage door. Ah, how vividly I remember the horror of my poor mother when she found me sweltering in the mud amongst a group of cackling ducks, and the tenderness with which she stripped off my dripping clothes and washed my dirty little body! From this time forth my rambles became more frequent, and, as I grew older, more distant, until at last I had wandered far and near on the shore and in the woods around our humble dwelling, and did not rest content until my father bound me apprentice to a coasting vessel, and let me go to sea.

For some years I was happy in visiting the sea-ports, and in coasting along the shores of my native land. My Christian name was Ralph, and my comrades added to this the name of Rover, in consequence of the passion which I always evinced for travelling. Rover was not my real name, but as I never received any other I came at last to answer to it as naturally as to my proper name; and, as it is not a bad one, I see no good reason why I should not introduce myself to the reader as Ralph Rover. My shipmates were kind, good-natured fellows, and they and I got on very well together. They did, indeed, very frequently make game of and banter me, but not unkindly; and I overheard them sometimes saying that Ralph Rover was a “queer, old-fashioned fellow.” This, I must confess, surprised me much, and I pondered the saying long, but could come at no satisfactory conclusion as to that wherein my old-fashionedness lay. It is true I was a quiet lad, and seldom spoke except when spoken to. Moreover, I never could understand the jokes of my companions even when they were explained to me: which dulness in apprehension occasioned me much grief; however, I tried to make up for it by smiling and looking pleased when I observed that they were laughing at some witticism which I had failed to detect. I was also very fond of inquiring into the nature of things and their causes, and often fell into fits of abstraction while thus engaged in my mind. But in all this I saw nothing that did not seem to be exceedingly natural, and could by no means understand why my comrades should call me “an old-fashioned fellow.”