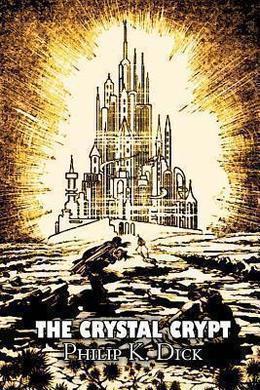 Stark terror ruled the Inner-Flight ship on that last Mars-Terra run. For the black-clad Leiters were on the prowl … and the grim red planet was not far behind. In the distant future, when Earth and Mars are on the verge of war, the last Earthmen departing the red planet are held up by Martian soldiers searching for three saboteurs who destroyed an entire Martian city—an event that will quickly bring the precarious interplanetary conflict to a head.

The metallic rasp of the speaker echoed through the corridors of the great ship. The passengers glanced at each other uneasily, murmuring and peering out the port windows at the small speck below, the dot of rock that was the Martian checkpoint, Deimos.

“What’s up?” an anxious passenger asked one of the pilots, hurrying through the ship to check the escape lock.

“We have to land. Keep seated.” The pilot went on.

“Land? But why?” They all looked at each other. Hovering above the bulging Inner-Flight ship were three slender Martian pursuit craft, poised and alert for any emergency. As the Inner-Flight ship prepared to land the pursuit ships dropped lower, carefully maintaining themselves a short distance away.

“There’s something going on,” a woman passenger said nervously. “Lord, I thought we were finally through with those Martians. Now what?”

“I don’t blame them for giving us one last going over,” a heavy-set business man said to his companion. “After all, we’re the last ship leaving Mars for Terra. We’re damn lucky they let us go at all.”

“You think there really will be war?” A young man said to the girl sitting in the seat next to him. “Those Martians won’t dare fight, not with our weapons and ability to produce. We could take care of Mars in a month. It’s all talk.”

The girl glanced at him. “Don’t be so sure. Mars is desperate. They’ll fight tooth and nail. I’ve been on Mars three years.” She shuddered. “Thank goodness I’m getting away. If–”

“Prepare to land!” the pilot’s voice came. The ship began to settle slowly, dropping down toward the tiny emergency field on the seldom visited moon. Down, down the ship dropped. There was a grinding sound, a sickening jolt. Then silence.

“We’ve landed,” the heavy-set business man said. “They better not do anything to us! Terra will rip them apart if they violate one Space Article.”

“Please keep your seats,” the pilot’s voice came. “No one is to leave the ship, according to the Martian authorities. We are to remain here.”

A restless stir filled the ship. Some of the passengers began to read uneasily, others stared out at the deserted field, nervous and on edge, watching the three Martian pursuit ships land and disgorge groups of armed men.

The Martian soldiers were crossing the field quickly, moving toward them, running double time.

This Inner-Flight spaceship was the last passenger vessel to leave Mars for Terra. All other ships had long since left, returning to safety before the outbreak of hostilities. The passengers were the very last to go, the final group of Terrans to leave the grim red planet, business men, expatriates, tourists, any and all Terrans who had not already gone home.

“What do you suppose they want?” the young man said to the girl. “It’s hard to figure Martians out, isn’t it? First they give the ship clearance, let us take off, and now they radio us to set down again. By the way, my name’s Thacher, Bob Thacher. Since we’re going to be here awhile–”