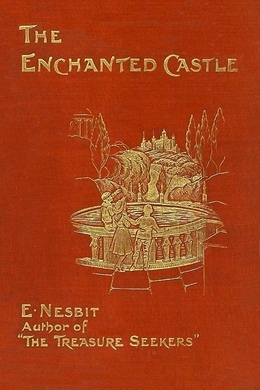 Three children discover an old country estate during their school holidays. When they’re exploring it they come upon a mysterious young girl claiming to be a fairy princess. She shows them the castle’s treasure, including a ring that will turn you invisible. But no one is more surprised than she when she slips it on her finger … and disappears! The ring is indeed magical, and the children waste no time finding out what else it can do.

THERE were three of them–Jerry, Jimmy, and Kathleen. Of course, Jerry’s name was Gerald, and not Jeremiah, whatever you may think; and Jimmy’s name was James; and Kathleen was never called by her name at all, but Cathy, or Catty, or Puss Cat, when her brothers were pleased with her, and Scratch Cat when they were not pleased. And they were at school in a little town in the West of England–the boys at one school, of course, and the girl at another, because the sensible habit of having boys and girls at the same school is not yet as common as I hope it will be some day. They used to see each other on Saturdays and Sundays at the house of a kind maiden lady; but it was one of those houses where it is impossible to play. You know the kind of house, don’t you? There is a sort of a something about that kind of house that makes you hardly able even to talk to each other when you are left alone, and playing seems unnatural and affected. So they looked forward to the holidays, when they should all go home and be together all day long, in a house where playing was natural and conversation possible, and where the Hampshire forests and fields were full of interesting things to do and see. Their Cousin Betty was to be there too, and there were plans. Betty’s school broke up before theirs, and so she got to the Hampshire home first, and the moment she got there she began to have measles, so that my three couldn’t go home at all. You may imagine their feelings. The thought of seven weeks at Miss Hervey’s was not to be borne, and all three wrote home and said so. This astonished their parents very much, because they had always thought it was so nice for the children to have dear Miss Hervey’s to go to. However, they were “jolly decent about it,” as Jerry said, and after a lot of letters and telegrams, it was arranged that the boys should go and stay at Kathleen’s school, where there were now no girls left and no mistresses except the French one.

“It’ll be better than being at Miss Hervey’s,” said Kathleen, when the boys came round to ask Mademoiselle when it would be convenient for them to come; “and, besides, our school’s not half so ugly as yours. We do have tablecloths on the tables and curtains at the windows, and yours is all deal boards, and desks, and inkiness.”

When they had gone to pack their boxes Kathleen made all the rooms as pretty as she could with flowers in jam jars, marigolds chiefly, because there was nothing much else in the back garden. There were geraniums in the front garden, and calceolarias and lobelias; of course, the children were not allowed to pick these.

“We ought to have some sort of play to keep us going through the holidays,” said Kathleen, when tea was over, and she had unpacked and arranged the boys’ clothes in the painted chests of drawers, feeling very grown-up and careful as she neatly laid the different sorts of clothes in tidy little heaps in the drawers. “Suppose we write a book.”

“I didn’t mean me, of course,” said Kathleen, a little injured; “I meant us.”

“Too much fag,” said Gerald briefly.

“If we wrote a book,” Kathleen persisted, “about what the insides of schools really are like, people would read it and say how clever we were.”

“More likely expel us,” said Gerald. “No; we’ll have an out-of-doors game–bandits, or something like that. It wouldn’t be bad if we could get a cave and keep stores in it, and have our meals there.”

“There aren’t any caves,” said Jimmy, who was fond of contradicting every one. “And, besides, your precious Mamselle won’t let us go out alone, as likely as not.”

“Like that?” Kathleen pointed the thumb of scorn at him, and he looked in the glass.

“To brush his hair and his clothes and to wash his face and hands was to our hero but the work of a moment,” said Gerald, and went to suit the action to the word.

It was a very sleek boy, brown and thin and interesting-looking, that knocked at the door of the parlour where Mademoiselle sat reading a yellow-covered book and wishing vain wishes. Gerald could always make himself look interesting at a moment’s notice, a very useful accomplishment in dealing with strange grown-ups. It was done by opening his grey eyes rather wide, allowing the corners of his mouth to droop, and assuming a gentle, pleading expression, resembling that of the late little Lord Fauntleroy–who must, by the way, be quite old now, and an awful prig.