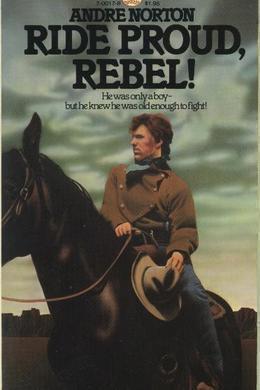 Civil war buffs and historical fiction fans alike will enjoy Andre Norton’s Ride Proud, Rebel! This detailed and emotionally resonant account focuses on the personal sacrifices and astounding courage of rebel soldiers in the waning days of the Confederacy.

The stocky roan switched tail angrily against a persistent fly and lipped water, dripping big drops back to the surface of the brook. His rider moved swiftly, with an economy of action, to unsaddle, wipe the besweated back with a wisp of last year’s dried grass, and wash down each mud-spattered leg with stream water. Always care for the mount first–when a man’s life, as well as the safety of his mission, depended on four subordinate legs more than on his own two.

Though he had little claim to a thoroughbred’s points, the roan was as much a veteran of the forces as his groom, with all a veteran’s ability to accept and enjoy small favors of the immediate present without speculating too much concerning the future. He blew gustily in pleasure under the attention and began to sample a convenient stand of spring green.

His mount cared for, Drew Rennie swung up saddle, blanket, and the meager possessions which he had brought out of Virginia two weeks ago, to the platform in a crooked tree overhanging the brook. He settled beside them on the well-seasoned timbers of the old tree house to rummage through his saddlebags.

The platform had been there a long time–before Chickamauga and the Ohio Raid, before the first roll of drums in ‘61. Drew pulled a creased shirt out of the bags and sat with it draped over one knee, remembering….

Sheldon Barrett and he–they had built it together one hot week in summer–had named it Boone’s Fort. And it was the only thing at Red Springs Drew had really ever owned. His dark eyes were fixed now on something more than the branches about him, and his mouth tightened until his face was not quite sullen, only shuttered.

Five years ago–only five years? Yes, five years next month! But the past two years of his own personal freedom–and war–those seemed to equal ten. Now there was no one left to remember the fort’s existence, which made it perfect for his present purpose.

The warmth of the sun, beating down through yet young leaves, made Drew brush his battered slouch hat to the flooring and luxuriate in the heat. Sometimes he didn’t think he’d ever get the bite of last winter’s cold out of his bones. The light pointed up every angle of jaw and cheekbone, making it clear that experience–hard experience–and not years had melted away boyish roundness of chin line, narrowed the watchful eyes ever alert to his surroundings. A cavalry scout was wary, or he ceased to be a scout, or maybe even alive.

Shirt in hand, Drew dropped lightly to the ground and with the same dispatch as he had cared for his horse, made his own toilet, scrubbing his too-thin body with a sigh of content as heartfelt as that the roan had earlier voiced.

The fresh shirt was a dark brown-gray, but the patched breeches were Yankee blue, and the boots he pulled on when he had bathed were also the enemy’s gift, good stout leather he’d been lucky enough to find in a supply wagon they had captured a month ago. Butternut shirt, Union pants and boots–the unofficial standard uniform of most any trooper of the Army of the Tennessee in this month of May, 1864. And he had garments which were practically intact. What was one patch on the seat nowadays?

For the first time Drew grinned at his reflection in the small mirror he had been using, when he scraped a half week’s accumulation of soft beard from his face. Sure, he was all spruced up now, ready to make a polite courtesy call at the big house. The grin did not fade, but was gone in a flash, leaving no hint of softness now about his gaunt features, no light in the intent, measuring depths of his dark gray eyes.

A call at Red Springs was certainly the last thing in the world for him to consider seriously. His last interview within its walls could still make him wince when he recalled it, word by scalding word. No, there was no place for a Rennie–and a Rebel Rennie to make matters blacker–under the righteous roof of Alexander Mattock!

Hatred could be a red-hot burning to choke a man’s throat, leaving him speechless and hurting inside. Since he had ridden out of Red Springs he had often been cold, very often hungry–and under orders willingly, which would have surprised his grandfather–but in another way he had been free as never before in all his life. In the army, the past did not matter at all if one did one’s job well. And in the army, the civilian world was as far away as if it were conducted in the cold chasms of the moon.

Drew leaned back against the tree trunk, wanting to yield to the soft wind and the swinging privacy of the embowered tree house, wanting to forget everything and just lie there for a while in the only part of the past he remembered happily.