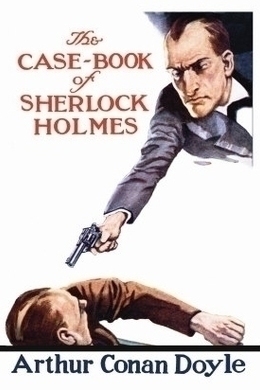 The Casebook of Sherlock Holmes

Read the final twelve stories that Arthur Conan Doyle wrote about his brilliant detective. It is perhaps the most unusual and certainly the darkest collection that he penned. Treachery, mutilation, and the terrible consequences of infidelity are just some of the themes explored in this collection, along with atmospheric touches of the gothic involving a bloodsucking vampire, crypts at midnight and strange bones in a furnace. The challenging and often bizarre tales reflect the mood of the 1920’s when they were written. Amid this grey miasma of crime stands the shining figure of Sherlock Holmes who is there to unravel even the most baffling mystery.

It was pleasant to Dr. Watson to find himself once more in the untidy room of the first floor in Baker Street which had been the starting-point of so many remarkable adventures. He looked round him at the scientific charts upon the wall, the acid-charred bench of chemicals, the violin-case leaning in the corner, the coal-scuttle, which contained of old the pipes and tobacco. Finally, his eyes came round to the fresh and smiling face of Billy, the young but very wise and tactful page, who had helped a little to fill up the gap of loneliness and isolation which surrounded the saturnine figure of the great detective.

“It all seems very unchanged, Billy. You don’t change, either. I hope the same can be said of him?”

Billy glanced with some solicitude at the closed door of the bedroom.

It was seven in the evening of a lovely summer’s day, but Dr. Watson was sufficiently familiar with the irregularity of his old friend’s hours to feel no surprise at the idea.

“That means a case, I suppose?”

“Yes, sir, he is very hard at it just now. I’m frightened for his health. He gets paler and thinner, and he eats nothing. ‘When will you be pleased to dine, Mr. Holmes?’ Mrs. Hudson asked. ‘Seven-thirty, the day after to-morrow,’ said he. You know his way when he is keen on a case.”

“He’s following someone. Yesterday he was out as a workman looking for a job. To-day he was an old woman. Fairly took me in, he did, and I ought to know his ways by now.” Billy pointed with a grin to a very baggy parasol which leaned against the sofa. “That’s part of the old woman’s outfit,” he said.

“But what is it all about, Billy?”

Billy sank his voice, as one who discusses great secrets of State. “I don’t mind telling you, sir, but it should go no farther. It’s this case of the Crown diamond.”

“Yes, sir. They must get it back, sir. Why, we had the Prime Minister and the Home Secretary both sitting on that very sofa. Mr. Holmes was very nice to them. He soon put them at their ease and promised he would do all he could. Then there is Lord Cantlemere –”

“Yes, sir, you know what that means. He’s a stiff’un, sir, if I may say so. I can get along with the Prime Minister, and I’ve nothing against the Home Secretary, who seemed a civil, obliging sort of man, but I can’t stand his Lordship. Neither can Mr. Holmes, sir. You see, he don’t believe in Mr. Holmes and he was against employing him. He’d rather he failed.”

“Mr. Holmes always knows whatever there is to know.”

“Well, we’ll hope he won’t fail and that Lord Cantlemere will be confounded. But I say, Billy, what is that curtain for across the window?”

“Mr. Holmes had it put up there three days ago. We’ve got something funny behind it.”

Billy advanced and drew away the drapery which screened the alcove of the bow window.

Dr. Watson could not restrain a cry of amazement. There was a facsimile of his old friend, dressing-gown and all, the face turned three-quarters towards the window and downward, as though reading an invisible book, while the body was sunk deep in an armchair. Billy detached the head and held it in the air.

“We put it at different angles, so that it may seem more lifelike. I wouldn’t dare touch it if the blind were not down. But when it’s up you can see this from across the way.”

“We used something of the sort once before.”

“Before my time,” said Billy. He drew the window curtains apart and looked out into the street. “There are folk who watch us from over yonder. I can see a fellow now at the window. Have a look for yourself.”

Watson had taken a step forward when the bedroom door opened, and the long, thin form of Holmes emerged, his face pale and drawn, but his step and bearing as active as ever. With a single spring he was at the window, and had drawn the blind once more.