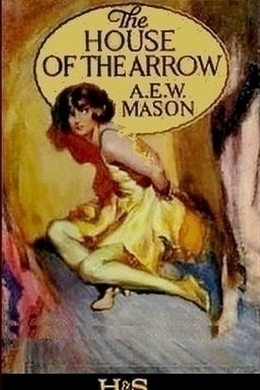 The House of the Arrow

The House of the Arrow is a detective novel that has inspired movies in French in English, featuring the fictional French detective Inspector Hanaud. When Jeanne-Marie Harlowe is poisoned and her adopted daughter is accused of murder, Inspector Hanaud is called in to investigate.

MESSRS. FROBISHER & HASLITT, the solicitors on the east side of Russell Square, counted amongst their clients a great many who had undertakings established in France; and the firm was very proud of this branch of its business.

“It gives us a place in history,” Mr. Jeremy Haslitt used to say. “For it dates from the year 1806, when Mr. James Frobisher, then our very energetic senior partner, organized the escape of hundreds of British subjects who were detained in France by the edict of the first Napoleon. The firm received the thanks of His Majesty’s Government and has been fortunate enough to retain the connection thus made. I look after that side of our affairs myself.”

Mr. Haslitt’s daily batch of letters, therefore, contained as a rule a fair number bearing the dark-blue stamp of France upon their envelopes. On this morning of early April, however, there was only one. It was addressed in a spidery, uncontrolled hand with which Mr. Haslitt was unfamiliar. But it bore the postmark of Dijon, and Mr. Haslitt tore it open rather quickly. He had a client in Dijon, a widow, Mrs. Harlowe, of whose health he had had bad reports. The letter was certainly written from her house, La Maison Grenelle, but not by her. He turned to the signature.

“Waberski?” he said, with a frown. “Boris Waberski?” And then, as he identified his correspondent, “Oh, yes, yes.”

He sat down in his chair and read. The first part of the letter was merely flowers and compliments, but half-way down the second page its object was made clear as glass. It was five hundred pounds. Old Mr. Haslitt smiled and read on, keeping up, whilst he read, a one-sided conversation with the writer.

“I have a great necessity of that money,” wrote Boris, “and–”

“I am quite sure of that,” said Mr. Haslitt.

”– cannot live for long, in spite of all the care and attention I give to her,” Boris Waberski went on. “She has left me, as no doubt you know, a large share of her fortune. Already, then, it is mine–yes? One may say so and be favourably understood. We must look at the facts with the eyes. Expedite me, then, by the recommended post a little of what is mine and agree my distinguished salutations.”

Haslitt’s smile became a broad grin. He had in one of his tin boxes a copy of the will of Jeanne-Marie Harlowe drawn up in due form by her French notary at Dijon, by which every farthing she possessed was bequeathed without condition to her husband’s niece and adopted daughter, Betty Harlowe. Jeremy Haslitt almost destroyed that letter. He folded it; his fingers twitched at it; there was already actually a tear at the edges of the sheets when he changed his mind.

“No,” he said to himself. “No! With the Boris Waberskis one never knows,” and he locked the letter away on a ledge of his private safe.

He was very glad that he had when three weeks later he read, in the obituary column of The Times, the announcement of Mrs. Harlowe’s death, and received a big card with a very deep black border in the French style from Betty Harlowe inviting him to the funeral at Dijon. The invitation was merely formal. He could hardly have reached Dijon in time for the ceremony had he started off at that instant. He contented himself with writing a few lines of sincere condolence to the girl, and a letter to the French notary in which he placed the services of the firm at Betty’s disposal. Then he waited.

“I shall hear again from little Boris,” he said, and he heard within the week. The handwriting was more spidery and uncontrolled than ever; hysteria and indignation had played havoc with Waberski’s English; also he had doubled his demand.

“It is outside belief,” he wrote. “Nothing has she left to her so attentive brother. There is something here I do not much like. It must be one thousand pounds now, by the recommended post. ‘You have always had the world against you, my poor Boris,’ she say with the tears all big in her dear eyes. ‘But I make all right for you in my will.’ And now nothing! I speak, of course, to my niece–ah, that hard one! She snap her the fingers at me! Is that a behaviour? One thousand pounds, mister! Otherwise there will be awkwardnesses! Yes! People do not snap them the fingers at Boris Waberski without the payment. So one thousand pounds by the recommended post or awkwardnesses”; and this time Boris Waberski did not invite Mr. Haslitt to agree any salutations, distinguished or otherwise, but simply signed his name with a straggling pen which shot all over the sheet.