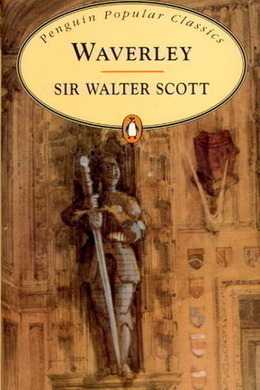 Waverley is set during the Jacobite Rebellion of 1745, which sought to restore the Stuart dynasty in the person of Charles Edward Stuart (or ‘Bonnie Prince Charlie’). It relates the story of a young dreamer and English soldier, Edward Waverley, who was sent to Scotland in 1745. He journeys North from his aristocratic family home, Waverley-Honour, in the south of England (alleged in an English Heritage notice to refer to Waverley Abbey in Surrey) first to the Scottish Lowlands and the home of family friend Baron Bradwardine, then into the Highlands and the heart of the 1745 Jacobite uprising and aftermath.

The title of this work has not been chosen without the grave and solid deliberation which matters of importance demand from the prudent. Even its first, or general denomination, was the result of no common research or selection, although, according to the example of my predecessors, I had only to seize upon the most sounding and euphonic surname that English history or topography affords, and elect it at once as the title of my work and the name of my hero. But, alas! what could my readers have expected from the chivalrous epithets of Howard, Mordaunt, Mortimer, or Stanley, or from the softer and more sentimental sounds of Belmour, Belville, Belfield, and Belgrave, but pages of inanity, similar to those which have been so christened for half a century past? I must modestly admit I am too diffident of my own merit to place it in unnecessary opposition to preconceived associations; I have, therefore, like a maiden knight with his white shield, assumed for my hero, WAVERLEY, an uncontaminated name, bearing with its sound little of good or evil, excepting what the reader shall hereafter be pleased to affix to it. But my second or supplemental title was a matter of much more difficult election, since that, short as it is, may be held as pledging the author to some special mode of laying his scene, drawing his characters, and managing his adventures. Had I, for example, announced in my frontispiece, ‘Waverley, a Tale of other Days,’ must not every novel-reader have anticipated a castle scarce less than that of Udolpho, of which the eastern wing had long been uninhabited, and the keys either lost, or consigned to the care of some aged butler or housekeeper, whose trembling steps, about the middle of the second volume, were doomed to guide the hero, or heroine, to the ruinous precincts? Would not the owl have shrieked and the cricket cried in my very title-page? and could it have been possible for me, with a moderate attention to decorum, to introduce any scene more lively than might be produced by the jocularity of a clownish but faithful valet, or the garrulous narrative of the heroine’s fille-de-chambre, when rehearsing the stories of blood and horror which she had heard in the servants’ hall? Again, had my title borne, ‘Waverley, a Romance from the German,’ what head so obtuse as not to image forth a profligate abbot, an oppressive duke, a secret and mysterious association of Rosycrucians and Illuminati, with all their properties of black cowls, caverns, daggers, electrical machines, trap-doors, and dark-lanterns? Or if I had rather chosen to call my work a ‘Sentimental Tale,’ would it not have been a sufficient presage of a heroine with a profusion of auburn hair, and a harp, the soft solace of her solitary hours, which she fortunately finds always the means of transporting from castle to cottage, although she herself be sometimes obliged to jump out of a two-pair-of-stairs window, and is more than once bewildered on her journey, alone and on foot, without any guide but a blowzy peasant girl, whose jargon she hardly can understand? Or, again, if my Waverley had been entitled ‘A Tale of the Times,’ wouldst thou not, gentle reader, have demanded from me a dashing sketch of the fashionable world, a few anecdotes of private scandal thinly veiled, and if lusciously painted, so much the better? a heroine from Grosvenor Square, and a hero from the Barouche Club or the Four-in-Hand, with a set of subordinate characters from the elegantes of Queen Anne Street East, or the dashing heroes of the Bow-Street Office? I could proceed in proving the importance of a title-page, and displaying at the same time my own intimate knowledge of the particular ingredients necessary to the composition of romances and novels of various descriptions;–but it is enough, and I scorn to tyrannise longer over the impatience of my reader, who is doubtless already anxious to know the choice made by an author so profoundly versed in the different branches of his art.