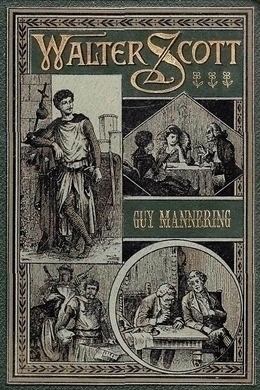 Guy Mannering is set in the exotic highlands of Scotland, this is an interesting novel by Walter Scott. Narrating the story of Harry and his adventures, this amazing work dwells on the ups and downs he faced throughout his life. As Mannering, the student of astrology, foresees this child’s future, everything appears to be in turmoil and mayhem. Engrossing!

It was in the beginning of the month of November 17–when a young English gentleman, who had just left the university of Oxford, made use of the liberty afforded him to visit some parts of the north of England; and curiosity extended his tour into the adjacent frontier of the sister country. He had visited, on the day that opens our history, some monastic ruins in the county of Dumfries, and spent much of the day in making drawings of them from different points, so that, on mounting his horse to resume his journey, the brief and gloomy twilight of the season had already commenced. His way lay through a wide tract of black moss, extending for miles on each side and before him. Little eminences arose like islands on its surface, bearing here and there patches of corn, which even at this season was green, and sometimes a hut or farm-house, shaded by a willow or two and surrounded by large elder-bushes. These insulated dwellings communicated with each other by winding passages through the moss, impassable by any but the natives themselves. The public road, however, was tolerably well made and safe, so that the prospect of being benighted brought with it no real danger. Still it is uncomfortable to travel alone and in the dark through an unknown country; and there are few ordinary occasions upon which Fancy frets herself so much as in a situation like that of Mannering.

As the light grew faint and more faint, and the morass appeared blacker and blacker, our traveller questioned more closely each chance passenger on his distance from the village of Kippletringan, where he proposed to quarter for the night. His queries were usually answered by a counter-challenge respecting the place from whence he came. While sufficient daylight remained to show the dress and appearance of a gentleman, these cross interrogatories were usually put in the form of a case supposed, as, ‘Ye’ll hae been at the auld abbey o’ Halycross, sir? there’s mony English gentlemen gang to see that.’–Or, ‘Your honour will become frae the house o’ Pouderloupat?’ But when the voice of the querist alone was distinguishable, the response usually was, ‘Where are ye coming frae at sic a time o’ night as the like o’ this?’–or, ‘Ye’ll no be o’ this country, freend?’ The answers, when obtained, were neither very reconcilable to each other nor accurate in the information which they afforded. Kippletringan was distant at first ‘a gey bit’; then the ‘gey bit’ was more accurately described as ‘ablins three mile’; then the ‘three mile’ diminished into ‘like a mile and a bittock’; then extended themselves into ‘four mile or thereawa’; and, lastly, a female voice, having hushed a wailing infant which the spokeswoman carried in her arms, assured Guy Mannering, ‘It was a weary lang gate yet to Kippletringan, and unco heavy road for foot passengers.’ The poor hack upon which Mannering was mounted was probably of opinion that it suited him as ill as the female respondent; for he began to flag very much, answered each application of the spur with a groan, and stumbled at every stone (and they were not few) which lay in his road.

Mannering now grew impatient. He was occasionally betrayed into a deceitful hope that the end of his journey was near by the apparition of a twinkling light or two; but, as he came up, he was disappointed to find that the gleams proceeded from some of those farm-houses which occasionally ornamented the surface of the extensive bog. At length, to complete his perplexity, he arrived at a place where the road divided into two. If there had been light to consult the relics of a finger-post which stood there, it would have been of little avail, as, according to the good custom of North Britain, the inscription had been defaced shortly after its erection. Our adventurer was therefore compelled, like a knight-errant of old, to trust to the sagacity of his horse, which, without any demur, chose the left-hand path, and seemed to proceed at a somewhat livelier pace than before, affording thereby a hope that he knew he was drawing near to his quarters for the evening. This hope, however, was not speedily accomplished, and Mannering, whose impatience made every furlong seem three, began to think that Kippletringan was actually retreating before him in proportion to his advance.