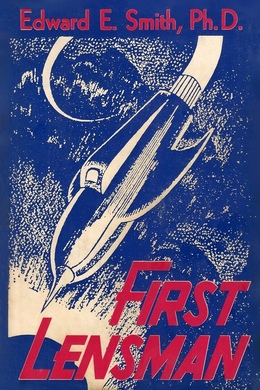 No human being had ever landed on the hidden planet of Arisia. A mysterious barrier, hanging unseen in space, turned back all ships. Then the word came to Earth, inexplicably but compellingly: GO TO ARISIA! Virgil Samms, founder of the Galactic Patrol, went - and came back with the Lens, the strange device that gave its wearer powers no man had ever possessed before. Samms knew that the price of this power would be high. But even he had no idea of the ultimate cost - nor of the strange destiny that awaited the First Lensman… First Lensman is the second self-contained novel in E. E. ‘Doc’ Smith’s epic Lensman series, one of the all-time classics of adventurous, galaxy-spanning science fiction.

The visitor, making his way unobserved through the crowded main laboratory of The Hill, stepped up to within six feet of the back of a big Norwegian seated at an electrono-optical bench. Drawing an automatic pistol, he shot the apparently unsuspecting scientist seven times, as fast as he could pull the trigger; twice through the brain, five times, closely spaced, through the spine.

“Ah, Gharlane of Eddore, I have been expecting you to look me up. Sit down.” Blonde, blue-eyed Dr. Nels Bergenholm, completely undisturbed by the passage of the stream of bullets through his head and body, turned and waved one huge hand at a stool beside his own.

“But those were not ordinary projectiles!” the visitor protested. Neither person–or rather, entity–was in the least surprised that no one else had paid any attention to what had happened, but it was clear that the one was taken aback by the failure of his murderous attack. “They should have volatilized that form of flesh–should at least have blown you back to Arisia, where you belong.”

“Ordinary or extraordinary, what matter? As you, in the guise of Gray Roger, told Conway Costigan a short time since, ‘I permitted that, as a demonstration of futility.’ Know, Gharlane, once and for all, that you will no longer be allowed to act directly against any adherent of Civilization, wherever situate. We of Arisia will not interfere in person with your proposed conquest of the two galaxies as you have planned it, since the stresses and conflicts involved are necessary–and, I may add, sufficient–to produce the Civilization which must and shall come into being. Therefore, neither will you, or any other Eddorian, so interfere. You will go back to Eddore and you will stay there.”

“Think you so?” Gharlane sneered. “You, who have been so afraid of us for over two thousand million Tellurian years that you dared not let us even learn of you? So afraid of us that you dared not take any action to avert the destruction of any one of your budding Civilizations upon any one of the worlds of either galaxy? So afraid that you dare not, even now, meet me mind to mind, but insist upon the use of this slow and unsatisfactory oral communication between us?”

“Either your thinking is loose, confused, and turbid, which I do not believe to be the case, or you are trying to lull me into believing that you are stupid.” Bergenholm’s voice was calm, unmoved. “I do not think that you will go back to Eddore; I know it. You, too, as soon as you have become informed upon certain matters, will know it. You protest against the use of spoken language because it is, as you know, the easiest, simplest, and surest way of preventing you from securing any iota of the knowledge for which you are so desperately searching. As to a meeting of our two minds, they met fully just before you, operating as Gray Roger, remembered that which your entire race forgot long ago. As a consequence of that meeting I so learned every line and vibration of your life pattern as to be able to greet you by your symbol, Gharlane of Eddore, whereas you know nothing of me save that I am an Arisian, a fact which has been obvious from the first.”

In an attempt to create a diversion, Gharlane released the zone of compulsion which he had been holding; but the Arisian took it over so smoothly that no human being within range was conscious of any change.

“It is true that for many cycles of time we concealed our existence from you,” Bergenholm went on without a break. “Since the reason for that concealment will still further confuse you, I will tell you what it was. Had you Eddorians learned of us sooner you might have been able to forge a weapon of power sufficient to prevent the accomplishment of an end which is now certain.

“It is true that your operations as Lo Sung of Uighar were not constrained. As Mithridates of Pontus–as Sulla, Marius, and Nero of Rome–as Hannibal of Carthage–as those self-effacing wights Alcixerxes of Greece and Menocoptes of Egypt–as Genghis Khan and Attila and the Kaiser and Mussolini and Hitler and the Tyrant of Asia–you were allowed to do as you pleased. Similar activities upon Rigel Four, Velantia, Palain Seven, and elsewhere were also allowed to proceed without effective opposition. With the appearance of Virgil Samms, however, the time arrived to put an end to your customary pernicious, obstructive, and destructive activities. I therefore interposed a barrier between you and those who would otherwise be completely defenseless against you.”

“But why now? Why not thousands of cycles ago? And why Virgil Samms?”