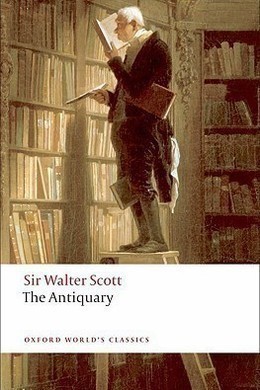 The Antiquary completes the series of books dealing with social manners of Scotland. Waverly embraced the age of our fathers. Guy Mannering that of our youth and Antiquary covers the last ten years of the 18th century. Set in the tense times of revolutionary France, a young man named Lovel who travels idly toward the Scottish seaside town of Fairport. He meets the antiquary Jonathan Oldbuck who hides from reality by studying miscellaneous history. The slow unraveling of Lovel’s identity will unearth the secrets and lies which have devastated the Earl of Glenallan. Will these discoveries reinstate the tottering fortunes of Sir Arthur Wardour and his daughter Isabella?

It was early on a fine summer’s day, near the end of the eighteenth century, when a young man, of genteel appearance, journeying towards the north-east of Scotland, provided himself with a ticket in one of those public carriages which travel between Edinburgh and the Queensferry, at which place, as the name implies, and as is well known to all my northern readers, there is a passage-boat for crossing the Firth of Forth. The coach was calculated to carry six regular passengers, besides such interlopers as the coachman could pick up by the way, and intrude upon those who were legally in possession. The tickets, which conferred right to a seat in this vehicle, of little ease, were dispensed by a sharp-looking old dame, with a pair of spectacles on a very thin nose, who inhabited a “laigh shop,” anglice, a cellar, opening to the High Street by a straight and steep stair, at the bottom of which she sold tape, thread, needles, skeins of worsted, coarse linen cloth, and such feminine gear, to those who had the courage and skill to descend to the profundity of her dwelling, without falling headlong themselves, or throwing down any of the numerous articles which, piled on each side of the descent, indicated the profession of the trader below.

The written hand-bill, which, pasted on a projecting board, announced that the Queensferry Diligence, or Hawes Fly, departed precisely at twelve o’clock on Tuesday, the fifteenth July 17–, in order to secure for travellers the opportunity of passing the Firth with the flood-tide, lied on the present occasion like a bulletin; for although that hour was pealed from Saint Giles’s steeple, and repeated by the Tron, no coach appeared upon the appointed stand. It is true, only two tickets had been taken out, and possibly the lady of the subterranean mansion might have an understanding with her Automedon, that, in such cases, a little space was to be allowed for the chance of filling up the vacant places–or the said Automedon might have been attending a funeral, and be delayed by the necessity of stripping his vehicle of its lugubrious trappings–or he might have staid to take a half-mutchkin extraordinary with his crony the hostler–or–in short, he did not make his appearance.

The young gentleman, who began to grow somewhat impatient, was now joined by a companion in this petty misery of human life–the person who had taken out the other place. He who is bent upon a journey is usually easily to be distinguished from his fellow-citizens. The boots, the great-coat, the umbrella, the little bundle in his hand, the hat pulled over his resolved brows, the determined importance of his pace, his brief answers to the salutations of lounging acquaintances, are all marks by which the experienced traveller in mail-coach or diligence can distinguish, at a distance, the companion of his future journey, as he pushes onward to the place of rendezvous. It is then that, with worldly wisdom, the first comer hastens to secure the best berth in the coach for himself, and to make the most convenient arrangement for his baggage before the arrival of his competitors. Our youth, who was gifted with little prudence, of any sort, and who was, moreover, by the absence of the coach, deprived of the power of availing himself of his priority of choice, amused himself, instead, by speculating upon the occupation and character of the personage who was now come to the coach office.