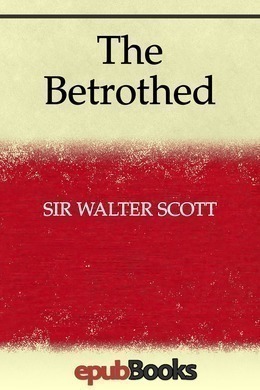 Set at the time of the Third Crusade (1189-92), The Betrothed is the first of Scott’s Tales of the Crusaders, and although set in the Welsh Marches it is a crusading novel in that it is about those who stayed at home. The betrothed is Eveline, daughter of a Norman warrior, who is a victim of the Crusade in that her intended husband is required by the Church to fulfil his vow to take the Cross. He departs for three years. The full horror of an arranged marriage, and of being a ‘prize’ as men seek to gain possession of her is vividly realised - the heroine is never free; her fate is always determined by the agency of men.

The Chronicles, from which this narrative is extracted, assure us, that during the long period when the Welsh princes maintained their independence, the year 1187 was peculiarly marked as favourable to peace betwixt them and their warlike neighbours, the Lords Marchers, who inhabited those formidable castles on the frontiers of the ancient British, on the ruins of which the traveller gazes with wonder. This was the time when Baldwin, Archbishop of Canterbury, accompanied by the learned Giraldus de Barri, afterwards Bishop of Saint David’s, preached the Crusade from castle to castle, from town to town; awakened the inmost valleys of his native Cambria with the call to arms for recovery of the Holy Sepulchre; and, while he deprecated the feuds and wars of Christian men against each other, held out to the martial spirit of the age a general object of ambition, and a scene of adventure, where the favour of Heaven, as well as earthy renown, was to reward the successful champions.

Yet the British chieftains, among the thousands whom this spirit- stirring summons called from their native land to a distant and perilous expedition, had perhaps the best excuse for declining the summons. The superior skill of the Anglo-Norman knights, who were engaged in constant inroads on the Welsh frontier, and who were frequently detaching from it large portions, which they fortified with castles, thus making good what they had won, was avenged, indeed, but not compensated, by the furious inroads of the British, who, like the billows of a retiring tide, rolled on successively, with noise, fury, and devastation; but, on each retreat, yielded ground insensibly to their invaders.

A union among the native princes might have opposed a strong and permanent barrier to the encroachments of the strangers; but they were, unhappily, as much at discord among themselves as they were with the Normans, and were constantly engaged in private war with each other, of which the common enemy had the sole advantage.

The invitation to the Crusade promised something at least of novelty to a nation peculiarly ardent in their temper; and it was accepted by many, regardless of the consequences which must ensue, to the country which they left defenceless. Even the most celebrated enemies of the Saxon and Norman race laid aside their enmity against the invaders of their country, to enrol themselves under the banners of the Crusade.

Amongst these was reckoned Gwenwyn, (or more properly Gwenwynwen, though we retain the briefer appellative,) a British prince who continued exercising a precarious sovereignty over such parts of Powys-Land as had not been subjugated by the Mortimers, Guarines, Latimers, FitzAlans, and other Norman nobles, who, under various pretexts, and sometimes contemning all other save the open avowal of superior force, had severed and appropriated large portions of that once extensive and independent principality, which, when Wales was unhappily divided into three parts on the death of Roderick Mawr, fell to the lot of his youngest son, Mervyn. The undaunted resolution and stubborn ferocity of Gwenwyn, descendant of that prince, had long made him beloved among the “Tall men” or Champions of Wales; and he was enabled, more by the number of those who served under him, attracted by his reputation, than by the natural strength of his dilapidated principality, to retaliate the encroachments of the English by the most wasteful inroads.

Yet even Gwenwyn on the present occasion seemed to forget his deeply sworn hatred against his dangerous neighbours. The Torch of Pengwern (for so Gwenwyn was called, from his frequently laying the province of Shrewsbury in conflagration) seemed at present to burn as calmly as a taper in the bower of a lady; and the Wolf of Plinlimmon, another name with which the bards had graced Gwenwyn, now slumbered as peacefully as the shepherd’s dog on the domestic hearth.