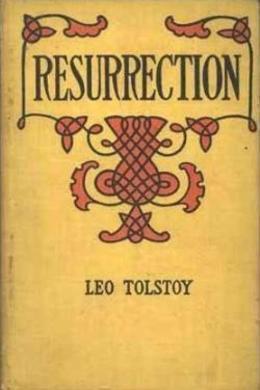 Resurrection is the last of Tolstoy’s major novels. It tells the story of a nobleman’s attempt to redeem the suffering his youthful philandering inflicted on a peasant girl who ends up a prisoner in Siberia. Tolstoy’s vision of redemption, achieved through loving forgiveness and his condemnation of violence, dominate the novel. An intimate, psychological tale of guilt, anger, and forgiveness, Resurrection is at the same time a panoramic description of social life in Russia at the end of the nineteenth century, reflecting its author’s outrage at the social injustices of the world in which he lived.

All the efforts of several hundred thousand people, crowded in a small space, to disfigure the land on which they lived; all the stone they covered it with to keep it barren; how so diligently every sprouting blade of grass was removed; all the smoke of coal and naphtha; all the cutting down of trees and driving off of cattle could not shut out the spring, even from the city. The sun was shedding its light; the grass, revivified, was blooming forth, where it was left uncut, not only on the greenswards of the boulevard, but between the flag-stones, and the birches, poplars and wild-berry trees were unfolding their viscous leaves; the limes were unfolding their buds; the daws, sparrows and pigeons were joyfully making their customary nests, and the flies were buzzing on the sun-warmed walls. Plants, birds, insects and children were equally joyful. Only men–grown-up men–continued cheating and tormenting themselves and each other. People saw nothing holy in this spring morning, in this beauty of God’s world–a gift to all living creatures–inclining to peace, good-will and love, but worshiped their own inventions for imposing their will on each other.

The joy of spring felt by animals and men did not penetrate the office of the county jail, but the one thing of supreme importance there was a document received the previous evening, with title, number and seal, which ordered the bringing into court for trial, this 28th day of April, at nine o’clock in the morning, three prisoners–two women and one man. One of the women, as the more dangerous criminal, was to be brought separately. So, in pursuance of that order, on the 28th day of April, at eight o’clock in the morning, the jail warden entered the dingy corridor of the woman’s ward. Immediately behind him came a woman with weary countenance and disheveled gray hair, wearing a crown-laced jacket, and girdled with a blue-edged sash. She was the matron.

“You want Maslova?” she asked the warden, as they neared one of the cells opening into the corridor.

The warden, with a loud clanking of iron, unlocked and opened the door of the cell, releasing an even fouler odor than permeated the corridor, and shouted:

“Maslova to the court!” and again closing the door he waited for her appearance.

The fresh, vivifying air of the fields, carried to the city by the wind, filled even the court-yard of the jail. But in the corridor the oppressive air, laden with the smell of tar and putrescence, saddened and dejected the spirit of every new-comer. The same feeling was experienced by the jail matron, notwithstanding she was accustomed to bad air. On entering the corridor she suddenly felt a weariness coming over her that inclined her to slumber.

There was a bustling in the cell; women’s voices and steps of bare feet were heard.

“Hurry up, Maslova! Come on, I say!” shouted the warden into the cell-door.

Presently at the cell-door appeared a middle-sized, full-breasted young woman, dressed in a long, gray coat over a white waist and skirt. She approached with firm step, and, facing about, stood before the warden. Over her linen stockings she wore jail shoes; her head was covered with a white ‘kerchief, from under which black curls were evidently purposely brushed over the forehead. The face of the woman was of that whiteness peculiar to people who have been a long time in confinement, and which reminds one of potato-sprouts in a cellar. Her small, wide hands, her white, full neck, showing from under the large collar of the coat, were of a similar hue. On the dull pallor of that face the most striking feature was the black, sparkling eyes, somewhat swollen, but very bright eyes, one of which slightly squinted. She held herself erect, putting forth her full chest. Emerging into the corridor, throwing her head back a little, she looked into the eyes of the warden and stood ready to do his bidding. The warden was about to shut the door, when a pale, severe, wrinkled face of an old woman with disheveled hair was thrust out. The old woman began to say something to Maslova. But the warden pressed the door against the head of the woman, and she disappeared. In the cell a woman’s voice burst into laughter. Maslova also smiled, and turned to the grated little opening in the door. The old woman pressed her forehead to the grating, and said in a hoarse voice:

“Above all, don’t speak too much; stick to one thing, and that is all.”

“Of course. It cannot be any worse,” said Maslova.

“You certainly cannot stick to two things,” said the chief warden, with official assurance of his own wit. “Follow me, now! Forward! March!”