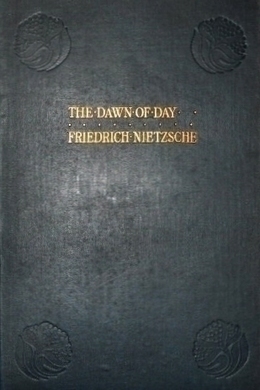 The Dawn of Day

When Nietzsche called his book The Dawn of Day, he was far from giving it a merely fanciful title to attract the attention of that large section of the public which judges books by their titles rather than by their contents. The Dawn of Day represents, figuratively, the dawn of Nietzsche’s own philosophy. Hitherto he had been considerably influenced in his outlook, if not in his actual thoughts, by Schopenhauer, Wagner, and perhaps also Comte. Human, all-too-Human, belongs to a period of transition. After his rupture with Bayreuth, Nietzsche is, in both parts of that work, trying to stand on his own legs, and to regain his spiritual freedom; he is feeling his way to his own philosophy.

The Dawn of Day, written in 1881 under the invigorating influence of a Genoese spring, is the dawn of this new Nietzsche. “With this book I open my campaign against morality,” he himself said later in his autobiography, the Ecce Homo. Just as in the case of the books written in his prime-The Joyful Wisdom, Zarathustra, Beyond Good and Evil, and The Genealogy of Morals-we cannot fail to be impressed in this work by Nietzsche’s deep psychological insight, the insight that showed him to be a powerful judge of men and things unequalled in the nineteenth or, perhaps, any other century.

SUBSEQUENT JUDGMENT.—All things that endure for a long time are little by little so greatly permeated by reason that their origin in unreason becomes improbable. Does not almost every exact statement of an origin strike us as paradoxical and sacrilegious? Indeed, does not the true historian constantly contradict?

PREJUDICE OF THE LEARNED.—Savants are quite correct in maintaining the proposition that men in all ages believed that they knew what was good and evil, praiseworthy and blamable. But it is a prejudice of the learned to say that we now know it better than any other age.

A TIME FOR EVERYTHING.—When man assigned a sex to all things, he did not believe that he was merely playing; but he thought, on the contrary, that he had acquired a profound insight:—it was only at a much later period, and then only partly, that he acknowledged the enormity of his error. In the same way, man has attributed a moral relationship to everything that exists, throwing the cloak of ethical significance over the world’s shoulders. One day all that will be of just as much value, and no more, as the amount of belief existing to-day in the masculinity or femininity of the sun.[FN^2]

AGAINST THE FANCIFUL DISHARMONY OF THE SPHERES.—We must once more sweep out of the world all this false grandeur, for it is contrary to the justice that all things about us may claim. And for this reason we must not see or wish the world to be more disharmonic than it is!

BE THANKFUL!—The most important result of the past efforts of humanity is that we need no longer go about in continual fear of wild beasts, barbarians, gods, and our own dreams.

THE JUGGLER AND HIS COUNTERPART.—That which is wonderful in science is contrary to that which is wonderful in the art of the juggler. For the latter would wish to make us believe that we see a very simple causality, where, in reality, an exceedingly complex causality is in operation. Science, on the other hand, forces us to give up our belief in the simple causality exactly where everything looks so easily comprehensible and we are merely the victims of appearances. The simplest things are _very _“complicated”—we can never be sufficiently astonished at them!

RECONCEIVING OUR FEELING OF SPACE.—Is it real or imaginary things which have built up the greater proportion of man’s happiness? It is certain, at all events, that the extent of the distance between the highest point of happiness and the lowest point of unhappiness has been established only with the help of imaginary things. As a consequence, this kind of a conception of space is always, under the influence of science, becoming smaller and smaller: in the same way as science has taught us, and is still teaching us, to look upon the earth as small—yea, to look upon the entire solar system as a mere point.

TRANSFIGURATION.—Perplexed sufferers, confused dreamers, the hysterically ecstatic—here we have the three classes into which Raphael divided mankind. We no longer consider the world in this light—and Raphael himself dare not do so: his own eyes would show him a new transfiguration.