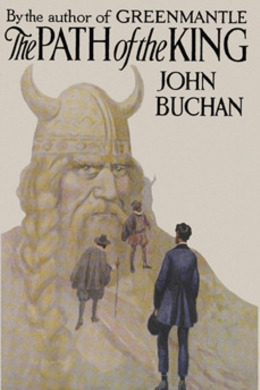 The Path of the King

Best known for penning the spy thriller The Thirty-Nine Steps, author and politician John Buchan produced dozens of fiction and non-fiction works over the course of his career. The Path of the King is a sprawling epic that takes the reader on a trip through the lives of centuries’ worth of kings and leaders, beginning in ancient times and ending with a surprising twist in nineteenth-century America. Fans of fast-paced historical fiction will love this inventive novel.

When Biorn was a very little boy in his father’s stead at Hightown he had a play of his own making for the long winter nights. At the back end of the hall, where the men sat at ale, was a chamber which the thralls used of a morning–a place which smelt of hams and meal and good provender. There a bed had been made for him when he forsook his cot in the women’s quarters. When the door was shut it was black dark, save for a thin crack of light from the wood fire and torches of the hall. The crack made on the earthen floor a line like a golden river. Biorn, cuddled up on a bench in his little bear-skin, was drawn like a moth to that stream of light. With his heart beating fast he would creep to it and stand for a moment with his small body bathed in the radiance. The game was not to come back at once, but to foray into the farther darkness before returning to the sanctuary of bed. That took all the fortitude in Biorn’s heart, and not till the thing was dared and done could he go happily to sleep.

One night Leif the Outborn watched him at his game. Sometimes the man was permitted to sleep there when he had been making sport for the housecarles.

“Behold an image of life!” he had said in his queer outland speech. “We pass from darkness to darkness with but an instant of light between. You are born for high deeds, princeling. Many would venture from the dark to the light, but it takes a stout breast to voyage into the farther dark.”

And Biorn’s small heart swelled, for he detected praise, though he did not know what Leif meant.

In the long winter the sun never topped Sunfell, and when the gales blew and the snow drifted there were lights in the hall the day long. In Biorn’s first recollection the winters were spent by his mother’s side, while she and her maids spun the wool of the last clipping. She was a fair woman out of the Western Isles, all brown and golden as it seemed to him, and her voice was softer than the hard ringing speech of the Wick folk. She told him island stories about gentle fairies and good-humoured elves who lived in a green windy country by summer seas, and her air would be wistful as if she thought of her lost home. And she sang him to sleep with crooning songs which had the sweetness of the west wind in them. But her maids were a rougher stock, and they stuck to the Wicking lullaby which ran something like this:

There was a second verse, but it was rude stuff, and the Queen had forbidden the maids to sing it.

As he grew older he was allowed to sit with the men in the hall, when bows were being stretched and bowstrings knotted and spear-hafts fitted. He would sit mum in a corner, listening with both ears to the talk of the old franklins, with their endless grumbles about lost cattle and ill neighbours. Better he liked the bragging of the young warriors, the Bearsarks, who were the spear-head in all the forays. At the great feasts of Yule-tide he was soon sent packing, for there were wild scenes when the ale flowed freely, though his father, King Ironbeard, ruled his hall with a strong hand. From the speech of his elders Biorn made his picture of the world beyond the firths. It was a world of gloom and terror, yet shot with a strange brightness. The High Gods might be met with in beggar’s guise at any ferry, jovial fellows and good friends to brave men, for they themselves had to fight for their lives, and the End of All Things hung over them like a cloud. Yet till the day of Ragnarok there would be feasting and fine fighting and goodly fellowship, and a stout heart must live for the hour.

Leif the Outborn was his chief friend. The man was no warrior, being lame of a leg and lean and sharp as a heron. No one knew his begetting, for he had been found as a child on the high fells. Some said he was come of the Finns, and his ill-wishers would have it that his birthplace had been behind a foss, and that he had the blood of dwarves in him. Yet though he made sport for the company, he had respect from them, for he was wise in many things, a skilled leech, a maker of runes, and a crafty builder of ships. He was a master hand at riddles, and for hours the housecarles would puzzle their wits over his efforts. This was the manner of them. “Who,” Leif would ask, “are the merry maids that glide above the land to the joy of their father; in winter they bear a white shield, but black in summer?” The answer was “Snowflakes and rain.” Or “I saw a corpse sitting on a corpse, a blind one riding on a lifeless steed?” to which the reply was “A dead horse on an ice-floe.” Biorn never guessed any of the riddles, but the cleverness of them he thought miraculous, and the others roared with glee at their own obtuseness.