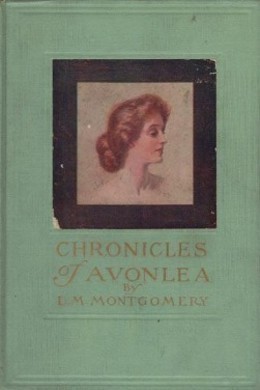 On Prince Edward Island, where Anne Shirley grew up in the sea-sprayed town of Avonlea, there was no shortage of wonderful stories. There was the case of Ludovic Speed, who wouldn’t propose to the woman he had courted for fifteen years until Anne devised a plan to “speed” him up…if it didn’t backfire and break his heart. But no one could blame mischievous Anne for the hilarious battle of the sexes that erupted when a man-hating woman and her cat got quarantined in the same house with a woman-hating bachelor and his dog. From sprawling Penhallow Grange, where a family waits nearly forever for two quarreling lovers to break their stubborn silence, to the tumbledown farm of Old Man Shaw, who awaits the retum of his beloved daughter, L. M. Montgomery has written twelve tales of secret hopes and hidden dreams, filled with enchantment and humor.

Anne Shirley was curled up on the window-seat of Theodora Dix’s sitting-room one Saturday evening, looking dreamily afar at some fair starland beyond the hills of sunset. Anne was visiting for a fortnight of her vacation at Echo Lodge, where Mr. and Mrs. Stephen Irving were spending the summer, and she often ran over to the old Dix homestead to chat for awhile with Theodora. They had had their chat out, on this particular evening, and Anne was giving herself over to the delight of building an air-castle. She leaned her shapely head, with its braided coronet of dark red hair, against the window-casing, and her gray eyes were like the moonlight gleam of shadowy pools.

Then she saw Ludovic Speed coming down the lane. He was yet far from the house, for the Dix lane was a long one, but Ludovic could be recognized as far as he could be seen. No one else in Middle Grafton had such a tall, gently-stooping, placidly-moving figure. In every kink and turn of it there was an individuality all Ludovic’s own.

Anne roused herself from her dreams, thinking it would only be tactful to take her departure. Ludovic was courting Theodora. Everyone in Grafton knew that, or, if anyone were in ignorance of the fact, it was not because he had not had time to find out. Ludovic had been coming down that lane to see Theodora, in the same ruminating, unhastening fashion, for fifteen years!

When Anne, who was slim and girlish and romantic, rose to go, Theodora, who was plump and middle-aged and practical, said, with a twinkle in her eye:

“There isn’t any hurry, child. Sit down and have your call out. You’ve seen Ludovic coming down the lane, and, I suppose, you think you’ll be a crowd. But you won’t. Ludovic rather likes a third person around, and so do I. It spurs up the conversation as it were. When a man has been coming to see you straight along, twice a week for fifteen years, you get rather talked out by spells.”

Theodora never pretended to bashfulness where Ludovic was concerned. She was not at all shy of referring to him and his dilatory courtship. Indeed, it seemed to amuse her.

Anne sat down again and together they watched Ludovic coming down the lane, gazing calmly about him at the lush clover fields and the blue loops of the river winding in and out of the misty valley below.

Anne looked at Theodora’s placid, finely-moulded face and tried to imagine what she herself would feel like if she were sitting there, waiting for an elderly lover who had, seemingly, taken so long to make up his mind. But even Anne’s imagination failed her for this.

“Anyway,” she thought, impatiently, “if I wanted him I think I’d find some way of hurrying him up. Ludovic SPEED! Was there ever such a misfit of a name? Such a name for such a man is a delusion and a snare.”

Presently Ludovic got to the house, but stood so long on the doorstep in a brown study, gazing into the tangled green boskage of the cherry orchard, that Theodora finally went and opened the door before he knocked. As she brought him into the sitting-room she made a comical grimace at Anne over his shoulder.

Ludovic smiled pleasantly at Anne. He liked her; she was the only young girl he knew, for he generally avoided young girls–they made him feel awkward and out of place. But Anne did not affect him in this fashion. She had a way of getting on with all sorts of people, and, although they had not known her very long, both Ludovic and Theodora looked upon her as an old friend.

Ludovic was tall and somewhat ungainly, but his unhesitating placidity gave him the appearance of a dignity that did not otherwise pertain to him. He had a drooping, silky, brown moustache, and a little curly tuft of imperial,–a fashion which was regarded as eccentric in Grafton, where men had clean-shaven chins or went full-bearded. His eyes were dreamy and pleasant, with a touch of melancholy in their blue depths.

He sat down in the big bulgy old armchair that had belonged to Theodora’s father. Ludovic always sat there, and Anne declared that the chair had come to look like him.

The conversation soon grew animated enough. Ludovic was a good talker when he had somebody to draw him out. He was well read, and frequently surprised Anne by his shrewd comments on men and matters out in the world, of which only the faint echoes reached Deland River. He had also a liking for religious arguments with Theodora, who did not care much for politics or the making of history, but was avid of doctrines, and read everything pertaining thereto. When the conversation drifted into an eddy of friendly wrangling between Ludovic and Theodora over Christian Science, Anne understood that her usefulness was ended for the time being, and that she would not be missed.