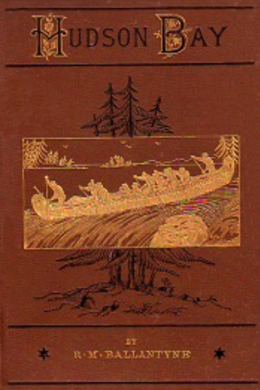 Everyday Life in the Wilds of North America

Aged just sixteen, the intrepid young Scotsman Robert M. Ballantyne joined the Hudson’s Bay Company. Posted immediately to North-Eastern Canada, he spent five years traversing the region’s inhospitable terrain by sleigh and canoe. His journal and letters home were so evocative that, upon his return, he was persuaded to publish an account of his experiences. Combining anthropological observations with descriptions of landscapes, plants, and animals, the account was applauded by the Dundee Courier for ‘opening up a mine of information to the curious’ and ‘describing the everyday life of a novel and singular existence’ with ‘buoyancy and animation’.

Reader,–I take for granted that you are tolerably well acquainted with the different modes of life and travelling peculiar to European nations. I also presume that you know something of the inhabitants of the East; and, it may be, a good deal of the Americans in general. But I suspect–at least I would fain hope–that you have only a vague and indefinite knowledge of life in those wild, uncivilised regions of the northern continent of America that surround the shores of Hudson Bay. I would fain hope this, I say, that I may have the satisfaction of giving you information on the subject, and of showing you that there is a body of civilised men who move, and breathe (pretty cool air, by the way!), and spend their lives in a quarter of the globe as totally different, in most respects, from the part you inhabit, as a beaver, roaming among the ponds and marshes of his native home, is from that sagacious animal when converted into a fashionable hat.

About the middle of May eighteen hundred and forty-one, I was thrown into a state of ecstatic joy by the arrival of a letter appointing me to the enviable situation of apprentice clerk in the service of the Honourable Hudson Bay Company. To describe the immense extent to which I expanded, both mentally and bodily, upon the receipt of this letter, is impossible; it is sufficient to know that from that moment I fancied myself a complete man of business, and treated my old companions with the condescending suavity of one who knows that he is talking to his inferiors.

A few days after, however, my pride was brought very low indeed, as I lay tossing about in my berth on the tumbling waves of the German Ocean, eschewing breakfast as a dangerous meal, and looking upon dinner with a species of horror utterly incomprehensible by those who have not experienced an attack of sea-sickness. Miseries of this description, fortunately, do not last long. In a couple of days we got into the comparatively still water of the Thames; and I, with a host of pale-faced young ladies and cadaverous-looking young gentlemen, emerged for the first time from the interior of the ship, to behold the beauties and wonders of the great metropolis, as we glided slowly up the crowded river.

Leave-taking is a disagreeable subject either to reflect upon or to write about, so we will skip that part of the business and proceed at once to Gravesend, where I stood (having parted from all my friends) on the deck of the good ship Prince Rupert, contemplating the boats and crowds of shipping that passed continually before me, and thinking how soon I was to leave the scenes to which I had been so long accustomed for a far-distant land. I was a boy, however; and this, I think, is equivalent to saying that I did not sorrow long. My future companion and fellow-clerk, Mr Wiseacre, was pacing the deck near me. This turned my thoughts into another channel, and set me speculating upon his probable temper, qualities, and age; whether or not he was strong enough to thrash me, and if we were likely to be good friends. The captain, too, was chatting and laughing with the doctor as carelessly as if he had not the great responsibility of taking a huge ship across a boundless waste of waters, and through fields and islands of ice, to a distant country some three thousand miles to the north-west of England. Thus encouraged, my spirits began to rise, and when the cry arose on deck that the steamer containing the committee of the Honourable Hudson Bay Company was in sight, I sprang up the companion-ladder in a state of mind, if not happy, at least as nearly so as under the circumstances could be expected.

Upon gaining the deck, I beheld a small steamboat passing close under our stern, filled with a number of elderly-looking gentlemen, who eyed us with a very critical expression of countenance. I had a pretty good guess who these gentlemen were; but had I been entirely ignorant, I should soon have been enlightened by the remark of a sailor, who whispered to his comrade, “I say, Bill, them’s the great guns!”

I suppose the fact of their being so had a sympathetic effect upon the guns of the Company’s three ships–the Prince Rupert, Prince Albert, and Prince of Wales–for they all three fired a salute of blank cartridge at the steamer as she passed them in succession. The steamer then ranged alongside of us, and the elderly gentlemen came on board and shook hands with the captain and officers, smiling blandly as they observed the neat, trim appearance of the three fine vessels, which, with everything in readiness for setting sail on the following morning, strained at their cables, as if anxious to commence their struggle with the waves.