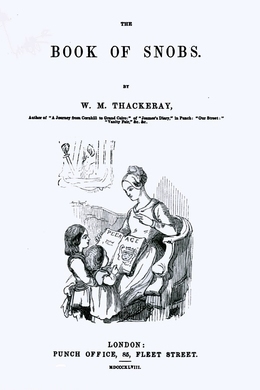 The Book of Snobs

A collection of satirical works on English society in the mid 19th century and attributed with coining the word snob in its current usage. This fascinating work is thoroughly recommended for anyone who is a fan of Thackeray or interested in the satire of the age. This humorous study begins with the assertion that ‘Snobs are to be studied like other objects of Natural Science’.

There are relative and positive Snobs. I mean by positive, such persons as are Snobs everywhere, in all companies, from morning till night, from youth to the grave, being by Nature endowed with Snobbishness–and others who are Snobs only in certain circumstances and relations of life.

For instance: I once knew a man who committed before me an act as atrocious as that which I have indicated in the last chapter as performed by me for the purpose of disgusting Colonel Snobley; viz, the using the fork in the guise of a toothpick. I once, I say, knew a man who, dining in my company at the ‘Europa Coffee-house,’ (opposite the Grand Opera, and, as everybody knows, the only decent place for dining at Naples,) ate peas with the assistance of his knife. He was a person with whose society I was greatly pleased at first–indeed, we had met in the crater of Mount Vesuvius, and were subsequently robbed and held to ransom by brigands in Calabria, which is nothing to the purpose–a man of great powers, excellent heart, and varied information; but I had never before seen him with a dish of pease, and his conduct in regard to them caused me the deepest pain.

After having seen him thus publicly comport himself, but one course was open to me–to cut his acquaintance. I commissioned a mutual friend (the Honourable Poly Anthus) to break the matter to this gentleman as delicately as possible, and to say that painful circumstances–in nowise affecting Mr. Marrowfat’s honour, or my esteem for him–had occurred, which obliged me to forego my intimacy with him; and accordingly we met and gave each other the cut direct that night at the Duchess of Monte Fiasco’s ball.

Everybody at Naples remarked the separation of the Damon and Pythias–indeed, Marrowfat had saved my life more than once–but, as an English gentleman, what was I to do?

My dear friend was, in this instance, the Snob RELATIVE. It is not snobbish of persons of rank of any other nation to employ their knife in the manner alluded to. I have seen Monte Fiasco clean his trencher with his knife, and every Principe in company doing likewise. I have seen, at the hospitable board of H.I.H. the Grand Duchess Stephanie of Baden–(who, if these humble lines should come under her Imperial eyes, is besought to remember graciously the most devoted of her servants)–I have seen, I say, the Hereditary Princess of Potztausend-Donnerwetter (that serenely-beautiful woman) use her knife in lieu of a fork or spoon; I have seen her almost swallow it, by Jove! like Ramo Samee, the Indian juggler. And did I blench? Did my estimation for the Princess diminish? No, lovely Amalia! One of the truest passions that ever was inspired by woman was raised in this bosom by that lady. Beautiful one! long, long may the knife carry food to those lips! the reddest and loveliest in the world!

The cause of my quarrel with Marrowfat I never breathed to mortal soul for four years. We met in the halls of the aristocracy–our friends and relatives. We jostled each other in the dance or at the board; but the estrangement continued, and seemed irrevocable, until the fourth of June, last year.

We met at Sir George Golloper’s. We were placed, he on the right, your humble servant on the left of the admirable Lady G.. Peas formed part of the banquet–ducks and green peas. I trembled as I saw Marrowfat helped, and turned away sickening, lest I should behold the weapon darting down his horrid jaws.

What was my astonishment, what my delight, when I saw him use his fork like any other Christian! He did not administer the cold steel once. Old times rushed back upon me–the remembrance of old services–his rescuing me from the brigands–his gallant conduct in the affair with the Countess Dei Spinachi–his lending me the 1,700L. I almost burst into tears with joy–my voice trembled with emotion. ‘George, my boy!’ I exclaimed, ‘George Marrowfat, my dear fellow! a glass of wine!’

Blushing–deeply moved–almost as tremulous as I was myself, George answered, ‘FRANK, SHALL IT BE HOCK OR MADEIRA? I could have hugged him to my heart but for the presence of the company. Little did Lady Golloper know what was the cause of the emotion which sent the duckling I was carving into her ladyship’s pink satin lap. The most good-natured of women pardoned the error, and the butler removed the bird.

We have been the closest friends over since, nor, of course, has George repeated his odious habit. He acquired it at a country school, where they cultivated peas and only used two-pronged forks, and it was only by living on the Continent where the usage of the four-prong is general, that he lost the horrible custom.