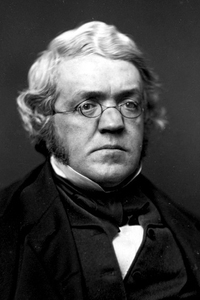 William Makepeace Thackeray was an English novelist of the 19th century. He was famous for his satirical works, particularly Vanity Fair, a panoramic portrait of English society. Thackeray began as a satirist and parodist, writing papers with a sneaking fondness for roguish upstarts like Becky Sharp in Vanity Fair and the title characters of The Luck of Barry Lyndon and Catherine. In his earliest works, writing under such pseudonyms as Charles James Yellowplush, Michael Angelo Titmarsh, and George Savage Fitz-Boodle, he tended towards the savage in his attacks on high society, military prowess, the institution of marriage, and hypocrisy. (source: Wikipedia)

Set in late 18th century Europe the adventures and mis-adventures of a minor member of the Irish gentry trying to better himself. Redmond Barry of Bally...read more »

A collection of satirical works on English society in the mid 19th century and attributed with coining the word snob in its current usage. This fascinat...read more »

A collection of several Christmas stories including Mrs Perkin’s Ball and The Rose and the Ring. Great reading over the festive holiday’s.

The Rose and The Ring is a satirical work of fiction that criticises, to some extent, the attitudes of the monarchy and those at the top of society and ...read more »

A sequel to Henry Esmond, the novel is set, as is much of its precursor, chiefly in colonial Virginia. The Virginians follows the life of the family and...read more »

No one is better equipped in the struggle for wealth and worldly success than the alluring and ruthless Becky Sharp, who defies her impoverished backgro...read more »