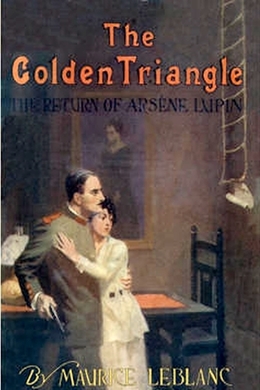 The Return of Arsène Lupin

Captain Patrice Belval falls in love with Little Mother Coralie, a nurse who attended to his war injuries, completely unaware of the past and the future involving them. His success at foiling an attempt to kidnap her only begins the dangerous events that follow and the unraveling of past secrets. But each new discovery they make brings them closer to an enemy’s plot to recreate a horrifying death scene 20 years after the original. To add to it, millions of francs’ worth of gold that were supposed to be transported outside the country remain as a mysterious treasure trove hidden where nobody would find it - nobody except Arsène Lupin, who arrives just in time to bring justice and reveal the mystery. Contents: Coralie; Right Hand And Left Leg; The Rusty Key; Before The Flames; Husband And Wife; Nineteen Minutes Past Seven; Twenty-three Minutes Past Twelve; Essarès Bey’s Work; Patrice And Coralie; The Red Cord; On The Brink; In The Abyss; The Nails In The Coffin; A Strange Character; The Belle Hélène; The Fourth Act; Siméon Gives Battle; Siméon’s Last Victim; Fiat Lux!

It was close upon half-past six and the evening shadows were growing denser when two soldiers reached the little space, planted with trees, opposite the Musée Galliéra, where the Rue de Chaillot and the Rue Pierre-Charron meet. One wore an infantryman’s sky-blue great-coat; the other, a Senegalese, those clothes of undyed wool, with baggy breeches and a belted jacket, in which the Zouaves and the native African troops have been dressed since the war. One of them had lost his right leg, the other his left arm.

They walked round the open space, in the center of which stands a fine group of Silenus figures, and stopped. The infantryman threw away his cigarette. The Senegalese picked it up, took a few quick puffs at it, put it out by squeezing it between his fore-finger and thumb and stuffed it into his pocket. All this without a word.

Almost at the same time two more soldiers came out of the Rue Galliéra. It would have been impossible to say to what branch they belonged, for their military attire was composed of the most incongruous civilian garments. However, one of them sported a Zouave’s chechia, the other an artilleryman’s képi. The first walked on crutches, the other on two sticks. These two kept near the newspaper-kiosk which stands at the edge of the pavement.

Three others came singly by the Rue Pierre-Charron, the Rue Brignoles and the Rue de Chaillot: a one-armed rifleman, a limping sapper and a marine with a hip that looked as if it was twisted. Each of them made straight for a tree and leant against it.

Not a word was uttered among them. None of the seven crippled soldiers seemed to know his companions or to trouble about or even perceive their presence. They stood behind their trees or behind the kiosk or behind the group of Silenus figures without stirring. And the few wayfarers who, on that evening of the 3rd of April, 1915, crossed this unfrequented square, which received hardly any light from the shrouded street-lamps, did not slacken pace to observe the men’s motionless outlines.

A clock struck half-past six. At that moment the door of one of the houses overlooking the square opened. A man came out, closed the door behind him, crossed the Rue de Chaillot and walked round the open space in front of the museum. It was an officer in khaki. Under his red forage-cap, with its three lines of gold braid, his head was wrapped in a wide linen bandage, which hid his forehead and neck. He was tall and very slenderly built. His right leg ended in a wooden stump with a rubber foot to it. He leant on a stick.

Leaving the square, he stepped into the roadway of the Rue Pierre-Charron. Here he turned and gave a leisurely look to his surroundings on every side. This minute inspection brought him to one of the trees facing the museum. With the tip of his cane he gently tapped a protruding stomach. The stomach pulled itself in.

The officer moved off again. This time he went definitely down the Rue Pierre-Charron towards the center of Paris. He thus came to the Avenue des Champs-Élysées, which he went up, taking the left pavement.

Two hundred yards further on was a large house, which had been transformed, as a flag proclaimed, into a hospital. The officer took up his position at some distance, so as not to be seen by those leaving, and waited.

It struck a quarter to seven and seven o’clock. A few more minutes passed. Five persons came out of the house, followed by two more. At last a lady appeared in the hall, a nurse wearing a wide blue cloak marked with the Red Cross.

“Here she comes,” said the officer.

She took the road by which he had arrived and turned down the Rue Pierre-Charron, keeping to the right-hand pavement and thus making for the space where the street meets the Rue de Chaillot. Her walk was light, her step easy and well-balanced. The wind, buffeting against her as she moved quickly on her way, swelled out the long blue veil floating around her shoulders. Notwithstanding the width of the cloak, the rhythmical swing of her body and the youthfulness of her figure were revealed. The officer kept behind her and walked along with an absent-minded air, twirling his stick, like a man taking an aimless stroll.

At this moment there was nobody in sight, in that part of the street, except him and her. But, just after she had crossed the Avenue Marceau and some time before he reached it, a motor standing in the avenue started driving in the same direction as the nurse, at a fixed distance from her.

It was a taxi-cab. And the officer noticed two things: first, that there were two men inside it and, next, that one of them leant out of the window almost the whole time, talking to the driver. He was able to catch a momentary glimpse of this man’s face, cut in half by a heavy mustache and surmounted by a gray felt hat.