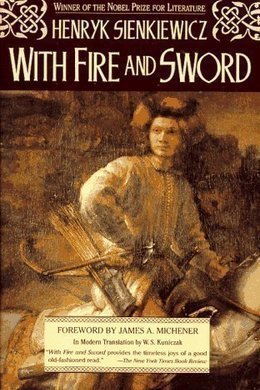 With Fire and Sword

An Historical Novel of Poland and Russia

This powerful novel, a “Polish Gone with the Wind”, is set in the 17th century and follows the struggle of the kingdom of Poland to maintain its unity in the face of the Cossack-led peasant rebellion. It was initially serialized in several Polish newspapers, chapters appearing in weekly instalments. It gained enormous popularity in Poland, and by the turn of the 20th century had become one of the most popular Polish books ever. It became obligatory reading in Polish schools, and has been translated into English and most European languages. With Fire and Sword is the first volume of a series known to Poles as the Trilogy, followed by The Deluge and Fire in the Steppe.

The year 1647 was that wonderful year in which manifold signs in the heavens and on the earth announced misfortunes of some kind and unusual events. Contemporary chroniclers relate that beginning with spring-time myriads of locusts swarmed from the Wilderness, destroying the grain and the grass; this was a forerunner of Tartar raids. In the summer there was a great eclipse of the sun, and soon after a comet appeared in the sky. In Warsaw a tomb was seen over the city, and a fiery cross in the clouds; fasts were held and alms given, for some men declared that a plague would come on the land and destroy the people. Finally, so mild a winter set in, that the oldest inhabitants could not remember the like of it. In the southern provinces ice did not confine the rivers, which, swollen by the daily melting of snows, left their courses and flooded the banks. Rainfalls were frequent. The steppe was drenched, and became an immense slough. The sun was so warm in the south that, wonder of wonders! in Bratslav and the Wilderness a green fleece covered the steppes and plains in the middle of December. The swarms in the beehives began to buzz and bustle; cattle were bellowing in the fields. Since such an order of things appeared altogether unnatural, all men in Russia who were waiting or looking for unusual events turned their excited minds and eyes especially to the Wilderness, from which rather than anywhere else danger might show itself.

At that time there was nothing unusual in the Wilderness,–no struggles there, nor encounters, beyond those of ordinary occurrence, and known only to the eagles, hawks, ravens, and beasts of the plain. For the Wilderness was of this character at that period. The last traces of settled life ended on the way to the south, at no great distance beyond Chigirin on the side of the Dnieper, and on the side of the Dniester not far from Uman; then forward to the bays and sea there was nothing but steppe after steppe, hemmed in by the two rivers as by a frame. At the bend of the Dnieper in the lower country beyond the Cataracts Cossack life was seething, but in the open plains no man dwelt; only along the shores were nestled here and there little fields, like islands in the sea. The land belonged in name to Poland, but it was an empty land, in which the Commonwealth permitted the Tartars to graze their herds; but since the Cossacks prevented this frequently, the field of pasture was a field of battle too.

How many struggles were fought in that region, how many people had laid down their lives there, no man had counted, no man remembered. Eagles, falcons, and ravens alone saw these; and whoever from a distance heard the sound of wings and the call of ravens, whoever beheld the whirl of birds circling over one place, knew that corpses or unburied bones were lying beneath. Men were hunted in the grass as wolves or wild goats. All who wished, engaged in this hunt. Fugitives from the law defended themselves in the wild steppes. The armed herdsman guarded his flock, the warrior sought adventure, the robber plunder, the Cossack a Tartar, the Tartar a Cossack. It happened that whole bands guarded herds from troops of robbers. The steppe was both empty and filled, quiet and terrible, peaceable and full of ambushes; wild by reason of its wild plains, but wild, too, from the wild spirit of men.

At times a great war filled it. Then there flowed over it like waves Tartar chambuls, Cossack regiments, Polish or Wallachian companies. In the night-time the neighing of horses answered the howling of wolves, the voices of drums and brazen trumpets flew on to the island of Ovid and the sea, and along the black trail of Kutchman there seemed an inundation of men. The boundaries of the Commonwealth were guarded from Kamenyets to the Dnieper by outposts and stanitsas; and when the roads were about to swarm with people, it was known especially by the countless flocks of birds which, frightened by the Tartars, flew onward to the north. But the Tartar, if he slipped out from the Black Forest or crossed the Dniester from the Wallachian side, came by the southern provinces together with the birds.