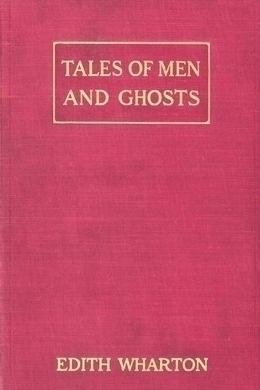 Tales of Men and Ghosts

Tales of Men and Ghosts consists of ten short stories by Pulitzer Prize-winning American novelist Edith Wharton. Previously been printed in Scribner’s Magazine and Century Magazine before being collected together in this volume. They are listed here in chronological order of their original publication dates:

Hubert Granice, pacing the length of his pleasant lamp-lit library, paused to compare his watch with the clock on the chimney-piece.

In exactly three minutes Mr. Peter Ascham, of the eminent legal firm of Ascham and Pettilow, would have his punctual hand on the door-bell of the flat. It was a comfort to reflect that Ascham was so punctual–the suspense was beginning to make his host nervous. And the sound of the door-bell would be the beginning of the end–after that there’d be no going back, by God–no going back!

Granice resumed his pacing. Each time he reached the end of the room opposite the door he caught his reflection in the Florentine mirror above the fine old walnut credence he had picked up at Dijon–saw himself spare, quick-moving, carefully brushed and dressed, but furrowed, gray about the temples, with a stoop which he corrected by a spasmodic straightening of the shoulders whenever a glass confronted him: a tired middle-aged man, baffled, beaten, worn out.

As he summed himself up thus for the third or fourth time the door opened and he turned with a thrill of relief to greet his guest. But it was only the man-servant who entered, advancing silently over the mossy surface of the old Turkey rug.

Granice made a curt gesture of annoyance. It was becoming harder and harder for him to control these reflexes. He turned on his heel, tossing to the servant over his shoulder: “Very good. Put off dinner.”

Down his spine he felt the man’s injured stare. Mr. Granice had always been so mild-spoken to his people–no doubt the odd change in his manner had already been noticed and discussed below stairs. And very likely they suspected the cause. He stood drumming on the writing-table till he heard the servant go out; then he threw himself into a chair, propping his elbows on the table and resting his chin on his locked hands.

Another half hour alone with it!

He wondered irritably what could have detained his guest. Some professional matter, no doubt–the punctilious lawyer would have allowed nothing less to interfere with a dinner engagement, more especially since Granice, in his note, had said: “I shall want a little business chat afterward.”

But what professional matter could have come up at that unprofessional hour? Perhaps some other soul in misery had called on the lawyer; and, after all, Granice’s note had given no hint of his own need! No doubt Ascham thought he merely wanted to make another change in his will. Since he had come into his little property, ten years earlier, Granice had been perpetually tinkering with his will.

Suddenly another thought pulled him up, sending a flush to his sallow temples. He remembered a word he had tossed to the lawyer some six weeks earlier, at the Century Club. “Yes–my play’s as good as taken. I shall be calling on you soon to go over the contract. Those theatrical chaps are so slippery–I won’t trust anybody but you to tie the knot for me!” That, of course, was what Ascham would think he was wanted for. Granice, at the idea, broke into an audible laugh–a queer stage-laugh, like the cackle of a baffled villain in a melodrama. The absurdity, the unnaturalness of the sound abashed him, and he compressed his lips angrily. Would he take to soliloquy next?

He lowered his arms and pulled open the upper drawer of the writing-table. In the right-hand corner lay a thick manuscript, bound in paper folders, and tied with a string beneath which a letter had been slipped. Next to the manuscript was a small revolver. Granice stared a moment at these oddly associated objects; then he took the letter from under the string and slowly began to open it. He had known he should do so from the moment his hand touched the drawer. Whenever his eye fell on that letter some relentless force compelled him to re-read it.