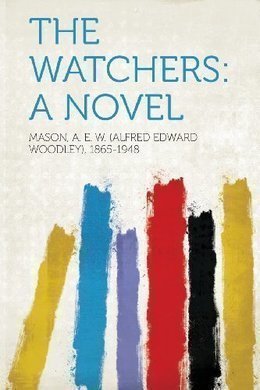 The Watchers is a novel by A. E. W. Mason (author of At the Villa Rose, The Prisoner in the Opal, etc.), first published in 1899 by the Frederick A. Stokes Company.

I had never need to keep any record either of the date or place. It was the fifteenth night of July, in the year 1758, and the place was Lieutenant Clutterbuck’s lodging at the south corner of Burleigh Street, Strand. The night was tropical in its heat, and though every window stood open to the Thames, there was not a man, I think, who did not long for the cool relief of morning, or step out from time to time on to the balcony and search the dark profundity of sky for the first flecks of grey. I cannot be positive about the entire disposition of the room: but certainly Lieutenant Clutterbuck was playing at ninepins down the middle with half a dozen decanters and a couple of silver salvers; and Mr. Macfarlane, a young gentleman of a Scottish regiment, was practising a game of his own.

He carried the fire-irons and Lieutenant Clutterbuck’s sword under his arm, and walked solidly about the floor after a little paper ball rolled up out of a news sheet, which he hit with one of these instruments, selecting now the poker, now the tongs or the sword with great deliberation, and explaining his selection with even greater earnestness; there was besides a great deal of noise, which seemed to be a quality of the room rather than the utterance of any particular person; and I have a clear recollection that everything, from the candles to the glasses on the tables and the broken tobacco pipes on the floor, was of a dazzling and intolerable brightness. This brightness distressed me particularly, because just opposite to where I sat a large mirror hung upon the wall between two windows. On each side was a velvet hollow of gloom, in the middle this glittering oval. Every ray of light within the room seemed to converge upon its surface. I could not but look at it–for it did not occur to me to move away to another chair–and it annoyed me exceedingly. Besides, the mirror was inclined forward from the wall, and so threw straight down at me a reflection of Lieutenant Clutterbuck’s guests, as they flung about the room beneath it.

Thus I saw a throng of flushed young exuberant faces, and in the background, continually peeping between them, my own, very white and drawn and thin and a million years old. That, too, annoyed me very much, and then by a sheer miracle, as it seemed to me, the mirror splintered and cracked and dropped in fragments on to the floor, until there was only hanging on the wall the upper rim, a thin curve of glass like a bright sickle. I remember that the noise and hurley-burley suddenly ceased, as though morning had come unawares upon a witches’ carnival and that all the men present stood like statues and appeared to stare at me. Lieutenant Clutterbuck broke the silence, or rather tore it, with a great loud laugh which crumpled up his face. He said something about “Old Steve Berkeley,” and smacked his hand upon my shoulder, and shouted for another glass, which he filled and placed at my elbow, for my own had disappeared.

I had no time to drink from it, however, for just as I was raising it to my lips Mr. Macfarlane’s paper ball dropped from the ceiling into the liquor.

“Bunkered, by God!” cried Mr. Macfarlane, amidst a shout of laughter.

I looked at Macfarlane with some reserve.

“I don’t understand,” I began.

“Don’t move, man!” cried he, as he forced me back into my chair, and dropping the fire-irons with a clatter on to the floor, he tried to scoop the ball out of the glass with the point of Clutterbuck’s sword-sheath. He missed the glass; the sheath caught me full on the knuckles; I opened my hand and—-

“Sir, you have ruined my game,” said Mr. Macfarlane, with considerable heat.

“And a good thing too,” said I, “for a sillier game I never saw in all my life.”

“Gentlemen,” cried Lieutenant Clutterbuck, though he did not articulate the word with his customary precision; but his intentions were undoubtedly pacific. He happened to be holding the last of his decanters in his hand, and he swung it to and fro. “Gentlemen,” he repeated, and as if to keep me company, he let the decanter slip out of his hand. It fell on the floor and split with a loud noise. “Well,” said he, solemnly, “I have dropped a brooch,” and he fumbled at his cravat.

Another peal of laughter went up; and while it was still ringing, a man–what his name was I cannot remember, even if I ever knew it; I saw him for the first time that evening, and I have only once seen him since, but he was certainly–more sober than the rest–stooped over my chair and caught me by the arm.