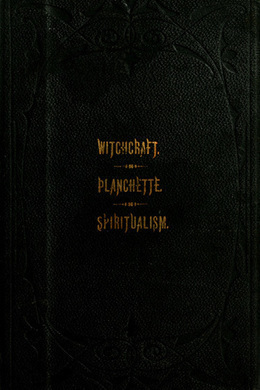 This book published in 1886 in New York, is a collection, containing the following individual essays: The Salem Witchcraft, A History Of Salem Witchcraft, The Planchette Mystery, Modern Spiritualism, Dr. Doddridge’s Dream. The object in reprinting this most interesting review is simply to show the progress made in moral, intellectual, and physical science. The reader will go back with us to a time—not very remote—when nothing was known of Phrenology and Psychology; when men and women were persecuted, and even put to death, through the baldest ignorance and the most pitiable superstition. If we were to go back still farther, to the Holy Wars, we should find cities and nations drenched in human blood through religious bigotry and intolerance. Let us thank God that our lot is cast in a more fortunate age, when the light of revelation, rightly interpreted by the aid of Science, points to the Source of all knowledge, all truth, all light.

The name of the village of Salem is as familiar to Americans as that of any provincial town in England or France is to Englishmen and Frenchmen; yet, when uttered in the hearing of Europeans, it carries us back two or three centuries, and suggests an image, however faint and transient, of the life of the Pilgrim Fathers, who gave that sacred name to the place of their chosen habitation. If we were on the spot to-day, we should see a modern American seaport, with an interest of its own, but by no means a romantic one. At present Salem is suffering its share of the adversity which has fallen upon the shipping trade, while it is still mourning the loss of some of its noblest citizens in the late civil war. No community in the Republic paid its tribute of patriotic sacrifice more generously; and there were doubtless occasions when its citizens remembered the early days of glory, when their fathers helped to chase the retreating British, on the first shedding of blood in the war of Independence. But now they have enough to think of under the pressure of the hour. Their trade is paralyzed under the operation of the tariff; their shipping is rotting in port, except so much of it as is sold to foreigners; there is much poverty in low places and dread of further commercial adversity among the chief citizens, but there is the same vigorous pursuit of intellectual interests and pleasures, throughout the society of the place, that there always is wherever any number of New Englanders have made their homes beside the church, the library, and the school. Whatever other changes may occur from one age or period to another, the features of natural scenery are, for the most part, unalterable. Massachusetts Bay is as it was when the Pilgrims cast their first look over it: its blue waters–as blue as the seas of Greece–rippling up upon the sheeted snow of the sands in winter, or beating against rocks glittering in ice; in autumn the pearly waves flowing in under the thickets of gaudy foliage; and on summer evening the green surface surrounding the amethyst islands, where white foam spouts out of the caves and crevices. On land, there are still the craggy hills, and the jutting promontories of granite, where the barberry grows as the bramble does with us, and room is found for the farmstead between the crags, and for the apple-trees and little slopes of grass, and patches of tillage, where all else looks barren. The boats are out, or ranged on shore, according to the weather, just as they were from the beginning, only in larger numbers; and far away on either hand the coasts and islands, the rocks and hills and rural dwellings, are as of old, save for the shrinking of the forest, and the growth of the cities and villages, whose spires and school-houses are visible here and there.

Yet there are changes, marked and memorable, both in Salem and its neighborhood, since the date of thirty-seven years ago. There was then an exclusiveness about the place as evident to strangers, and as dear to natives, as the rivalship between Philadelphia and Baltimore, while far more interesting and honorable in its character. In Salem society there was a singular combination of the precision and scrupulousness of Puritan manners and habits of thought with the pride of a cultivated and traveled community, boasting acquaintance with people of all known faiths, and familiarity with all known ways of living and thinking, while adhering to the customs, and even the prejudices, of their fathers. While relating theological conversations held with liberal Buddhists or lax Mohammedans, your host would whip his horse, to get home at full speed by sunset on a Saturday, that the groom’s Sabbath might not be encroached on for five minutes. The houses were hung with odd Chinese copies of English engravings, and furnished with a variety of pretty and useful articles from China, never seen elsewhere, because none but American traders had then achieved any commerce with that country but in tea, nankeen, and silk. The Salem Museum was the glory of the town, and even of the State. Each speculative merchant who went forth, with or without a cargo (and the trade in ice was then only beginning), in his own ship, with his wife and her babes, was determined to bring home some offering to the Museum, if he should accomplish a membership of that institution by doubling either Cape Horn or the Cape of Good Hope. He picked up an old cargo somewhere and trafficked with it for another; and so he went on–if not rounding the world, seeing no small part of it, and making acquaintance with a dozen eccentric potentates and barbaric chiefs, and sovereigns with widely celebrated names; and, whether the adventurer came home rich or poor, he was sure to have gained much knowledge, and to have become very entertaining in discourse.