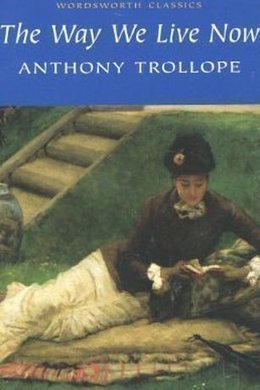 The Way We Live Now

The Way We Live Now — regarded by many as Anthony Trollope’s greatest novel — encompasses in its broad scope much of the business, political, social, and literary life of 1870s London. At its centre is the larger-than-life figure of Augustus Melmotte, a financier of uncertain background who rises to great heights over a financial speculation scheme involving plans for a railway in America. “I was instigated by what I conceived to be the commercial profligacy of the age,” Trollope wrote of this novel, and the work remains one of the world’s most ambitious fictionalized critiques of capitalism. It also provides unique insight into the operation of the late-Victorian literary world, into the dynamics of anti-Semitism in the Victorian period, and into a number of other subjects of continuing interest. More than that, it remains among the most readable of Trollope’s many novels.

Let the reader be introduced to Lady Carbury, upon whose character and doings much will depend of whatever interest these pages may have, as she sits at her writing-table in her own room in her own house in Welbeck Street. Lady Carbury spent many hours at her desk, and wrote many letters,–wrote also very much beside letters. She spoke of herself in these days as a woman devoted to Literature, always spelling the word with a big L. Something of the nature of her devotion may be learned by the perusal of three letters which on this morning she had written with a quickly running hand. Lady Carbury was rapid in everything, and in nothing more rapid than in the writing of letters. Here is Letter No. 1;–

I have taken care that you shall have the early sheets of my two new volumes to-morrow, or Saturday at latest, so that you may, if so minded, give a poor struggler like myself a lift in your next week’s paper. Do give a poor struggler a lift. You and I have so much in common, and I have ventured to flatter myself that we are really friends! I do not flatter you when I say, that not only would aid from you help me more than from any other quarter, but also that praise from you would gratify my vanity more than any other praise. I almost think you will like my “Criminal Queens.” The sketch of Semiramis is at any rate spirited, though I had to twist it about a little to bring her in guilty. Cleopatra, of course, I have taken from Shakespeare. What a wench she was! I could not quite make Julia a queen; but it was impossible to pass over so piquant a character. You will recognise in the two or three ladies of the empire how faithfully I have studied my Gibbon. Poor dear old Belisarius! I have done the best I could with Joanna, but I could not bring myself to care for her. In our days she would simply have gone to Broadmore. I hope you will not think that I have been too strong in my delineations of Henry VIII. and his sinful but unfortunate Howard. I don’t care a bit about Anne Boleyne. I am afraid that I have been tempted into too great length about the Italian Catherine; but in truth she has been my favourite. What a woman! What a devil! Pity that a second Dante could not have constructed for her a special hell. How one traces the effect of her training in the life of our Scotch Mary. I trust you will go with me in my view as to the Queen of Scots. Guilty! guilty always! Adultery, murder, treason, and all the rest of it. But recommended to mercy because she was royal. A queen bred, born and married, and with such other queens around her, how could she have escaped to be guilty? Marie Antoinette I have not quite acquitted. It would be uninteresting;–perhaps untrue. I have accused her lovingly, and have kissed when I scourged. I trust the British public will not be angry because I do not whitewash Caroline, especially as I go along with them altogether in abusing her husband.

But I must not take up your time by sending you another book, though it gratifies me to think that I am writing what none but yourself will read. Do it yourself, like a dear man, and, as you are great, be merciful. Or rather, as you are a friend, be loving.

Yours gratefully and faithfully,