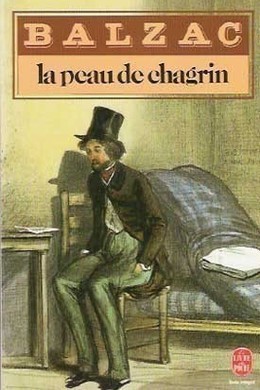 Or, The Wild Ass's Skin

The Magic Skin (La Peau de chagrin) is set in early 19th-century Paris and tells the story of a young man who finds a magic piece of shagreen that fulfills his every desire. For each wish granted, however, the skin shrinks and consumes a portion of his physical energy. Although the novel uses fantastic elements, its main focus is a realistic portrayal of the excesses of bourgeois materialism. Balzac’s renowned attention to detail is used to describe a gambling house, an antique shop, a royal banquet, and other locales. He also includes details from his own life as a struggling writer, placing the main character in a home similar to the one he occupied at the start of his literary career. The central theme of La Peau de chagrin is the conflict between desire and longevity. The magic skin represents the owner’s life-force, which is depleted through every expression of will, especially when it is employed for the acquisition of power. Ignoring a caution from the shopkeeper who offers him the skin, the protagonist greedily surrounds himself with wealth, only to find himself miserable and decrepit at the story’s end. (source: Wikipedia)

Towards the end of the month of October 1829 a young man entered the Palais-Royal just as the gaming-houses opened, agreeably to the law which protects a passion by its very nature easily excisable. He mounted the staircase of one of the gambling hells distinguished by the number 36, without too much deliberation.

“Your hat, sir, if you please?” a thin, querulous voice called out. A little old man, crouching in the darkness behind a railing, suddenly rose and exhibited his features, carved after a mean design.

As you enter a gaming-house the law despoils you of your hat at the outset. Is it by way of a parable, a divine revelation? Or by exacting some pledge or other, is not an infernal compact implied? Is it done to compel you to preserve a respectful demeanor towards those who are about to gain money of you? Or must the detective, who squats in our social sewers, know the name of your hatter, or your own, if you happen to have written it on the lining inside? Or, after all, is the measurement of your skull required for the compilation of statistics as to the cerebral capacity of gamblers? The executive is absolutely silent on this point. But be sure of this, that though you have scarcely taken a step towards the tables, your hat no more belongs to you now than you belong to yourself. Play possesses you, your fortune, your cap, your cane, your cloak.

As you go out, it will be made clear to you, by a savage irony, that Play has yet spared you something, since your property is returned. For all that, if you bring a new hat with you, you will have to pay for the knowledge that a special costume is needed for a gambler.

The evident astonishment with which the young man took a numbered tally in exchange for his hat, which was fortunately somewhat rubbed at the brim, showed clearly enough that his mind was yet untainted; and the little old man, who had wallowed from his youth up in the furious pleasures of a gambler’s life, cast a dull, indifferent glance over him, in which a philosopher might have seen wretchedness lying in the hospital, the vagrant lives of ruined folk, inquests on numberless suicides, life-long penal servitude and transportations to Guazacoalco.

His pallid, lengthy visage appeared like a haggard embodiment of the passion reduced to its simplest terms. There were traces of past anguish in its wrinkles. He supported life on the glutinous soups at Darcet’s, and gambled away his meagre earnings day by day. Like some old hackney which takes no heed of the strokes of the whip, nothing could move him now. The stifled groans of ruined players, as they passed out, their mute imprecations, their stupefied faces, found him impassive. He was the spirit of Play incarnate. If the young man had noticed this sorry Cerberus, perhaps he would have said, “There is only a pack of cards in that heart of his.”

The stranger did not heed this warning writ in flesh and blood, put here, no doubt, by Providence, who has set loathing on the threshold of all evil haunts. He walked boldly into the saloon, where the rattle of coin brought his senses under the dazzling spell of an agony of greed. Most likely he had been drawn thither by that most convincing of Jean Jacques’ eloquent periods, which expresses, I think, this melancholy thought, “Yes, I can imagine that a man may take to gambling when he sees only his last shilling between him and death.”

There is an illusion about a gambling saloon at night as vulgar as that of a bloodthirsty drama, and just as effective. The rooms are filled with players and onlookers, with poverty-stricken age, which drags itself thither in search of stimulation, with excited faces, and revels that began in wine, to end shortly in the Seine. The passion is there in full measure, but the great number of the actors prevents you from seeing the gambling-demon face to face. The evening is a harmony or chorus in which all take part, to which each instrument in the orchestra contributes his share. You would see there plenty of respectable people who have come in search of diversion, for which they pay as they pay for the pleasures of the theatre, or of gluttony, or they come hither as to some garret where they cheapen poignant regrets for three months to come.