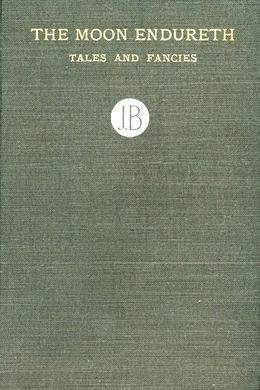 Dealing mainly with the mysterious and the inexplicable, these stories lead the reader through the weird, uncharted borderland swayed by the psychic supernatural or invisible powers. Mystery, romance, and adventure abound in them. Contrasting with tales of this type are realistic tales of both the past and the present. Both kinds of stories will appeal to those of discriminating literary taste. Many of these stories on their first appearance in the magazines were hailed as works of rare originality and imaginative power. One critic going so far as to say that the story entitled, “The Lemnian” is the best short story in the English Language.

I came down from the mountain and into the pleasing valley of the Adige in as pelting a heat as ever mortal suffered under. The way underfoot was parched and white; I had newly come out of a wilderness of white limestone crags, and a sun of Italy blazed blindingly in an azure Italian sky. You are to suppose, my dear aunt, that I had had enough and something more of my craze for foot-marching. A fortnight ago I had gone to Belluno in a post-chaise, dismissed my fellow to carry my baggage by way of Verona, and with no more than a valise on my back plunged into the fastnesses of those mountains. I had a fancy to see the little sculptured hills which made backgrounds for Gianbellini, and there were rumours of great mountains built wholly of marble which shone like the battlements.

…1 This extract from the unpublished papers of the Manorwater family has seemed to the Editor worth printing for its historical interest. The famous Lady Molly Carteron became Countess of Manorwater by her second marriage. She was a wit and a friend of wits, and her nephew, the Honourable Charles Hervey-Townshend (afterwards our Ambassador at The Hague), addressed to her a series of amusing letters while making, after the fashion of his contemporaries, the Grand Tour of Europe. Three letters, written at various places in the Eastern Alps and despatched from Venice, contain the following short narrative….

of the Celestial City. So at any rate reported young Mr. Wyndham, who had travelled with me from Milan to Venice. I lay the first night at Pieve, where Titian had the fortune to be born, and the landlord at the inn displayed a set of villainous daubs which he swore were the early works of that master. Thence up a toilsome valley I journeyed to the Ampezzan country, valley where indeed I saw my white mountains, but, alas! no longer Celestial. For it rained like Westmorland for five endless days, while I kicked my heels in an inn and turned a canto of Aristo into halting English couplets. By-and-by it cleared, and I headed westward towards Bozen, among the tangle of rocks where the Dwarf King had once his rose-garden. The first night I had no inn but slept in the vile cabin of a forester, who spoke a tongue half Latin, half Dutch, which I failed to master. The next day was a blaze of heat, the mountain-paths lay thick with dust, and I had no wine from sunrise to sunset. Can you wonder that, when the following noon I saw Santa Chiara sleeping in its green circlet of meadows, my thought was only of a deep draught and a cool chamber? I protest that I am a great lover of natural beauty, of rock and cascade, and all the properties of the poet: but the enthusiasm of Rousseau himself would sink from the stars to earth if he had marched since breakfast in a cloud of dust with a throat like the nether millstone.

Yet I had not entered the place before Romance revived. The little town–a mere wayside halting-place on the great mountain-road to the North–had the air of mystery which foretells adventure. Why is it that a dwelling or a countenance catches the fancy with the promise of some strange destiny? I have houses in my mind which I know will some day and somehow be intertwined oddly with my life; and I have faces in memory of which I know nothing–save that I shall undoubtedly cast eyes again upon them. My first glimpses of Santa Chiara gave me this earnest of romance. It was walled and fortified, the streets were narrow pits of shade, old tenements with bent fronts swayed to meet each other. Melons lay drying on flat roofs, and yet now and then would come a high-pitched northern gable. Latin and Teuton met and mingled in the place, and, as Mr. Gibbon has taught us, the offspring of this admixture is something fantastic and unpredictable. I forgot my grievous thirst and my tired feet in admiration and a certain vague expectation of wonders. Here, ran my thought, it is fated, maybe, that romance and I shall at last compass a meeting. Perchance some princess is in need of my arm, or some affair of high policy is afoot in this jumble of old masonry. You will laugh at my folly, but I had an excuse for it. A fortnight in strange mountains disposes a man to look for something at his next encounter with his kind, and the sight of Santa Chiara would have fired the imagination of a judge in Chancery.