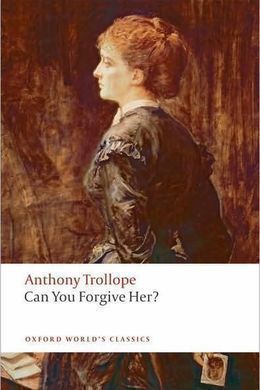 Can You Forgive Her?

With ‘Can You Forgive Her?’ Trollope begins his masterful series of Parliamentary novels, but here he is concerned with the politics of love and the demands of society. Alice Vavasor, lovely, intelligent and just a bit prudish, is torn between two men – the upright if plodding John Gray, and the evasive yet alluring George Vavasor. She has accepted and rejected their proposals of marriage, uncertain of her own worthiness and the worth of her love. Alice’s dilemma makes for a sharp exploration of free choice, a woman’s role in a constricted society, and self-examination to the point of emotional stalemate. Add to this the predicament, on a grander scale, of Lady Glencora Palliser, Alice’s cousin. The energetic, vivacious and utterly charming Glencora is married to Plantagent Palliser, heir to a ducal throne, who is a man who finds passion in Parliamentary proceedings, not people. Glencora is still pining for the beautiful ne’er-do-well, Burgo Fitzgerald, whom she was forced to leave behind in order to marry as she had been groomed to. Glencora feels that her young marriage is a sham. She feels she cannot live a life without ardent love, that the future for her is bleak without a burning, almost tragic, passion. Here, Trollope examines a marriage in its first tentative stages, with all of the self-sacrifice, compromise and reluctant devotion that marriage entails. Trollope takes us through the agonizing conflicts of his characters, drawn with a depth and nuance matched by few in literature. This is a towering achievement.

Whether or no, she, whom you are to forgive, if you can, did or did not belong to the Upper Ten Thousand of this our English world, I am not prepared to say with any strength of affirmation. By blood she was connected with big people,–distantly connected with some very big people indeed, people who belonged to the Upper Ten Hundred if there be any such division; but of these very big relations she had known and seen little, and they had cared as little for her. Her grandfather, Squire Vavasor of Vavasor Hall, in Westmoreland, was a country gentleman, possessing some thousand a year at the outside, and he therefore never came up to London, and had no ambition to have himself numbered as one in any exclusive set. A hot-headed, ignorant, honest old gentleman, he lived ever at Vavasor Hall, declaring to any who would listen to him, that the country was going to the mischief, and congratulating himself that at any rate, in his county, parliamentary reform had been powerless to alter the old political arrangements. Alice Vavasor, whose offence against the world I am to tell you, and if possible to excuse, was the daughter of his younger son; and as her father, John Vavasor, had done nothing to raise the family name to eminence, Alice could not lay claim to any high position from her birth as a Vavasor. John Vavasor had come up to London early in life as a barrister, and had failed. He had failed at least in attaining either much wealth or much repute, though he had succeeded in earning, or perhaps I might better say, in obtaining, a livelihood. He had married a lady somewhat older than himself, who was in possession of four hundred a year, and who was related to those big people to whom I have alluded. Who these were and the special nature of the relationship, I shall be called upon to explain hereafter, but at present it will suffice to say that Alice Macleod gave great offence to all her friends by her marriage. She did not, however, give them much time for the indulgence of their anger. Having given birth to a daughter within twelve months of her marriage, she died, leaving in abeyance that question as to whether the fault of her marriage should or should not be pardoned by her family.

When a man marries an heiress for her money, if that money be within her own control, as was the case with Miss Macleod’s fortune, it is generally well for the speculating lover that the lady’s friends should quarrel with him and with her. She is thereby driven to throw herself entirely into the gentleman’s arms, and he thus becomes possessed of the wife and the money without the abominable nuisance of stringent settlements. But the Macleods, though they quarrelled with Alice, did not quarrel with her à l’outrance. They snubbed herself and her chosen husband; but they did not so far separate themselves from her and her affairs as to give up the charge of her possessions. Her four hundred a year was settled very closely on herself and on her children, without even a life interest having been given to Mr. Vavasor, and therefore when she died the mother’s fortune became the property of the little baby. But, under these circumstances, the big people did not refuse to interest themselves to some extent on behalf of the father. I do not suppose that any actual agreement or compact was made between Mr. Vavasor and the Macleods; but it came to be understood between them that if he made no demand upon them for his daughter’s money, and allowed them to have charge of her education, they would do something for him. He was a practising barrister, though his practice had never amounted to much; and a practising barrister is always supposed to be capable of filling any situation which may come his way. Two years after his wife’s death Mr. Vavasor was appointed assistant commissioner in some office which had to do with insolvents, and which was abolished three years after his appointment. It was at first thought that he would keep his eight hundred a year for life and be required to do nothing for it; but a wretched cheeseparing Whig government, as John Vavasor called it when describing the circumstances of the arrangement to his father, down in Westmoreland, would not permit this; it gave him the option of taking four hundred a year for doing nothing, or of keeping his whole income and attending three days a week for three hours a day during term time, at a miserable dingy little office near Chancery Lane, where his duty would consist in signing his name to accounts which he never read, and at which he was never supposed even to look. He had sulkily elected to keep the money, and this signing had been now for nearly twenty years the business of his life.