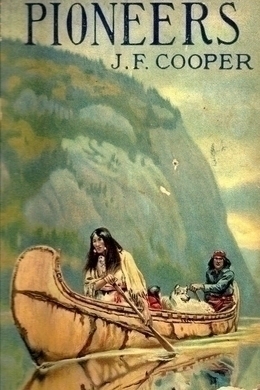 Sources of the Susquehanna; a Descriptive Tale

Although The Pioneers was first of the “Leatherstocking” books to be published, the period of time covered (principally 1793) makes it the fourth chronologically. The story takes place on the rapidly advancing frontier of New York State and features a middle-aged Leatherstocking (Natty Bumppo), Judge Marmaduke Temple of Templeton, whose life parallels that of the author’s father Judge William Cooper, and Elizabeth Temple (Cooper’s sister), of Cooperstown. The story begins with an argument between the Judge and the Leatherstocking over who killed a buck, and as Cooper reviews many of the changes to his fictional Lake Otsego, questions of environmental stewardship, conservation, and use prevail. The plot develops as the Leatherstocking and Chingachgook begin to compete with the Temples for the loyalties of a mysterious young visitor, “Oliver Edwards,” the “young hunter,” who eventually marries Elizabeth. Chingachgook dies, exemplifying the vexed figure of the “dying Indian,” and Natty vanishes into the sunset. For all its strange twists and turns, ‘The Pioneers’ may be considered one of the first ecological novels in the United States. (source: Wikipedia)

Near the centre of the State of New York lies an extensive district of country whose surface is a succession of hills and dales, or, to speak with greater deference to geographical definitions, of mountains and valleys. It is among these hills that the Delaware takes its rise; and flowing from the limpid lakes and thousand springs of this region the numerous sources of the Susquehanna meander through the valleys until, uniting their streams, they form one of the proudest rivers of the United States. The mountains are generally arable to the tops, although instances are not wanting where the sides are jutted with rocks that aid greatly in giving to the country that romantic and picturesque character which it so eminently possesses. The vales are narrow, rich, and cultivated, with a stream uniformly winding through each. Beautiful and thriving villages are found interspersed along the margins of the small lakes, or situated at those points of the streams which are favorable for manufacturing; and neat and comfortable farms, with every indication of wealth about them, are scattered profusely through the vales, and even to the mountain tops. Roads diverge in every direction from the even and graceful bottoms of the valleys to the most rugged and intricate passes of the hills. Academies and minor edifices of learning meet the eye of the stranger at every few miles as be winds his way through this uneven territory, and places for the worship of God abound with that frequency which characterize a moral and reflecting people, and with that variety of exterior and canonical government which flows from unfettered liberty of conscience. In short, the whole district is hourly exhibiting how much can be done, in even a rugged country and with a severe climate, under the dominion of mild laws, and where every man feels a direct interest in the prosperity of a commonwealth of which he knows himself to form a part. The expedients of the pioneers who first broke ground in the settlement of this country are succeeded by the permanent improvements of the yeoman who intends to leave his remains to moulder under the sod which he tills, or perhaps of the son, who, born in the land, piously wishes to linger around the grave of his father. Only forty years * have passed since this territory was a wilderness.

Very soon after the establishment of the independence of the States by the peace of 1783, the enterprise of their citizens was directed to a development of the natural ad vantages of their widely extended dominions. Before the war of the Revolution, the inhabited parts of the colony of New York were limited to less than a tenth of its possessions, A narrow belt of country, extending for a short distance on either side of the Hudson, with a similar occupation of fifty miles on the banks of the Mohawk, together with the islands of Nassau and Staten, and a few insulated settlements on chosen land along the margins of streams, composed the country, which was then inhabited by less than two hundred thousand souls. Within the short period we have mentioned, the population has spread itself over five degrees of latitude and seven of longitude, and has swelled to a million and a half of inhabitants, who are maintained in abundance, and can look forward to ages before the evil day must arrive when their possessions shall become unequal to their wants.

It was near the setting of the sun, on a clear, cold day in December, when a sleigh was moving slowly up one of the mountains in the district we have described. The day had been fine for the season, and but two or three large clouds, whose color seemed brightened by the light reflected from the mass of snow that covered the earth, floated in a sky of the purest blue. The road wound along the brow of a precipice, and on one side was upheld by a foundation of logs piled one upon the other, while a narrow excavation in the mountain in the opposite direction had made a passage of sufficient width for the ordinary travelling of that day. But logs, excavation, and every thing that did not reach several feet above the earth lay alike buried beneath the snow. A single track, barely wide enough to receive the sleigh, * denoted the route of the highway, and this was sunk nearly two feet below the surrounding surface.