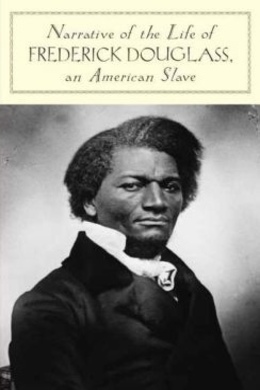 The Narrative of the Life of Frederick Douglass

Born into a family of slaves, Frederick Douglass educated himself through sheer determination. His unconquered will to triumph over his circumstances makes his one of America’s best and most unlikely success stories. Douglass’ own account of his journey from slave to one of America’s great statesmen, writers, and orators is as fascinating as it is inspiring.

I was born in Tuckahoe, near Hillsborough, and about twelve miles from Easton, in Talbot county, Maryland. I have no accurate knowledge of my age, never having seen any authentic record containing it. By far the larger part of the slaves know as little of their ages as horses know of theirs, and it is the wish of most masters within my knowledge to keep their slaves thus ignorant. I do not remember to have ever met a slave who could tell of his birthday. They seldom come nearer to it than planting-time, harvest-time, cherry-time, spring-time, or fall-time. A want of information concerning my own was a source of unhappiness to me even during childhood. The white children could tell their ages. I could not tell why I ought to be deprived of the same privilege. I was not allowed to make any inquiries of my master concerning it. He deemed all such inquiries on the part of a slave improper and impertinent, and evidence of a restless spirit. The nearest estimate I can give makes me now between twenty-seven and twenty-eight years of age. I come to this, from hearing my master say, some time during 1835, I was about seventeen years old.

My mother was named Harriet Bailey. She was the daughter of Isaac and Betsey Bailey, both colored, and quite dark. My mother was of a darker complexion than either my grandmother or grandfather.

My father was a white man. He was admitted to be such by all I ever heard speak of my parentage. The opinion was also whispered that my master was my father; but of the correctness of this opinion, I know nothing; the means of knowing was withheld from me. My mother and I were separated when I was but an infant–before I knew her as my mother. It is a common custom, in the part of Maryland from which I ran away, to part children from their mothers at a very early age. Frequently, before the child has reached its twelfth month, its mother is taken from it, and hired out on some farm a considerable distance off, and the child is placed under the care of an old woman, too old for field labor. For what this separation is done, I do not know, unless it be to hinder the development of the child’s affection toward its mother, and to blunt and destroy the natural affection of the mother for the child. This is the inevitable result.

I never saw my mother, to know her as such, more than four or five times in my life; and each of these times was very short in duration, and at night. She was hired by a Mr. Stewart, who lived about twelve miles from my home. She made her journeys to see me in the night, travelling the whole distance on foot, after the performance of her day’s work. She was a field hand, and a whipping is the penalty of not being in the field at sunrise, unless a slave has special permission from his or her master to the contrary–a permission which they seldom get, and one that gives to him that gives it the proud name of being a kind master. I do not recollect of ever seeing my mother by the light of day. She was with me in the night. She would lie down with me, and get me to sleep, but long before I waked she was gone. Very little communication ever took place between us. Death soon ended what little we could have while she lived, and with it her hardships and suffering. She died when I was about seven years old, on one of my master’s farms, near Lee’s Mill. I was not allowed to be present during her illness, at her death, or burial. She was gone long before I knew any thing about it. Never having enjoyed, to any considerable extent, her soothing presence, her tender and watchful care, I received the tidings of her death with much the same emotions I should have probably felt at the death of a stranger.

Called thus suddenly away, she left me without the slightest intimation of who my father was. The whisper that my master was my father, may or may not be true; and, true or false, it is of but little consequence to my purpose whilst the fact remains, in all its glaring odiousness, that slaveholders have ordained, and by law established, that the children of slave women shall in all cases follow the condition of their mothers; and this is done too obviously to administer to their own lusts, and make a gratification of their wicked desires profitable as well as pleasurable; for by this cunning arrangement, the slaveholder, in cases not a few, sustains to his slaves the double relation of master and father.

I know of such cases; and it is worthy of remark that such slaves invariably suffer greater hardships, and have more to contend with, than others. They are, in the first place, a constant offence to their mistress. She is ever disposed to find fault with them; they can seldom do any thing to please her; she is never better pleased than when she sees them under the lash, especially when she suspects her husband of showing to his mulatto children favors which he withholds from his black slaves.