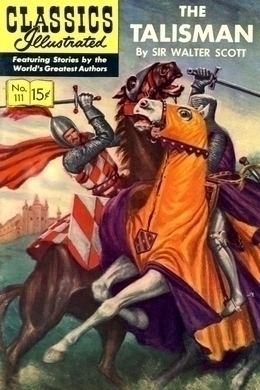 The Talisman is Sir Walter Scott’s tale of the Crusades – a tale of chivalry, of violence, of virtue, romance, and deceit. In Scott’s own words: “…the warlike character of Richard I, wild and generous, a pattern of chivalry, with all its extravagant virtues, and its no less absurd errors, was opposed to that of Saladin, in which the Christian and English monarch showed all the cruelty and violence of an Eastern sultan, and Saladin, on the other hand, displayed the deep policy and prudence of a European sovereign, whilst each contended which should excel the other in the knightly qualities of bravery and generosity. This singular contrast afforded, as the author conceived, materials for a work of fiction possessing peculiar interest.”

The burning sun of Syria had not yet attained its highest point in the horizon, when a knight of the Red Cross, who had left his distant northern home and joined the host of the Crusaders in Palestine, was pacing slowly along the sandy deserts which lie in the vicinity of the Dead Sea, or, as it is called, the Lake Asphaltites, where the waves of the Jordan pour themselves into an inland sea, from which there is no discharge of waters.

The warlike pilgrim had toiled among cliffs and precipices during the earlier part of the morning. More lately, issuing from those rocky and dangerous defiles, he had entered upon that great plain, where the accursed cities provoked, in ancient days, the direct and dreadful vengeance of the Omnipotent.

The toil, the thirst, the dangers of the way, were forgotten, as the traveller recalled the fearful catastrophe which had converted into an arid and dismal wilderness the fair and fertile valley of Siddim, once well watered, even as the Garden of the Lord, now a parched and blighted waste, condemned to eternal sterility.

Crossing himself, as he viewed the dark mass of rolling waters, in colour as in duality unlike those of any other lake, the traveller shuddered as he remembered that beneath these sluggish waves lay the once proud cities of the plain, whose grave was dug by the thunder of the heavens, or the eruption of subterraneous fire, and whose remains were hid, even by that sea which holds no living fish in its bosom, bears no skiff on its surface, and, as if its own dreadful bed were the only fit receptacle for its sullen waters, sends not, like other lakes, a tribute to the ocean. The whole land around, as in the days of Moses, was “brimstone and salt; it is not sown, nor beareth, nor any grass groweth thereon.” The land as well as the lake might be termed dead, as producing nothing having resemblance to vegetation, and even the very air was entirely devoid of its ordinary winged inhabitants, deterred probably by the odour of bitumen and sulphur which the burning sun exhaled from the waters of the lake in steaming clouds, frequently assuming the appearance of waterspouts. Masses of the slimy and sulphureous substance called naphtha, which floated idly on the sluggish and sullen waves, supplied those rolling clouds with new vapours, and afforded awful testimony to the truth of the Mosaic history.

Upon this scene of desolation the sun shone with almost intolerable splendour, and all living nature seemed to have hidden itself from the rays, excepting the solitary figure which moved through the flitting sand at a foot’s pace, and appeared the sole breathing thing on the wide surface of the plain. The dress of the rider and the accoutrements of his horse were peculiarly unfit for the traveller in such a country. A coat of linked mail, with long sleeves, plated gauntlets, and a steel breastplate, had not been esteemed a sufficient weight of armour; there were also his triangular shield suspended round his neck, and his barred helmet of steel, over which he had a hood and collar of mail, which was drawn around the warrior’s shoulders and throat, and filled up the vacancy between the hauberk and the headpiece. His lower limbs were sheathed, like his body, in flexible mail, securing the legs and thighs, while the feet rested in plated shoes, which corresponded with the gauntlets. A long, broad, straight-shaped, double-edged falchion, with a handle formed like a cross, corresponded with a stout poniard on the other side. The knight also bore, secured to his saddle, with one end resting on his stirrup, the long steel-headed lance, his own proper weapon, which, as he rode, projected backwards, and displayed its little pennoncelle, to dally with the faint breeze, or drop in the dead calm. To this cumbrous equipment must be added a surcoat of embroidered cloth, much frayed and worn, which was thus far useful that it excluded the burning rays of the sun from the armour, which they would otherwise have rendered intolerable to the wearer. The surcoat bore, in several places, the arms of the owner, although much defaced. These seemed to be a couchant leopard, with the motto, “I sleep; wake me not.” An outline of the same device might be traced on his shield, though many a blow had almost effaced the painting. The flat top of his cumbrous cylindrical helmet was unadorned with any crest. In retaining their own unwieldy defensive armour, the Northern Crusaders seemed to set at defiance the nature of the climate and country to which they had come to war.