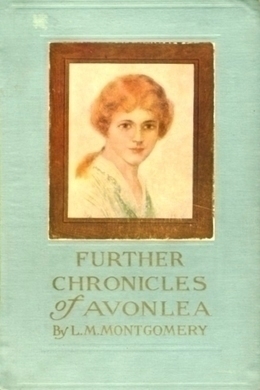 Nestled in the seaside hills of Prince Edward Island, there’s a road to a place called Green Gables where a girl named Anne grew up. Here, not far from the cold Atlantic and close to the warmth of a loving heart, is Avonlea. In this second volume of wonderful adventures a ghostly appearance in a garden teaches us about the real meaning of love…a pretty young girl risks losing her dear mother to find the father she never knew…and a foolish lie threatens to make a spinster the town’s laughing stock when an imaginary lover comes to town for real! Warm and touching, rich and exciting, these and a dozen more delightful tales are stories to cherish, in a book you’ll never want to end.

Max always blesses the animal when it is referred to; and I don’t deny that things have worked together for good after all. But when I think of the anguish of mind which Ismay and I underwent on account of that abominable cat, it is not a blessing that arises uppermost in my thoughts.

I never was fond of cats, although I admit they are well enough in their place, and I can worry along comfortably with a nice, matronly old tabby who can take care of herself and be of some use in the world. As for Ismay, she hates cats and always did.

But Aunt Cynthia, who adored them, never could bring herself to understand that any one could possibly dislike them. She firmly believed that Ismay and I really liked cats deep down in our hearts, but that, owing to some perverse twist in our moral natures, we would not own up to it, but willfully persisted in declaring we didn’t.

Of all cats I loathed that white Persian cat of Aunt Cynthia’s. And, indeed, as we always suspected and finally proved, Aunt herself looked upon the creature with more pride than affection. She would have taken ten times the comfort in a good, common puss that she did in that spoiled beauty. But a Persian cat with a recorded pedigree and a market value of one hundred dollars tickled Aunt Cynthia’s pride of possession to such an extent that she deluded herself into believing that the animal was really the apple of her eye.

It had been presented to her when a kitten by a missionary nephew who had brought it all the way home from Persia; and for the next three years Aunt Cynthia’s household existed to wait on that cat, hand and foot. It was snow-white, with a bluish-gray spot on the tip of its tail; and it was blue-eyed and deaf and delicate. Aunt Cynthia was always worrying lest it should take cold and die. Ismay and I used to wish that it would–we were so tired of hearing about it and its whims. But we did not say so to Aunt Cynthia. She would probably never have spoken to us again and there was no wisdom in offending Aunt Cynthia. When you have an unencumbered aunt, with a fat bank account, it is just as well to keep on good terms with her, if you can. Besides, we really liked Aunt Cynthia very much–at times. Aunt Cynthia was one of those rather exasperating people who nag at and find fault with you until you think you are justified in hating them, and who then turn round and do something so really nice and kind for you that you feel as if you were compelled to love them dutifully instead.

So we listened meekly when she discoursed on Fatima–the cat’s name was Fatima–and, if it was wicked of us to wish for the latter’s decease, we were well punished for it later on.

One day, in November, Aunt Cynthia came sailing out to Spencervale. She really came in a phaeton, drawn by a fat gray pony, but somehow Aunt Cynthia always gave you the impression of a full rigged ship coming gallantly on before a favorable wind.

That was a Jonah day for us all through. Everything had gone wrong. Ismay had spilled grease on her velvet coat, and the fit of the new blouse I was making was hopelessly askew, and the kitchen stove smoked and the bread was sour. Moreover, Huldah Jane Keyson, our tried and trusty old family nurse and cook and general “boss,” had what she called the “realagy” in her shoulder; and, though Huldah Jane is as good an old creature as ever lived, when she has the “realagy” other people who are in the house want to get out of it and, if they can’t, feel about as comfortable as St. Lawrence on his gridiron.

And on top of this came Aunt Cynthia’s call and request.

“Dear me,” said Aunt Cynthia, sniffing, “don’t I smell smoke? You girls must manage your range very badly. Mine never smokes. But it is no more than one might expect when two girls try to keep house without a man about the place.”

“We get along very well without a man about the place,” I said loftily. Max hadn’t been in for four whole days and, though nobody wanted to see him particularly, I couldn’t help wondering why. “Men are nuisances.”

“I dare say you would like to pretend you think so,” said Aunt Cynthia, aggravatingly. “But no woman ever does really think so, you know. I imagine that pretty Anne Shirley, who is visiting Ella Kimball, doesn’t. I saw her and Dr. Irving out walking this afternoon, looking very well satisfied with themselves. If you dilly-dally much longer, Sue, you will let Max slip through your fingers yet.”

That was a tactful thing to say to ME, who had refused Max Irving so often that I had lost count. I was furious, and so I smiled most sweetly on my maddening aunt.

“Dear Aunt, how amusing of you,” I said, smoothly. “You talk as if I wanted Max.”

“So you do,” said Aunt Cynthia.

“If so, why should I have refused him time and again?” I asked, smilingly. Right well Aunt Cynthia knew I had. Max always told her.