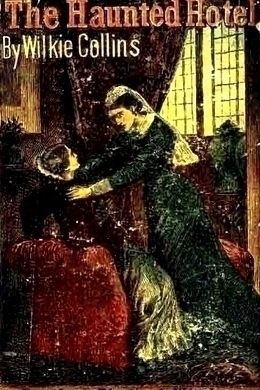 This is a unique collection of strange stories from the cunning pen of Wilkie Collins, author of The Woman in White and The Moonstone. The star attraction is the novella The Haunted Hotel, a clever combination of detective and ghost story set in Venice, a city of grim waterways, dark shadows and death. The action takes place in an ancient palazzo coverted into a modern hotel that houses a grisly secret. The supernatural horror, relentless pace, tight narrative, and a doomed countess characterise and distinguish this powerful tale.

In the year 1860, the reputation of Doctor Wybrow as a London physician reached its highest point. It was reported on good authority that he was in receipt of one of the largest incomes derived from the practice of medicine in modern times.

One afternoon, towards the close of the London season, the Doctor had just taken his luncheon after a specially hard morning’s work in his consulting-room, and with a formidable list of visits to patients at their own houses to fill up the rest of his day–when the servant announced that a lady wished to speak to him.

‘I see no strangers out of consulting-hours. Tell her what the hours are, and send her away.’

‘Won’t go?’ The Doctor smiled as he repeated the words. He was a humourist in his way; and there was an absurd side to the situation which rather amused him. ‘Has this obstinate lady given you her name?’ he inquired.

‘No, sir. She refused to give any name–she said she wouldn’t keep you five minutes, and the matter was too important to wait till to-morrow. There she is in the consulting-room; and how to get her out again is more than I know.’

Doctor Wybrow considered for a moment. His knowledge of women (professionally speaking) rested on the ripe experience of more than thirty years; he had met with them in all their varieties–especially the variety which knows nothing of the value of time, and never hesitates at sheltering itself behind the privileges of its sex. A glance at his watch informed him that he must soon begin his rounds among the patients who were waiting for him at their own houses. He decided forthwith on taking the only wise course that was open under the circumstances. In other words, he decided on taking to flight.

‘Is the carriage at the door?’ he asked.

‘Very well. Open the house-door for me without making any noise, and leave the lady in undisturbed possession of the consulting-room. When she gets tired of waiting, you know what to tell her. If she asks when I am expected to return, say that I dine at my club, and spend the evening at the theatre. Now then, softly, Thomas! If your shoes creak, I am a lost man.’

He noiselessly led the way into the hall, followed by the servant on tip-toe.

Did the lady in the consulting-room suspect him? or did Thomas’s shoes creak, and was her sense of hearing unusually keen? Whatever the explanation may be, the event that actually happened was beyond all doubt. Exactly as Doctor Wybrow passed his consulting-room, the door opened–the lady appeared on the threshold–and laid her hand on his arm.

‘I entreat you, sir, not to go away without letting me speak to you first.’

The accent was foreign; the tone was low and firm. Her fingers closed gently, and yet resolutely, on the Doctor’s arm.

Neither her language nor her action had the slightest effect in inclining him to grant her request. The influence that instantly stopped him, on the way to his carriage, was the silent influence of her face. The startling contrast between the corpse-like pallor of her complexion and the overpowering life and light, the glittering metallic brightness in her large black eyes, held him literally spell-bound. She was dressed in dark colours, with perfect taste; she was of middle height, and (apparently) of middle age–say a year or two over thirty. Her lower features–the nose, mouth, and chin–possessed the fineness and delicacy of form which is oftener seen among women of foreign races than among women of English birth. She was unquestionably a handsome person–with the one serious drawback of her ghastly complexion, and with the less noticeable defect of a total want of tenderness in the expression of her eyes. Apart from his first emotion of surprise, the feeling she produced in the Doctor may be described as an overpowering feeling of professional curiosity. The case might prove to be something entirely new in his professional experience. ‘It looks like it,’ he thought; ‘and it’s worth waiting for.’

She perceived that she had produced a strong impression of some kind upon him, and dropped her hold on his arm.

‘You have comforted many miserable women in your time,’ she said. ‘Comfort one more, to-day.’

Without waiting to be answered, she led the way back into the room.

The Doctor followed her, and closed the door. He placed her in the patients’ chair, opposite the windows. Even in London the sun, on that summer afternoon, was dazzlingly bright. The radiant light flowed in on her. Her eyes met it unflinchingly, with the steely steadiness of the eyes of an eagle. The smooth pallor of her unwrinkled skin looked more fearfully white than ever. For the first time, for many a long year past, the Doctor felt his pulse quicken its beat in the presence of a patient.