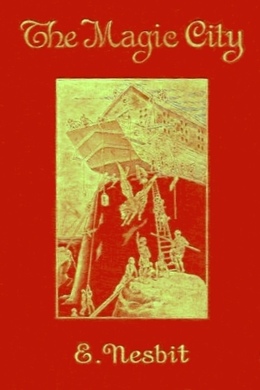 When young Philip Haldane builds a play city out of odds and ends, the fantastic creation comes to life, and he and new stepsister Lucy are magically transported into it. Now they must try to save the Magic City by fulfilling an ancient prophecy–despite a mysterious adversary determined to steal their glory for herself. How Philip and Lucy come to forge a friendship and together triumph over impending disaster makes for a riveting read.

Philip had no one but his sister, and she had no one but Philip. Their parents were dead, and Helen, who was twenty years older than Philip and was really his half-sister, was all the mother he had ever known. And he had never envied other boys their mothers, because Helen was so kind and clever and dear. She gave up almost all her time to him; she taught him all the lessons he learned; she played with him, inventing the most wonderful new games and adventures. So that every morning when Philip woke he knew that he was waking to a new day of joyous and interesting happenings. And this went on till Philip was ten years old, and he had no least shadow of a doubt that it would go on for ever. The beginning of the change came one day when he and Helen had gone for a picnic to the wood where the waterfall was, and as they were driving back behind the stout old pony, who was so good and quiet that Philip was allowed to drive it. They were coming up the last lane before the turning where their house was, and Helen said:

‘To-morrow we’ll weed the aster bed and have tea in the garden.’

‘Jolly,’ said Philip, and they turned the corner and came in sight of their white little garden gate. And a man was coming out of it–a man who was not one of the friends they both knew. He turned and came to meet them. Helen put her hand on the reins–a thing which she had always taught Philip was never done–and the pony stopped. The man, who was, as Philip put it to himself, ‘tall and tweedy,’ came across in front of the pony’s nose and stood close by the wheel on the side where Helen sat. She shook hands with him, and said, ‘How do you do?’ in quite the usual way. But after that they whispered. Whispered! And Philip knew how rude it is to whisper, because Helen had often told him this. He heard one or two words, ‘at last,’ and ‘over now,’ and ‘this evening, then.’

After that Helen said, ‘This is my brother Philip,’ and the man shook hands with him–across Helen, another thing which Philip knew was not manners, and said, ‘I hope we shall be the best of friends.’ Pip said, ‘How do you do?’ because that is the polite thing to say. But inside himself he said, ‘I don’t want to be friends with you.’

Then the man took off his hat and walked away, and Philip and his sister went home. She seemed different, somehow, and he was sent to bed a little earlier than usual, but he could not go to sleep for a long time, because he heard the front-door bell ring and afterwards a man’s voice and Helen’s going on and on in the little drawing-room under the room which was his bedroom. He went to sleep at last, and when he woke up in the morning it was raining, and the sky was grey and miserable. He lost his collar-stud, he tore one of his stockings as he pulled it on, he pinched his finger in the door, and he dropped his tooth-mug, with water in it too, and the mug was broken and the water went into his boots. There are mornings, you know, when things happen like that. This was one of them.

Then he went down to breakfast, which tasted not quite so nice as usual. He was late, of course. The bacon fat was growing grey with waiting for him, as Helen said, in the cheerful voice that had always said all the things he liked best to hear. But Philip didn’t smile. It did not seem the sort of morning for smiling, and the grey rain beat against the window.

After breakfast Helen said, ‘Tea in the garden is indefinitely postponed, and it’s too wet for lessons.’

That was one of her charming ideas–that wet days should not be made worse by lessons.

‘What shall we do?’ she said; ‘shall we talk about the island? Shall I make another map of it? And put in all the gardens and fountains and swings?’

The island was a favourite play. Somewhere in the warm seas where palm trees are, and rainbow-coloured sands, the island was said to be–their own island, beautified by their fancy with everything they liked and wanted, and Philip was never tired of talking about it. There were times when he almost believed that the island was real. He was king of the island and Helen was queen, and no one else was to be allowed on it. Only these two.

But this morning even the thought of the island failed to charm. Philip straggled away to the window and looked out dismally at the soaked lawn and the dripping laburnum trees, and the row of raindrops hanging fat and full on the iron gate.

‘What is it, Pippin?’ Helen asked. ‘Don’t tell me you’re going to have horrid measles, or red-hot scarlet fever, or noisy whooping-cough.’