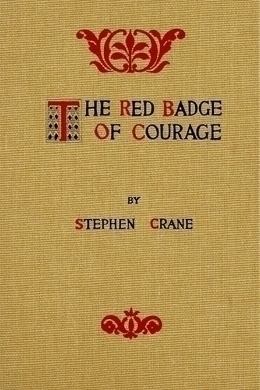 The Red Badge of Courage

An Episode of the American Civil War

American writer Stephen Crane is best known for his classic depiction of the American Civil War in his novel the Red Badge of Courage. It is the story of a 19-year-old boy named Henry Fleming who struggles to overcome his fear in battle. The Red Badge of Courage is widely regarded for its realistic depiction of a young man in battle and of the true meaning of courage. in addition to this classic novel several other of Crane’s more popular shorter works have been added. These stories include the following: the Veteran, the Open Boat, the Bride comes to Yellow Sky, the Blue Hotel, a Self-Made Man, a Mystery of Heroism, a Gray Sleeve, Three Miraculous Soldiers, the Little Regiment, An Indiana Campaign, and An Episode of War.

The cold passed reluctantly from the earth, and the retiring fogs revealed an army stretched out on the hills, resting. As the landscape changed from brown to green, the army awakened, and began to tremble with eagerness at the noise of rumors. It cast its eyes upon the roads, which were growing from long troughs of liquid mud to proper thoroughfares. A river, amber-tinted in the shadow of its banks, purled at the army’s feet; and at night, when the stream had become of a sorrowful blackness, one could see across it the red, eyelike gleam of hostile camp-fires set in the low brows of distant hills.

Once a certain tall soldier developed virtues and went resolutely to wash a shirt. He came flying back from a brook waving his garment bannerlike. He was swelled with a tale he had heard from a reliable friend, who had heard it from a truthful cavalryman, who had heard it from his trustworthy brother, one of the orderlies at division headquarters. He adopted the important air of a herald in red and gold. “We’re goin’ t’ move t’morrah–sure,” he said pompously to a group in the company street. “We’re goin’ ‘way up the river, cut across, an’ come around in behint ‘em.”

To his attentive audience he drew a loud and elaborate plan of a very brilliant campaign. When he had finished, the blue-clothed men scattered into small arguing groups between the rows of squat brown huts. A negro teamster who had been dancing upon a cracker box with the hilarious encouragement of twoscore soldiers was deserted. He sat mournfully down. Smoke drifted lazily from a multitude of quaint chimneys.

“It’s a lie! that’s all it is–a thunderin’ lie!” said another private loudly. His smooth face was flushed, and his hands were thrust sulkily into his trousers’ pockets. He took the matter as an affront to him. “I don’t believe the derned old army’s ever going to move. We’re set. I’ve got ready to move eight times in the last two weeks, and we ain’t moved yet.”

The tall soldier felt called upon to defend the truth of a rumor he himself had introduced. He and the loud one came near to fighting over it.

A corporal began to swear before the assemblage. He had just put a costly board floor in his house, he said. During the early spring he had refrained from adding extensively to the comfort of his environment because he had felt that the army might start on the march at any moment. Of late, however, he had been impressed that they were in a sort of eternal camp.

Many of the men engaged in a spirited debate. One outlined in a peculiarly lucid manner all the plans of the commanding general. He was opposed by men who advocated that there were other plans of campaign. They clamored at each other, numbers making futile bids for the popular attention. Meanwhile, the soldier who had fetched the rumor bustled about with much importance. He was continually assailed by questions.

There was much food for thought in the manner in which he replied. He came near to convincing them by disdaining to produce proofs. They grew excited over it.

There was a youthful private who listened with eager ears to the words of the tall soldier and to the varied comments of his comrades. After receiving a fill of discussions concerning marches and attacks, he went to his hut and crawled through an intricate hole that served it as a door. He wished to be alone with some new thoughts that had lately come to him.

He lay down on a wide bank that stretched across the end of the room. In the other end, cracker boxes were made to serve as furniture. They were grouped about the fireplace. A picture from an illustrated weekly was upon the log walls, and three rifles were paralleled on pegs. Equipments hunt on handy projections, and some tin dishes lay upon a small pile of firewood. A folded tent was serving as a roof. The sunlight, without, beating upon it, made it glow a light yellow shade. A small window shot an oblique square of whiter light upon the cluttered floor. The smoke from the fire at times neglected the clay chimney and wreathed into the room, and this flimsy chimney of clay and sticks made endless threats to set ablaze the whole establishment.

The youth was in a little trance of astonishment. So they were at last going to fight. On the morrow, perhaps, there would be a battle, and he would be in it. For a time he was obliged to labor to make himself believe. He could not accept with assurance an omen that he was about to mingle in one of those great affairs of the earth.