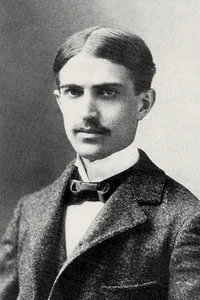 Stephen Crane was an American author. Prolific throughout his short life, he wrote notable works in the Realist tradition as well as early examples of American Naturalism and Impressionism. He is recognized by modern critics as one of the most innovative writers of his generation. Crane began writing at the age of four and had published several articles by the age of 16. Having little interest in university studies, he left school in 1891 to work as a reporter and writer. Crane’s first novel was the 1893 Bowery tale Maggie: A Girl of the Streets, generally considered by critics to be the first work of American literary Naturalism. He won international acclaim in 1895 for his Civil War novel The Red Badge of Courage, which he wrote without any battle experience.

Remarkably prolific writer Stephen Crane died of tuberculosis at the tender age of 28. But in the years before his premature demise, Crane exerted a pro...read more »

This harrowing tale of a young girl in the slums is a searing portrayal of turn-of-the-century New York, and Stephen Crane’s most innovative work. When ...read more »

The story takes place in the small, fictional town of Whilomville, New York. An African-American coachman named Henry Johnson, who is employed by the to...read more »

American writer Stephen Crane is best known for his classic depiction of the American Civil War in his novel the Red Badge of Courage. It is the story o...read more »

War is Kind, was unconventional for the time in that it was written in free verse without rhyme, meter, or even titles for individual works. They are ty...read more »