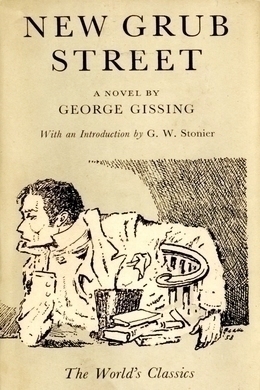 For many readers New Grub Street is Gissing’s masterpiece. If this is not accepted, it remains beyond doubt one of his most interesting and most powerful novels. As a realistic picture of the literary in late Victorian England, New Grub Street has few rivals. There is much of Gissing himself, his idealism, pride, impracticality, in Edwin Reardon the study of the creative artist oppressed by poverty bears the stamp of bitter experience. Of the other characters, pedantic Alfred Yule, the humble scholar Biffen, ambitious and worldly Jasper Milvain are still recognizable literary types. New Grub Street is a sombre and moving story, cynical in its conclusions, but deriving from its close observation and deep integrity a lasting importance for students of character and period.

As the Milvains sat down to breakfast the clock of Wattleborough parish church struck eight; it was two miles away, but the strokes were borne very distinctly on the west wind this autumn morning. Jasper, listening before he cracked an egg, remarked with cheerfulness:

‘There’s a man being hanged in London at this moment.’

‘Surely it isn’t necessary to let us know that,’ said his sister Maud, coldly.

‘And in such a tone, too!’ protested his sister Dora.

‘Who is it?’ inquired Mrs Milvain, looking at her son with pained forehead.

‘I don’t know. It happened to catch my eye in the paper yesterday that someone was to be hanged at Newgate this morning. There’s a certain satisfaction in reflecting that it is not oneself.’

‘That’s your selfish way of looking at things,’ said Maud.

‘Well,’ returned Jasper, ‘seeing that the fact came into my head, what better use could I make of it? I could curse the brutality of an age that sanctioned such things; or I could grow doleful over the misery of the poor–fellow. But those emotions would be as little profitable to others as to myself. It just happened that I saw the thing in a light of consolation. Things are bad with me, but not so bad as THAT. I might be going out between Jack Ketch and the Chaplain to be hanged; instead of that, I am eating a really fresh egg, and very excellent buttered toast, with coffee as good as can be reasonably expected in this part of the world.–(Do try boiling the milk, mother.)–The tone in which I spoke was spontaneous; being so, it needs no justification.’

He was a young man of five-and-twenty, well built, though a trifle meagre, and of pale complexion. He had hair that was very nearly black, and a clean-shaven face, best described, perhaps, as of bureaucratic type. The clothes he wore were of expensive material, but had seen a good deal of service. His stand-up collar curled over at the corners, and his necktie was lilac-sprigged.

Of the two sisters, Dora, aged twenty, was the more like him in visage, but she spoke with a gentleness which seemed to indicate a different character. Maud, who was twenty-two, had bold, handsome features, and very beautiful hair of russet tinge; hers was not a face that readily smiled. Their mother had the look and manners of an invalid, though she sat at table in the ordinary way. All were dressed as ladies, though very simply. The room, which looked upon a small patch of garden, was furnished with old-fashioned comfort, only one or two objects suggesting the decorative spirit of 1882.

‘A man who comes to be hanged,’ pursued Jasper, impartially, ‘has the satisfaction of knowing that he has brought society to its last resource. He is a man of such fatal importance that nothing will serve against him but the supreme effort of law. In a way, you know, that is success.’

‘In a way,’ repeated Maud, scornfully.

‘Suppose we talk of something else,’ suggested Dora, who seemed to fear a conflict between her sister and Jasper.

Almost at the same moment a diversion was afforded by the arrival of the post. There was a letter for Mrs Milvain, a letter and newspaper for her son. Whilst the girls and their mother talked of unimportant news communicated by the one correspondent, Jasper read the missive addressed to himself.

‘This is from Reardon,’ he remarked to the younger girl. ‘Things are going badly with him. He is just the kind of fellow to end by poisoning or shooting himself.’

‘Can’t get anything done; and begins to be sore troubled on his wife’s account.’