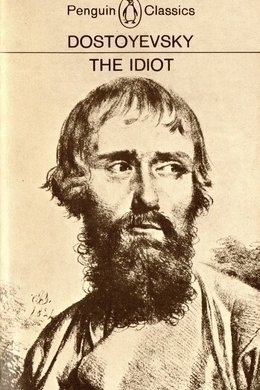 The twenty-six-year-old Prince Myshkin, following a stay of several years in a Swiss sanatorium, returns to Russia to collect an inheritance and be among people. Even before he reaches home he meets the dark Rogozhin, a rich merchant’s son whose obsession with the beautiful Nastasya Filippovna eventually draws all three of them into a tragic denouement. In Petersburg the prince finds himself a stranger in a society obsessed with money, power, and manipulation. Scandal escalates to murder as Dostoevsky traces the surprising effect of this positively beautiful man on the people around him, leading to a final scene that is one of the most powerful in all of world literature.

Towards the end of November, during a thaw, at nine o’clock one morning, a train on the Warsaw and Petersburg railway was approaching the latter city at full speed. The morning was so damp and misty that it was only with great difficulty that the day succeeded in breaking; and it was impossible to distinguish anything more than a few yards away from the carriage windows.

Some of the passengers by this particular train were returning from abroad; but the third-class carriages were the best filled, chiefly with insignificant persons of various occupations and degrees, picked up at the different stations nearer town. All of them seemed weary, and most of them had sleepy eyes and a shivering expression, while their complexions generally appeared to have taken on the colour of the fog outside.

When day dawned, two passengers in one of the third-class carriages found themselves opposite each other. Both were young fellows, both were rather poorly dressed, both had remarkable faces, and both were evidently anxious to start a conversation. If they had but known why, at this particular moment, they were both remarkable persons, they would undoubtedly have wondered at the strange chance which had set them down opposite to one another in a third-class carriage of the Warsaw Railway Company.

One of them was a young fellow of about twenty-seven, not tall, with black curling hair, and small, grey, fiery eyes. His nose was broad and flat, and he had high cheek bones; his thin lips were constantly compressed into an impudent, ironical–it might almost be called a malicious–smile; but his forehead was high and well formed, and atoned for a good deal of the ugliness of the lower part of his face. A special feature of this physiognomy was its death-like pallor, which gave to the whole man an indescribably emaciated appearance in spite of his hard look, and at the same time a sort of passionate and suffering expression which did not harmonize with his impudent, sarcastic smile and keen, self-satisfied bearing. He wore a large fur–or rather astrachan–overcoat, which had kept him warm all night, while his neighbour had been obliged to bear the full severity of a Russian November night entirely unprepared. His wide sleeveless mantle with a large cape to it–the sort of cloak one sees upon travellers during the winter months in Switzerland or North Italy–was by no means adapted to the long cold journey through Russia, from Eydkuhnen to St. Petersburg.

The wearer of this cloak was a young fellow, also of about twenty-six or twenty-seven years of age, slightly above the middle height, very fair, with a thin, pointed and very light coloured beard; his eyes were large and blue, and had an intent look about them, yet that heavy expression which some people affirm to be a peculiarity as well as evidence, of an epileptic subject. His face was decidedly a pleasant one for all that; refined, but quite colourless, except for the circumstance that at this moment it was blue with cold. He held a bundle made up of an old faded silk handkerchief that apparently contained all his travelling wardrobe, and wore thick shoes and gaiters, his whole appearance being very un-Russian.

His black-haired neighbour inspected these peculiarities, having nothing better to do, and at length remarked, with that rude enjoyment of the discomforts of others which the common classes so often show:

“Very,” said his neighbour, readily, “and this is a thaw, too. Fancy if it had been a hard frost! I never thought it would be so cold in the old country. I’ve grown quite out of the way of it.”

“What, been abroad, I suppose?”

“Wheugh! my goodness!” The black-haired young fellow whistled, and then laughed.

The conversation proceeded. The readiness of the fair-haired young man in the cloak to answer all his opposite neighbour’s questions was surprising. He seemed to have no suspicion of any impertinence or inappropriateness in the fact of such questions being put to him. Replying to them, he made known to the inquirer that he certainly had been long absent from Russia, more than four years; that he had been sent abroad for his health; that he had suffered from some strange nervous malady–a kind of epilepsy, with convulsive spasms. His interlocutor burst out laughing several times at his answers; and more than ever, when to the question, “whether he had been cured?” the patient replied:

“Hey! that’s it! You stumped up your money for nothing, and we believe in those fellows, here!” remarked the black-haired individual, sarcastically.

“Gospel truth, sir, Gospel truth!” exclaimed another passenger, a shabbily dressed man of about forty, who looked like a clerk, and possessed a red nose and a very blotchy face. “Gospel truth! All they do is to get hold of our good Russian money free, gratis, and for nothing.”