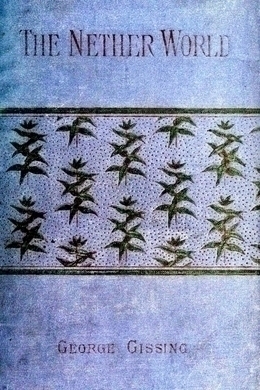 The Nether World, generally regarded as the finest of Gissing’s early novels, is a highly dramatic, sometimes violent tale of man’s caustic vision shaped by the bitter personal experience of poverty. This tale of intrigue depicts life among the artisans, factory-girls, and slum-dwellers, documenting an inescapable world devoid of sentimentality and steeped with people scheming and struggling to survive. With Zolaesque intensity and relentlessness, Gissing lays bare the economic forces which determine the aspirations and expectations of those born to a life of labor.

In the troubled twilight of a March evening ten years ago, an old man, whose equipment and bearing suggested that he was fresh from travel, walked slowly across Clerkenwell Green, and by the graveyard of St. James’s Church stood for a moment looking about him. His age could not be far from seventy, but, despite the stoop of his shoulders, he gave little sign of failing under the burden of years; his sober step indicated gravity of character rather than bodily feebleness, and his grasp of a stout stick was not such as bespeaks need of support. His attire was neither that of a man of leisure, nor of the kind usually worn by English mechanics. Instead of coat and waistcoat, he wore a garment something like a fisherman’s guernsey, and over this a coarse short cloak, picturesque in appearance as it was buffeted by the wind. His trousers were of moleskin; his boots reached almost to his knees; for head-covering he had the cheapest kind of undyed felt, its form exactly that of the old petasus. To say that his aspect was Venerable would serve to present him in a measure, yet would not be wholly accurate, for there was too much of past struggle and present anxiety in his countenance to permit full expression of the natural dignity of the features. It was a fine face and might have been distinctly noble, but circumstances had marred the purpose of Nature; you perceived that his cares had too often been of the kind which are created by ignoble necessities, such as leave to most men of his standing a bare humanity of visage. He had long thin white hair; his beard was short and merely grizzled. In his left hand he carried a bundle, which probably contained clothing.

The burial-ground by which he had paused was as little restful to the eye as are most of those discoverable in the byways of London. The small trees that grew about it shivered in their leaflessness; the rank grass was wan under the failing day; most of the stones leaned this way or that, emblems of neglect (they were very white at the top, and darkened downwards till the damp soil made them black), and certain cats and dogs were prowling or sporting among the graves. At this corner the east wind blew with malice such as it never puts forth save where there are poorly clad people to be pierced; it swept before it thin clouds of unsavoury dust, mingled with the light refuse of the streets. Above the shapeless houses night was signalling a murky approach; the sky–if sky it could be called–gave threatening of sleet, perchance of snow. And on every side was the rumble of traffic, the voiceful evidence of toil and of poverty; hawkers were crying their goods; the inevitable organ was clanging before a public-house hard by; the crumpet-man was hastening along, with monotonous ringing of his bell and hoarse rhythmic wail.

The old man had fixed his eyes half absently on the inscription of a gravestone near him; a lean cat springing out between the iron railings seemed to recall his attention, and with a slight sigh he went forward along the narrow street which is called St. James’s Walk. In a few minutes he had reached the end of it, and found himself facing a high grey-brick wall, wherein, at this point, was an arched gateway closed with black doors. He looked at the gateway, then fixed his gaze on something that stood just above–something which the dusk half concealed, and by so doing made more impressive. It was the sculptured counterfeit of a human face, that of a man distraught with agony. The eyes stared wildly from their sockets, the hair struggled in maniac disorder, the forehead was wrung with torture, the cheeks sunken, the throat fearsomely wasted, and from the wide lips there seemed to be issuing a horrible cry. Above this hideous effigy was carved the legend: ‘MIDDLESEX HOUSE OF DETENTION.’

Something more than pain came to the old man’s face as he looked and pondered; his lips trembled like those of one in anger, and his eyes had a stern resentful gleaming. He walked on a few paces, then suddenly stopped where a woman was standing at an open door.

‘I ask your pardon,’ he said, addressing her with the courtesy which owes nothing to refined intercourse, ‘but do you by chance know anyone of the name of Snowdon hereabouts?’

The woman replied with a brief negative; she smiled at the appearance of the questioner, and, with the vulgar instinct, looked about for someone to share her amusement.

‘Better inquire at the ‘ouse at the corner,’ she added, as the man was moving away. ‘They’ve been here a long time, I b’lieve.’

He accepted her advice. But the people at the public-house could not aid his search. He thanked them, paused for a moment with his eyes down, then again sighed slightly and went forth into the gathering gloom.