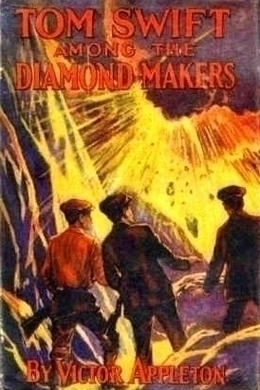 Tom Swift Among the Diamond Makers

The Secret of Phantom Mountain

While young Tom Swift is in a jewelry store shopping for a ring for Mary, he meets a man who claims to be willing to teach Tom how to make diamonds. Later, the man (who happens to be one of the party that Tom rescued in the book Tom Swift and his Wireless Message) tells Tom his story – how he was approached by a group of men who knew how to make diamonds, how he actually watched them make diamonds, and how he gave them some money, and how they dumped him (but not before giving him a fortune in diamonds). The man urges Tom to go with him on a hunt for these diamond makers. (source: TomSwift info)

“Well, Tom Swift, I don’t believe you will make any mistake if you buy that diamond,” said the jeweler to a young man who was inspecting a tray of pins, set with the sparkling stones. “It is of the first water, and without a flaw.”

“It certainly seems so, Mr. Track. I don’t know much about diamonds, and I’m depending on you. But this one looks to be all right.”

“Er–no–that is, not exactly,” and Tom Swift, the young inventor of airships and submarines, blushed slightly.

“Ah, I see. It’s for your housekeeper, Mrs. Baggert. Well, I think she would like a pin of this sort. True, it’s rather expensive, but–”

“No, it isn’t for Mrs. Baggert, Mr. Track,” and Tom seemed a bit embarrassed.

“No? Well, then, Tom–of course it’s none of my affair, except to sell you a good stone, But if this brooch is for a young lady, I can’t recommend anything nicer. Do you think you will take this; or do you prefer to look at some others?”

Tom’s words were interrupted by a sudden action on the part of the jeweler. Mr. Track ran from behind the showcase and hastened toward the front door.

“Who?” asked the lad, following the shopkeeper.

“That man. He’s been walking up and down in front of my place for the last ten minutes–ever since you’ve been in here, in fact, and I don’t like his looks.”

“Nothing much, except to stare in here as if he was sizing my place up.”

“Yes. Getting the lay of the land, so he or some confederate could commit a robbery, maybe.”

“A robbery? Do you think that man was a thief?”

“I don’t know that he was, Tom, and yet a jeweler has to be always on the watch, and that isn’t a joke, either, Tom Swift. Swindlers and thieves are always on the alert for a chance to rob a jewelry store, and they work many games.”

“I didn’t notice any particular man looking in here,” said Tom, who still held the diamond brooch in his hand.

“Well I did,” went on the jeweler. “I happened to glance out of the window when you were looking at the pins, and I saw his eyes staring in here in a suspicious manner. He may have a confederate with him, and, when you’re gone, one may come in, and pretend to want to look at some diamonds. Then, when I’m showing him some, the other man will enter, engage my attention, and the first man will slip out with a diamond ring or pin. It’s often done.”

“You seem to have it all worked out, Mr. Track,” observed the lad, with a smile. “How do you know but what I’m in with a gang of thieves, and that I’m only pretending to want to buy a diamond pin?”

“Oh, I guess I haven’t known you, Tom Swift, ever since you were big enough to toddle, not to be sure about what you’re up to. But I certainly didn’t like the looks of that man. However, let’s forget about him. He seems to have gone down the street, and, after all, perhaps I was mistaken. Just wait until I show you a few more styles before you decide. The young lady may like one of these,” and the jeweler went to another showcase and took out some more trays of brooches.

“What makes you think she’s a young lady, Mr. Track?” asked the lad.

“Oh, it’s easy guessing, Tom. We jewelers are good readers of character. I can size up a young fellow coming in here to buy an engagement or a wedding ring, as soon as he enters the door. I suppose you’ll soon be in the market for one of those, Tom, if all the reports I hear about you are true–you and a certain Mary Nestor.”

“I–er–I think I don’t care for any of these pins,” spoke Tom, quickly, with a blush. “I like the first lot best. I think I’ll take the one I had in my hand when that man alarmed you. Ha! That’s odd! What did I do with it?”

Tom looked about on the showcase, and glanced down on the floor. He had mislaid the brooch, but the jeweler, with a laugh, lifted it out of a tray a moment later.

With an exclamation, Mr. Track gave a hasty glance toward his big show window. Tom looked up, and saw a man’s face peering in. At the sight of it, he, too, uttered a cry of surprise.

The next instant the man outside knocked on the glass, apparently with a piece of metal, making a sharp sound. As soon as he heard it, the jeweler once more sprang from behind the showcase, and leaped for the door crying:

“There’s the thief! He’s trying to cut a hole through my show window and reach in and get something! It’s an old trick. I’ll get the police! Tom, you stay here on guard!” and before the lad could utter a protest, the jeweler had opened the door, and was speeding down the street in the gathering darkness.