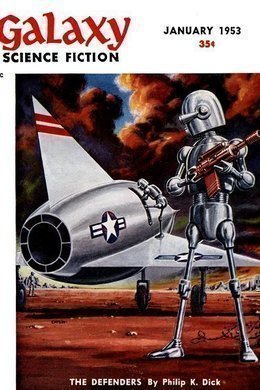 After a devastating war between the United States and the Soviet Union mankind has taken refuge beneath Earth’s surface. But the war continues above ground, with robots called “leadys” fighting on our behalf, or so the humans think. The Defenders was later expanded into a full-length novel entitled The Penultimate Truth, published in 1964.

Taylor sat back in his chair reading the morning newspaper. The warm kitchen and the smell of coffee blended with the comfort of not having to go to work. This was his Rest Period, the first for a long time, and he was glad of it. He folded the second section back, sighing with contentment.

“What is it?” Mary said, from the stove.

“They pasted Moscow again last night.” Taylor nodded his head in approval. “Gave it a real pounding. One of those R-H bombs. It’s about time.”

He nodded again, feeling the full comfort of the kitchen, the presence of his plump, attractive wife, the breakfast dishes and coffee. This was relaxation. And the war news was good, good and satisfying. He could feel a justifiable glow at the news, a sense of pride and personal accomplishment. After all, he was an integral part of the war program, not just another factory worker lugging a cart of scrap, but a technician, one of those who designed and planned the nerve-trunk of the war.

“It says they have the new subs almost perfected. Wait until they get those going.” He smacked his lips with anticipation. “When they start shelling from underwater, the Soviets are sure going to be surprised.”

“They’re doing a wonderful job,” Mary agreed vaguely. “Do you know what we saw today? Our team is getting a leady to show to the school children. I saw the leady, but only for a moment. It’s good for the children to see what their contributions are going for, don’t you think?”

She looked around at him.

“A leady,” Taylor murmured. He put the newspaper slowly down. “Well, make sure it’s decontaminated properly. We don’t want to take any chances.”

“Oh, they always bathe them when they’re brought down from the surface,” Mary said. “They wouldn’t think of letting them down without the bath. Would they?” She hesitated, thinking back. “Don, you know, it makes me remember–”

He knew what she was thinking. Once in the very first weeks of the war, before everyone had been evacuated from the surface, they had seen a hospital train discharging the wounded, people who had been showered with sleet. He remembered the way they had looked, the expression on their faces, or as much of their faces as was left. It had not been a pleasant sight.

Taylor looked up at his wife. She was thinking too much about it, the last few months. They all were.

“Forget it,” he said. “It’s all in the past. There isn’t anybody up there now but the leadys, and they don’t mind.”

“But just the same, I hope they’re careful when they let one of them down here. If one were still hot–”

He laughed, pushing himself away from the table. “Forget it. This is a wonderful moment; I’ll be home for the next two shifts. Nothing to do but sit around and take things easy. Maybe we can take in a show. Okay?”

“But don’t you want to know what’s going on? No human beings are getting hurt, you know.”